A Delay in LIBOR’s Sunset?

Last Week: Interest rates were mixed, and equities advanced substantially over the past week as more sectors throughout the world economy reopened with optimism that a coronavirus vaccine will be available late this year or early next. However, growing friction between the US and China did serve to temper spirits late in the week. The yield on the US 10-year Treasury note fell four basis points to wrap the week at 0.65% while 1-month LIBOR rose two basis points to 0.18%.  The price of a barrel of West Texas Intermediate crude oil added a dollar, rising to $33.50, as the US Dollar weakened, and Gold traded flat. Treasury yield volatility, a key component in the cost of rate caps and interest rate swaptions, held steady at 4.71.

Green shoots of recovery multiplied. A surge in government transfer payments pushed a tremendous amount of money into consumers’ pocketbooks, but COVID-19 lockdowns limited their ability to spend it.  Personal income soared in April, rising 10.5%, while spending plummeted 13.6%, the largest monthly drop on record. As a result, the savings rate nearly doubled to a historic high, coming in at a whopping 33%. It suggests that consumers will have plenty of purchasing power as the economy reopens. The question now: Will they have enough confidence in the future to spend it? Consumer confidence – or a lack thereof, will likely limit the extent of a rebound in consumer spending and GDP growth overall through at least the fall. Why it matters: Consumer’s spending activity is responsible for 75% of US economic activity; if the consumer hunkers down, so will the US economy.

Elsewhere, 2.1 million Americans filed claims for unemployment benefits, but continuing jobless claims dropped by 5 million, suggesting jobs are being brought back online amid re-opening efforts. Rounding out the data for the week, April durable goods orders fell 17.2% while the Q1 gross domestic product was revised to -5% from -4.8%. All told, the April data reflected the state of the economy during the peak of Covid-19 lockdowns, and imply that lingering uncertainty amid massive unemployment will restrain consumer activity and business investment through year-end, sharply reducing the odds of a “V- shaped” recovery in the second half.

Economic reopening picks up steam – higher rates on the horizon? While public health officials remain cautious, the phased reopening of many state’s economies continued as restrictions eased further. Measures of activity, such as the movements of mobile phones, show that people are leaving their homes in increasing numbers. While hotel occupancy is still very low, companies are reporting that it has ticked up, as has airline travel. The boost in activity is also spurring a positive shift in market sentiment and allows us to begin seeing what the other side of America’s worst-ever economic downturn could mean for interest rates.

The first place to look is the US Treasury yield curve from 5 to 30-year maturities, which ended the month close to the steepest since the pandemic-driven market panic started more than two months ago. The gap between 5 and 30-year yields surged to end last week at 110 basis points, touching the widest since mid-March. What’s going on? Traders are betting short-to-medium term rates will be anchored at ultra-low levels by Fed stimulus, including potential steps such as capping yields, aka “Curve Sculpting.” At the same time, the steepening yield curve gives an indication that longer-term rates, like the 10-, 20- and 30-year Treasury yields, may be headed higher as more green shoots of economic recovery emerge. The massive sales of new Treasury bonds by the US Treasury to pay for all the fiscal stimulus is only adding momentum to long term yields’ push higher. Both dynamics, working together, equate to a steeper Treasury yield curve.

While the momentum for higher longer-term rates is certainly building, any move higher will eventually hit a brick wall: The Fed.  Any substantial rise in long-term rates in a fragile economy would hurt companies trying to roll over debt, crimp prospects of re-hiring by businesses, etc.; dynamics that run counter to the Fed’s stimulus intentions. As such, should long-term yields embark on a sustained move higher, the Fed will act – via curve sculpting or some other mechanism – to keep long term yields low. Need a primer on yield curves? Get it here: The Yield Curve: What You’ve Always Wanted to Know but Were Afraid to Ask

LIBOR’s sunset delayed? Don’t bet in on it. There have been rumblings of late in financial circles that COVID-19 may spur a delay in LIBOR’s planned sunset at the end of 2021. Over the past few weeks, European and global authorities have pushed back some of their regulatory work and deadlines because of the outbreak, the logic being that proceeding with them could force companies to divert resources from more urgent, pandemic-related matters. There seems to be a logic to the delays, with regulators pushing back measures that are considered to be less urgent or those that still can be implemented within the original time scale but with some delays in the interim stages.

Despite the deadline being over 17 months away, markets are still far from prepared to operate without LIBOR. Many contracts maturing beyond 2021, including long-term derivatives like interest rate caps and swaps, still reference LIBOR, and the benchmark continues to dominate loan markets in particular. As such, we think that regulators view the transition away from LIBOR as a top priority despite the pandemic, and with all the work that still lies ahead to get there, a delay in the “end of 2021” deadline for the planned LIBOR phase-out simply won’t happen. Need a roadmap for the LIBOR transition? Check out our LIBOR Transition Cheat Sheet.

What to Watch This Week: The key economic data releases this week are the ISM manufacturing index on Monday, the ISM non-manufacturing index on Wednesday, the jobless claims report on Thursday, and the employment report on Friday. There are no scheduled speaking engagements from Fed officials this week, reflecting the FOMC blackout period ahead of its June 10th monetary policy meeting. This Friday’s May jobs report will dominate the calendar. Historically the most influential piece of economic data on interest rates, the report will feature a smaller – but still devastating – drop in jobs following a record plunge in April, with the unemployment rate surging to highs not seen since the Great Depression.

We’re estimating that 6 million jobs were lost in May, after a eye-watering 20.5 million slump in April, reflecting not only continued job losses in the industries that were front and center of the COVID crisis in March and April, like leisure and hospitality, but also a new wave of job losses in more tangential industries due to a significant and prolonged loss of demand. We suspect the unemployment rate will have peaked in May at 20% and slip back in June to average around 18% for all of Q2.

Looking ahead, we expect the unemployment rate to fall toward 10% by year-end. If we’re correct, it would be an impressive recovery of sorts no doubt, but an incomplete one, given that a significant share of the workforce will still be left jobless at year’s end. One can’t spend confidently without a job, and without a broad resurgence in spending, the pace of economic recovery will be slow.

Big Picture: Last week delivered a reminder of what could limit the upside in interest rates, with President Trump intensifying his punishment of China for its initial handling of the COVID-19 outbreak. The President has moved in recent weeks to sanction Chinese officials for mistreating Uighurs, a Muslim minority in Xinjiang, blocking pension funds from investing in companies in China and clamping down on rules for those firms listed on U.S. stock exchanges.

An escalation of tensions between the world’s two biggest economies threatens to curb demand for risky assets, like stocks, and bolster the appetite for Treasuries, which adds an impediment to any move higher in interest rates. Should the tensions continue to escalate, they could eventually overshadow any improving sentiment from easing coronavirus lockdowns. We expect the persistent US-China confrontations to escalate and be with us for years, and as such, garner greater influence over the direction of interest rates. Given that its direction is unpredictable, ignore the evolving US-China story at your peril.

Finally, one can’t ignore the mass protests (peaceful and violent) and the destruction to businesses across the country.  How long will the protests last?  Consider the fact that millions of people are out of work.  Could the mass gathering of people be the impetus for a second wave of infections?  Let’s hope not. 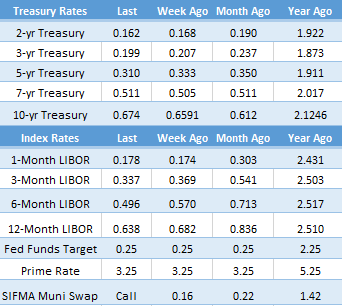 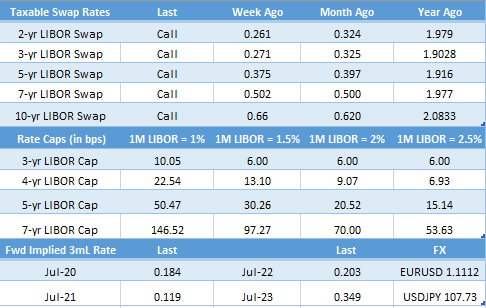