Last Week: US Interest Rates and equities extended their gains, driven higher by a backdrop of improved economic growth, particularly in Europe. Oil fell to a six-month low to $45.50, the US Dollar and Gold also fell slightly. The yield on the US 10-year Treasury note rose modestly, to 2.35%, up 4 basis points on the week, while 1-month LIBOR drifted higher, to .9944% from .9928 the week prior. Market volatility, as measured by the Chicago Board Options Exchange Volatility Index (VIX), held steady at historic lows near 10.

The Fed held interest rates steady. In a widely-expected decision, the Fed held rates steady, and stated, as everyone had hoped, that weakness in the US economy in Q1 was likely “transitory”.

America’s Job Engine Motors On. Last Friday’s US employment report was upbeat, with 211K added to payrolls in April versus a downwardly revised 79K in March. We forecasted 170K. The unemployment rate fell to a 4.4%, a 10-year low, though average hourly earnings rose a less-than-expected 2.5%, a major blemish on an otherwise stellar report. While yields failed to get much of a spark out of the solid data, it will help pave the road for a Fed rate hike in June.

The European economy finally kicked into gear. Economic growth in the eurozone grew at a 1.8% annualized pace in Q1, outstripping US growth, which posted an anemic 0.7% pace over the same period. Purchasing managers’ indices reported this week suggest that European growth might be accelerating further.

Macron wins the French Presidential Election. Why should you care? His victory significantly reduces the chances France will leave the EU, avoiding yet another fly in the ointment to a projected future of continuing global growth, higher inflation and higher US interest rates.

This Week: Friday’s release of Retail Sales data for April will steal the show, as market watchers seek evidence that consumer activity is indeed rebounding in Q2 following Q1’s pause that derailed Q1 GDP growth. The stakes for Retail Sales this time around are high after a couple of weak showings from the likes of auto sales and general purchases which failed to rebound from a weak, weather-induced slump in March. Regardless, we’re expecting a strong showing in Retail Sales this time around after the acceleration in consumer income growth in the latest jobs report combined with the recent recovery in retail hiring.

The Consumer Price Index (CPI), also set for release on Friday, will also be closely watched this week after last week’s jobs report showed little growth in wages, causing many to begin to question whether the Fed’s 2.0% inflation target can be reached, and further, if the expected June rate hike could be delayed.

Take-Away: Two events from last week solidified the increasing odds of a 0.25% Fed rate hike in June. First, last Friday’s solid jobs report greatly supported the Fed’s recent characterization of US economic weakness in Q1 as “transitory”. Second, the report’s evidence of a rebound in hiring and solid income gains showed that, for now at least, hiring hasn’t fallen off a cliff and we’ll likely see a pick-up in consumer spending in short order. This week’s Retail Sales and CPI data will provide the first major evidence of this scenario playing out. Until then, interest rates will likely remain adrift, seeking a definitive event or data to set a clear direction.

In the larger and more long term picture, the Fed’s plans for unwinding its massive balance sheet could have implications on how much and how many hikes we’ll see from the Fed over the next couple of years, as any sales of securities by the Fed are seen as taking the place of any needed rate hikes. We’ll provide more analysis as the Fed’s plans become clearer, but don’t expect to see anything concrete until Fed Funds is 1.50%, or a couple of 0.25% rate hikes from now. 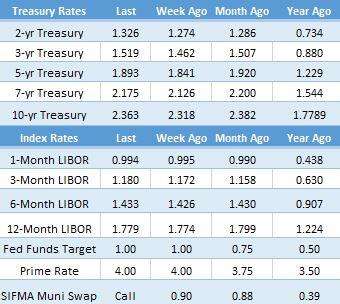 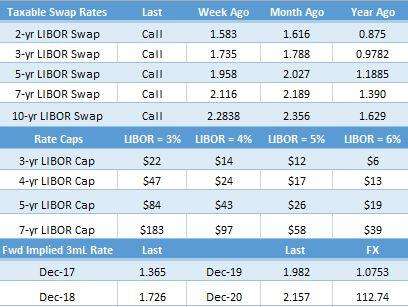 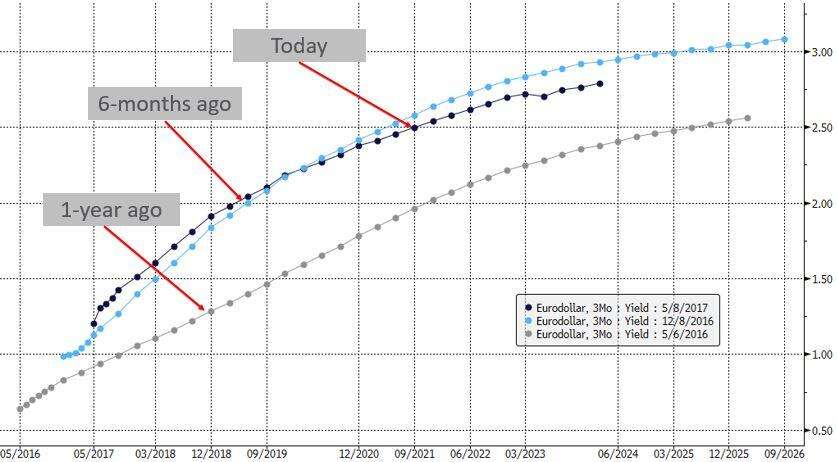 All charts sourced via Bloomberg Professional.

Green Light for a June Hike
Scroll to top