Last Week: Interest rates rose, and equities extended their recent advance, fueled by signs of a strong economy in the data and an apparent indifference to growing trade tensions. The yield on the US 10-year note continued to rise, coming in at 3.08%, eight basis points above last week’s reading and near the top of this year’s trading range. 1-month LIBOR also continued its ascent, rising to 2.21% in anticipation of the looming Fed hike this week. Oil rose $3.50 a barrel to $71.12 amid concerns over supply disruptions from Venezuela and Iran, as the US Dollar weakened and Gold traded flat. Treasury yield volatility, as measured by the Chicago Board Options Exchange Treasury Volatility Index (TYVIX), rose to 3.54 from 3.27 a week ago.

Trade war with China ramps up – again. The US imposed additional tariffs on a list of imports from China worth $200 billion, bringing the total tally of tariffed goods to $250 billion. President Trump threatened to impose levies on an additional $267 billion worth of Chinese goods – essentially tariffing all US imports from China – if the country retaliates against the latest duties. Markets took the move in stride and showed some relief that the tariff rate will be only 10% through the end of 2018 before rising to 25% in 2019 if no trade deal is reached before January 1st. China retaliated against Washington’s move by imposing 5%–10% duties on $60 billion in imports from the US and has now placed tariffs on a total of $110 billion of US goods compared with total US exports to China of $135 billion last year. With the two sides not talking, and few opportunities for a Trump-Xi meeting where the leaders could thrash out a deal, it looks increasingly likely that all imports from China will be subject to a 25% tariff by early next year.

While the trade topic will dominate headlines for the rest of the year, China will ultimately cave to many US demands, as its economy is far less diversified than America’s and is already showing negative aberrations due to the prolonged conflict. Even though we expect very little US economic fallout from the trade conflict with China, the first place it should show up is in the pace of US manufacturing, which has proved surprisingly resilient thus far. The main problem for now is that there appears to be no end-game in sight. With little sign that China will be coaxed back to the negotiating table, the next step may be even higher tariff rates. Ignore the trade conflict’s possible effects on (likely higher) yields to your detriment.

Markets shrugging off trade worries – thus far. If the escalating US-China trade battle is a concern for markets, it is not showing up in prices. The S&P 500 Index and Dow Jones Industrial Average both posted record highs last Thursday. Solid core economic data helped, as well as a modest decline in the value of the dollar and a continued drop in jobless claims to a fresh 49-year low.

OECD dialed back its global growth view. On the back of growing concern that escalating trade conflicts could inhibit confidence, investment, and ultimately economic growth, the Paris-based Organization for Economic Co-operation and Development (OECD) modestly downgraded its 2018 and 2019 global economic growth forecasts, trimming its 2018 outlook to 3.7% from 3.9% previously while cutting its 2019 view to 3.7% from 3.8%.

What to Watch This Week: Aside from the Trump administration’s imposition of the next wave of Chinese tariffs today, the main event of the week will be Wednesday’s September FOMC meeting. A 0.25% rate hike is virtually guaranteed, thus the focus of the meeting will be on the future course of Fed policy, chiefly speculation on what the Fed will do in December.  Specifically, markets will be focused on whether the Fed will retain optionality around a 0.25% December hike. While markets are already pricing a 75% probability of such a move, market sentiment will likely gel around this view if the Fed intimates such via official data it releases during this week’s meeting. We still expect another four, 0.25% Fed hikes (including the next one this week), one every quarter, until we end the current hiking cycle with the federal funds target range at 3.00-3.25% by the end of 2019, during which the 10-year Treasury yield will peak somewhere near 3.25%.

The post-meeting press conference will be closely watched, but we expect Chair Jerome Powell to stick to his gradual rate hike mantra. On the data front, evidence of fallout from Hurricane Florence will begin to materialize in this week’s economic data. While we don’t expect much impact on third-quarter GDP, some of the short-term data sets – like weekly jobless claims – will be wobbly for weeks to come as the effects of the storm make their way through the economy. In case you’re wondering, we doubt this month’s jobs report will be impacted, and all-told, the storm will have little sustained economic impact nor consequence for monetary policy.

Take-Away: Interest rates have been on a sustained march higher for the past year; the 2-year Treasury yield climbed to 2.82% last week, up from 2.00% six-months ago and 2.62% at the beginning of September. The 10-year yield reached 3.08% last week, up from 2.80% six months ago and 2.84% and since the beginning of the month. 1-month LIBOR has been on a steady, near nonstop ascent since late 2016. It looks as if rates will climb further in the next year, with Fed funds futures now pricing in two rate hikes this year (including this week’s FOMC meeting) and two next year, likely in the first half of 2019.

Higher rates have been feeding through the economy for months now, equating to higher borrowing costs for households and businesses. When the Fed began raising interest rates in December 2015, interest rates on credit card debt, vehicle purchases, and mortgages started to trend modestly higher, but in the past year or so, they have surged, leaving us with the billion-dollar question: Once the sugar-high from tax reform wears off, when will consumers and business start to pull back on the throttle?  Of course, no one really knows, but one thing is likely: once the boost from fiscal stimulus begins to fade – probably in the middle of next year at the latest – we expect to see broad consistent signs that consumption in rate-sensitive sectors is slowing. 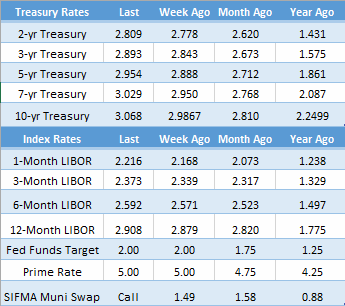 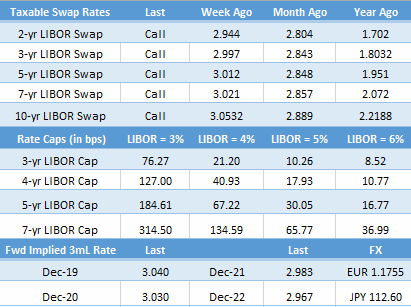 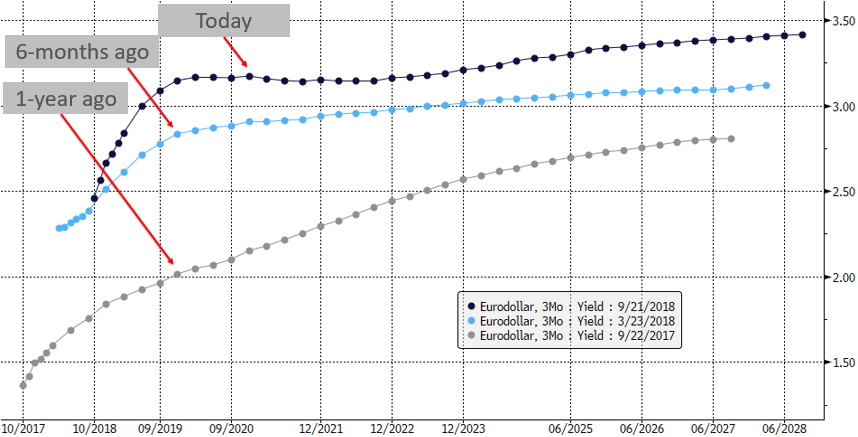 Fed Hikes to Continue Well Into 2019
Scroll to top