Last Week: Interest rates were up notably amid summer’s last hurrah, strong US economic data and a constant drone of political and trade-related headlines. The yield on the US 10-year Treasury note edged up 6 basis points to 2.94% while 1-month LIBOR continued its steady ascent higher ahead of this month’s looming Fed hike, wrapping the week at 2.13%. Oil fell $2.12 to $67.75 a barrel, the US Dollar traded flat, and Gold strengthened. Treasury market volatility, as measured by the Chicago Board Options Exchange Treasury Volatility Index (TYVIX), fell to 3.58 from 3.81 a week ago.

Unemployment data all but guarantees a Fed hike on 9/26. Last Friday’s release of August jobs data showed a 201K increase in jobs, an unchanged unemployment rate at 3.9%, and mostly importantly, a surge in wage gains to a nine-year high. The headline gain in job creation was a little stronger than the consensus estimates of 190,000, although the good news was sullied somewhat by downward revisions to employment growth in previous months. Most of the new jobs created last month emanated from the business services and education sectors of the economy, while the manufacturing, retail and information sectors all shed jobs. While a one-month set of data certainly does not make a trend, we expect increases in consumer wages to continue, which will eventually translate into rising inflation over time and embolden the Fed to keep hiking. For the near term, a 0.25% Fed hike on 9/26 is virtually guaranteed.

US trade data showed how recent tariffs may begin weighing on the US economy. US trade data for July released last week showed a widening gap that increased the most in three years as our trade deficit with China worsened to the widest gap ever. America’s trade gap widened 9.5% to $50.1 billion, the biggest since February, from a revised $45.7 billion in June. US exports fell 1%, driven by steep drops in aircraft and soybeans, while imports rose 0.9% in a broad-based gain, driven higher by all of us feeling good and buying stuff made elsewhere.

US-Mexico trade tensions eased while Trump amped up the pressure on China. After verbally agreeing on a trade pact with Mexico and seeing the widening trade gap with China, the Trump administration continued to saber-rattle on trade tariffs with Canada and China, publicly entertaining the notion of expanding Chinese tariffs by another $267 billion, in addition to the proposed tariffs covering $200 billion of Chinese exports. Given that China only imports about $140 billion of US goods, the move would effectively levy tariffs on the entire spectrum of Chinese exports to the US. If imposed, China could only respond by imposing non-trade barriers on US companies – things like regulatory harassment – as retaliation.  As we’ve said repeatedly, the trade topic will likely dominate headlines for the rest of the year, with China likely being the final hold-out to a deal with the US. China will ultimately cave to many US demands however, as its economy is far less resilient to a drawn-out US trade conflict.

The news was a reversal from the narrowing trade deficits seen in Q2 – before the first trade tariffs were imposed – which heavily contributed to the fastest pace of US economic growth since 2014. Sure, news about the deficit is admittedly boring, but the important point here is that if the trade deficit keeps widening – likely given the increasing tit-for-tat rounds of tariffs with China – it will begin to drag on US economic growth and reveal how tariffs are negatively impacting the economy. The offset to this dynamic is the continuation of a stronger domestic economy, which should more than counter the negative impacts of widening trade deficits. For now, with domestic demand holding up well, US GDP growth looks set to remain unusually strong in Q3, around 3.2% annualized.

What to Watch this Week:  The days ahead are packed with a full docket of important data releases which will help to clarify the Fed’s hiking path for the rest of the year. Most importantly, last week’s upside surprise in wages has now prompted markets to lend laser-like focus on incoming inflation data, including this week’s reports on producer prices (Wednesday), consumer prices (Thursday), import prices (Friday) and consumer inflation expectations (Friday).  In summary, we expect the data to show inflationary pressures continuing to build, giving the Fed full confidence to hike at the end of the month and begin to broadcast its intentions to hike at least three more times before this time next year.

Outside of the inflation theme, other data on retail sales, industrial production and business inventories this week will provide important guidance on the pace of economic growth this quarter, which again, we expect to peak out somewhere near 3.5% – well below Q2’s 4.1% pace – as many of the elements which boosted Q2 GDP above 4%  – like tax reform – are unlikely to repeat in Q3.

Take-Away: With activity booming and jobs growth strong and humming along, the recent spike in wages is the long awaited but previously missing ingredient to the possibility of sustained inflation and consistent future Fed rate hikes well into 2019. One month of solid wage growth doesn’t establish a trend however, and it will take several more months of such to convince the Fed that inflation is truly headed to a steeper trajectory. If wage increases continue, they will provide important reassurance to the Fed that increasing labor scarcity is finally driving up labor costs and more rate hikes are indeed warranted. While a Fed hike in two weeks’ time is a near certainty, we’re leaning toward the expectation the Fed will continue hiking rates once a quarter until the middle of next year. 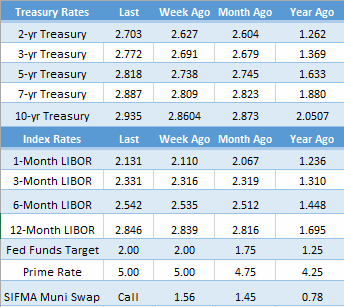 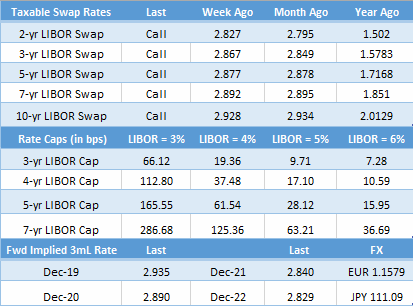 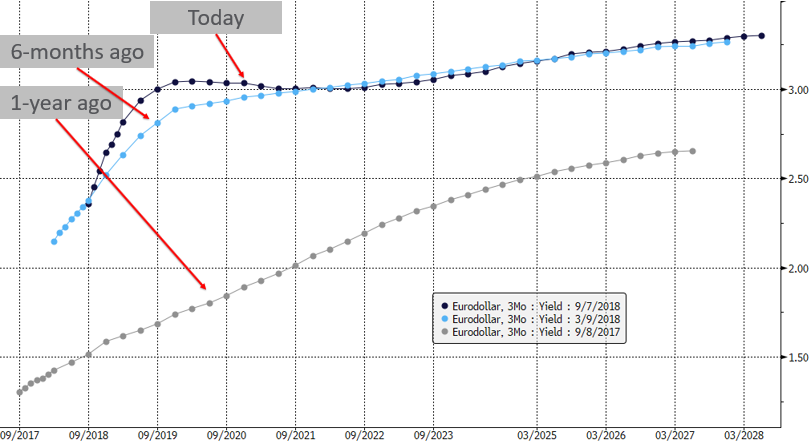