Last Week: Interest rates were mixed, and global equities continued to trend lower amid ongoing concerns about the Turkish currency crisis and global trade. The 10-year US Treasury yield fell from its peak of 2.89% early in the week to 2.86% by week’s end, while 1-month LIBOR wrapped the week at 2.0693%, slightly higher than its 2.0600% mid-week low. Oil fell slightly to $65.60, the US Dollar weakened, and Gold traded flat. Treasury market volatility, as measured by the Chicago Board Options Exchange Treasury Volatility Index (TYVIX), fell to 3.87 from 4.15 this time last week. All told, markets took their cues from developments overseas, with the deepening crisis in Turkey and fears of contagion to other emerging markets strengthening the US dollar and causing bond yields to fall.

Qatar bailed out Turkey. Turkey secured a $15 billion investment from Qatar to help fund economic projects, investments and deposits. While responding positively initially from the news, the Turkish lira weakened anew and is now down more than 35% against the dollar this year, as pressures from the political spat with the US remain elevated. Now that we’re two weeks into the crisis, the end game is becoming increasingly tame: most believe that the Turkish government will be able to contain and fix the issues if they make a few basic macroeconomic moves, such as tightening monetary and fiscal policy. However, Turkish President Erdogan has been unwilling to take those initial steps. As we’ve said before, although Turkey seems a world away, Europe’s exposure to it have and will continue to directly influence the direction of US Treasury yields in an unpredictable way.

Progress on the US/China trade front. After more than two months without talks, the US and China announced that they will meet in late August for lower-level trade talks, which hinted at progress towards resolving the spiraling trade dispute and prompted market optimism that the resumption of talks could signal an end to the growing trade war. Though a positive sign, it is unlikely that the talks will lead to a breakthrough given the low level of the communications. Ultimately, we still believe China will cave to US demands as its economy, while increasingly mature, is far less resilient to tariffs than the US.

Strong retail sales power US economic growth. Retail sales grew 0.5% in July, far more than economists’ forecast of 0.1% MoM. On a year-over-year basis, sales grew by 6.4%, more than doubling the pace of inflation, as robust hiring, low unemployment and tax cuts provide households with more disposable income. In addition, the strong demand boosted manufacturing output by 0.3% in July and 2.8% year-over-year. The strong economic outlook will give the Fed increasing confidence to hike rates in September and December, and at least twice more in 2019.

US household debt reached a record high. Here we go again. Sure, everyone’s feeling good and is out there buying stuff, but with wage growth mostly flatlined, it seems many are going into debt to buy those shiny new things.  According to researchers at the Federal Reserve Bank of New York, US household debt rose 3.5% in the second quarter of 2018 from a year earlier, reaching a record $13.2 trillion. Consumer debt has been trending higher since the first quarter of 2013 and has increased for 16 consecutive quarters. While borrowing advanced, loan delinquencies fell in Q2, primarily due to the strong labor market.

What to Watch This Week: With a light docket of economic data in the coming days, the gathering of Fed officials in Jackson Hole, Wyoming will loom large in the eyes and ears of markets.

While the regularly scheduled meeting of Fed officials and global central bankers will feature a review of academic research on “Changing Market Structure and Implications for Monetary Policy,” (read: boring), the headline event will be Fed Chairman Jerome Powell’s speech titled, “Monetary Policy in a Changing Economy.”  In his speech, Chair Powell is expected to focus on longer-term structural changes in the economy, such as the sluggish rebound in productivity growth and the lack of inflation amid a roaring job market. Chair Powell may also lend some insight into what Fed officials think the optimal size of its balance sheet could be in the long run. We’ll be listening intently for clues as to whether the Fed is reconsidering its course of near-term rate hikes in 2018 and 2019.

Take-Away: While the Turkey issue could whipsaw Treasury yields in unpredictable ways in the near term, at the end of the day the vulnerabilities that are contributing to market nervousness are not widely shared among emerging markets, suggesting that the possibility that Turkey’s troubles will spread to other countries is limited. As such, we doubt that events overseas will be significant enough to discourage the Fed from following through on its plans to hike rate further, especially with economic growth on a tear and inflation accelerating.

While everyone expects a 0.25% hike in September, markets remain uncertain about another in December while anticipating at least one more in 2019.  We believe the Fed is happy keeping everyone guessing and enjoys retaining some optionality in the December and 2019 path for further rate hikes. We expect the Fed to wait and see how the economy and labor market perform in the second half of the year as escalating trade tensions offset at least some of the economic gains expected from tax reforms. The midterm elections in early November loom large in the probability for a December hike, and the Fed will wait and see how they play out before intimating its intentions for December. 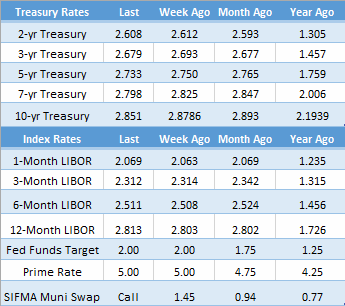 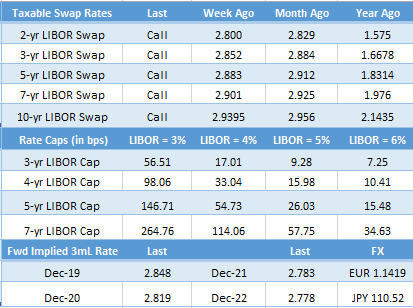 LIBOR Replaced By SOFR – So Far, So Good?
Scroll to top