All Eyes on Jackson Hole as Taper Inches Closer

What You Missed: Long-term interest rates fell slightly while equities receded from record territory following reports that China’s economy is under pressure, retail sales declined, and the Fed is considering tapering its bond purchases this year. Treasuries continued to see-saw as the yield on the 10-year note declined to 1.25% from 1.31% last week. Short-term rates, like 1-month LIBOR, SOFR and BSBY, also fell slightly, hovering just above record lows. The price of a barrel of West Texas Intermediate crude oil dropped to $62.84 from $68.93, as the US Dollar strengthened, and Gold weakened. Treasury yield volatility, a key driver of the cost of rate caps and other option-based interest rate derivatives, fell slightly.

Fed minutes revealed taper plans. In the meeting minutes from the Fed’s July meeting, released last Wednesday, most Fed officials agreed they could start reducing, aka “tapering”, the pace of their bond-buying purchases this year because they had hit their inflation goal and were closer to reaching their standard for progress on reducing unemployment (new to the tapering conversation? Get up to speed HERE and HERE).

The minutes also dashed speculation that the Fed, when it does taper, will scale back its purchases of mortgage-backed securities (MBS) more or less than it would its purchases of Treasury securities. Previously, some in the markets had speculated that the Fed may focus its tapering on MBS securities at a faster pace the Treasury bonds, to take some off the momentum out of the red-hot housing market. Finally, the minutes also made clear that any taper actions aren’t intended to be a signal on the timing of rate hikes as well.

Our take: While the minutes confirmed they see the current bout of inflation as transitory, and therefore holds little influence on their decision on the timing and scope of a taper, the Fed feels there is still more work to do on its other, more important mandate: creating jobs. Despite strong job gains, averaging 617k a month through July this year, broader measures still show slack in the jobs market. As such, we suspect the Fed will signal an impending taper at its September 22nd policy meeting and make a formal announcement at its November meeting. The fly in the rose’? A derailing of job growth in the interim due to the Delta variant.

Whether its September or November, a tapering announcement is well expected at this point. For markets, the real issue is when the Fed will hike interest rates. Tapering is about reducing stimulus, but a rate hike is outright tightening. For the Fed, the challenge is to delink its tapering and interest rate hike activity in the minds of markets. The bar for the latter is higher than the former, and the Fed will need to go out of its way to communicate it clearly. If its successful, it can taper while still sending a easy-money signal about the pace of rate hikes in 2022 or 2023. While a blooming delta variant may not stop or even delay a taper, it adds momentum to interest rates edging lower.

Retail sales slip, weakening inflation argument. Yet another set of economic data chipped away at fears of runaway inflation. Shoppers cut back their purchases in July even more than expected as worries over the delta variant dampened activity and government help dried up. Retail sales for the month fell 1.1%, worse than estimates of a 0.3% decline. Most of the decline came from motor vehicles and parts dealers, which fell 3.9%. Clothing stores saw a 2.6% decline, and sporting goods, musical instrument and bookstores fell 1.9%. Online sales also posted a 3.1% drop. Though July saw a month-over-month decline, the $617.7 billion in sales still represented a 15.8% acceleration from the same time a year ago – good news. All told, retail sales registered below its April 2021 peak for the third straight month. In this context, it easy to see why the wind has left the sails of economic optimism.

Our take: Want to know where the economy is headed? Watch the always important US consumer. The weakness in retail sales indicates that consumers – who single handedly account for more than 70% of America’s economic activity – are growing more price conscious as inflation picks up. The data further show that spending is drifting away from purchases of goods and toward purchases of services, a dynamic that inspires hope of continued economic recovery, however, at a slower pace. Looking further out, the spread of the delta variant could curb demand for services like travel and entertainment. Higher prices for things like groceries, meals out, personal care and apparel also risk limiting discretionary spending in the coming months. Taken together, the data implies weaker than expected Q3 economic growth, allowing the Fed another reason to slow-walk any tapering activity, and for interest rates to trade in their ranges.

Slowing factory momentum signals a bumpy recovery. The Philadelphia Fed factory gauge – a measure of regional manufacturing growth – unexpectedly fell to 19.4 in August (vs. 21.9 prior). Markets expected a reading of 23.1. Indicators of current and future activity slipped back, suggesting the national-level ISM survey, the broadly watched factory activity gauge, may also edge lower in coming months.

Our take: How the production side of the economy keeps up with demand is crucial to America’s growth outlook. While the broad consensus is that America’s factories are inching closer to meeting demand, it seems they are doing so at both a snail’s pace and unevenly from a geographic perspective. Looking ahead, the spread of the delta variant risks exacerbating supply-chain disruptions. It’s yet another signal that the Fed can remain patient in easing off the stimulus throttle in the coming months and adds weight to long-term interest rates remaining in their ranges – or even falling lower –  in the coming weeks.

Economic growth slows in China – should you care? Yes, you should. China entered the pandemic before any other developed economy and was also the first to emerge from it. As such, China’s emergence from the pandemic offers the world a preview of how things could play out economically.

China’s factory output and retail sales growth slowed sharply and missed expectations in July as new Covid outbreaks and floods disrupted business operations. Industrial production in the world’s second-largest economy increased 6.4% year on year in July, a performance that contrasted with expectations of a 7.8% rise in output after growing 8.3% in June. Retail sales increased 8.5% in July from a year ago, far lower than the forecast 11.5% rise and June’s 12.1% uptick. China’s economy rebounded to pre-pandemic growth levels but has since lost steam as businesses grappled with higher costs and supply bottlenecks. New COVID-19 infections in July also led to fresh restrictions, disrupting the country’s factory output. Sound familiar? The big fear is that China could export its inflation – since it still holds the title as the world’s export powerhouse – to us here in the US of A. Time will tell.

What to Watch This Week: It’s all about the Fed’s gathering in Jackson Hole. If you’re not familiar with it, the annual Jackson Hole Economic Symposium, held in Wyoming, focuses on important economic issues faced by the world’s economies. Participants include the world’s prominent central bankers, academic luminaries, and leading financial market players. Just so you know, with the Delta variant raging in Wyoming, the event is virtual this year.

While the event is always closely watched by markets and heavily covered by the financial media, this year’s gathering takes on special significance given the global economic turmoil triggered by the pandemic. Fed Chair Powell will be the most-watched attendee, as he’s expected to continue to guide markets down the taper path during the gathering by dripping tidbits of commentary aimed at eliminating any communication missteps.

Despite the attention the symposium will garner this week, we believe that clearer signals on the Fed’s tapering plans will come at its September 22nd policy meeting, followed by a formal announcement in November that reductions in its asset purchases – aka “tapering” –  will begin in December or January. As such, the September policy meeting, and August’s jobs report, set for release on September 3rd, are the key near-term events that could jolt interest rates out of their range-bound slumber.

With likely a few months to go before the Fed begins formally pulling back on the stimulus throttle, and with the communication of the Fed’s taper plans likely to be a slow but steady drip in the meantime, any surprises will come from economic data. On that front, July personal income and spending (Friday) will need to show a strong advance in services to keep Q3 growth expectations from slipping. The softer-than-expected July retail sales report and signs the delta variant dented dining-out in August are clear negatives. An upward revision to Q2 GDP (Thursday) could allow the Fed to view the economic recovery as broadly intact, especially amid still-high inflation readings.

Big Picture: As we approach Q4, debate is ramping up about where the 10-year Treasury yield will end up at year end. Looking back at our rate forecasts at the beginning of 2021, we believed that the 10-year would be somewhere near 1.75% at 2021’s close. While a lot has happened over the course of the year, it looks like, after the Fed announces its taper plans, our forecast may not be too far off.

If current consensus economic forecasts are realized, and the Fed begins to reduce asset purchases later this year, easing off the stimulus throttle at an increasing pace, the 10-year should climb modestly to about 1.50% by year-end.  The widely held view that America may have already passed peak economic growth for the year only strengthens our case. Should that come to pass, the yield curve would steepen, as corporate credit growth, housing and interest-rate sensitive sectors could absorb the Fed’s “dovish” taper – in which the Fed commits to keep short-term interest rates low for longer than markets currently anticipate, even as inflation remains relatively high. 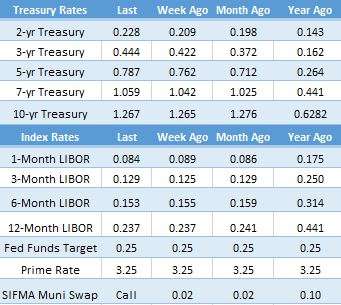 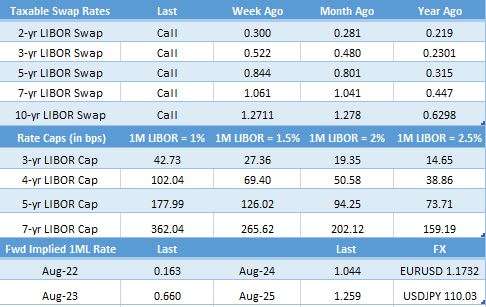 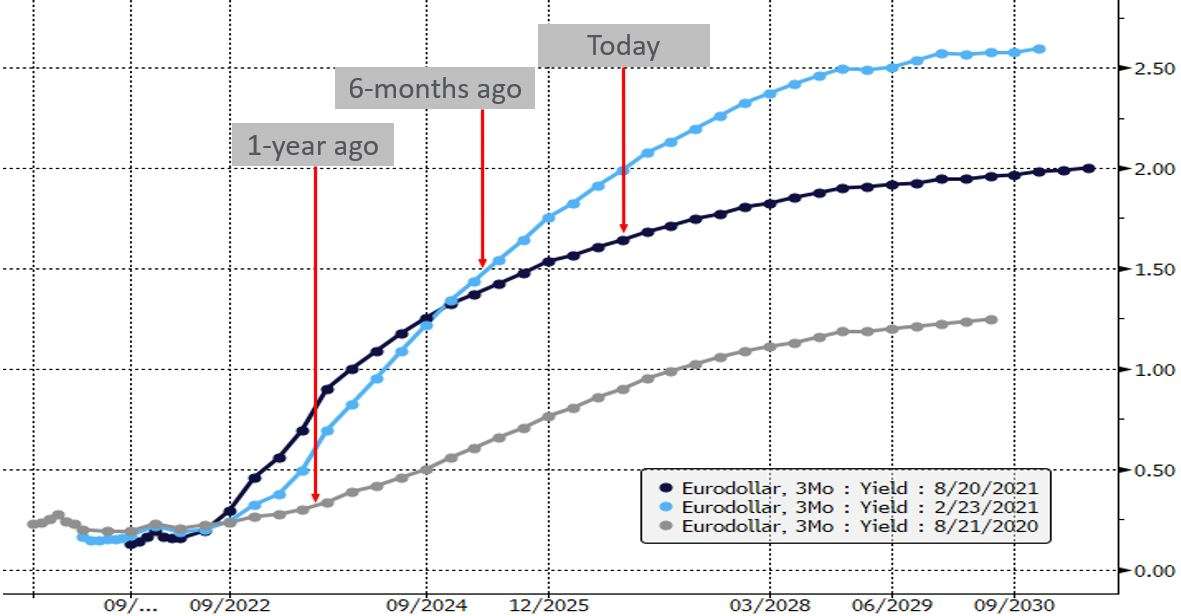 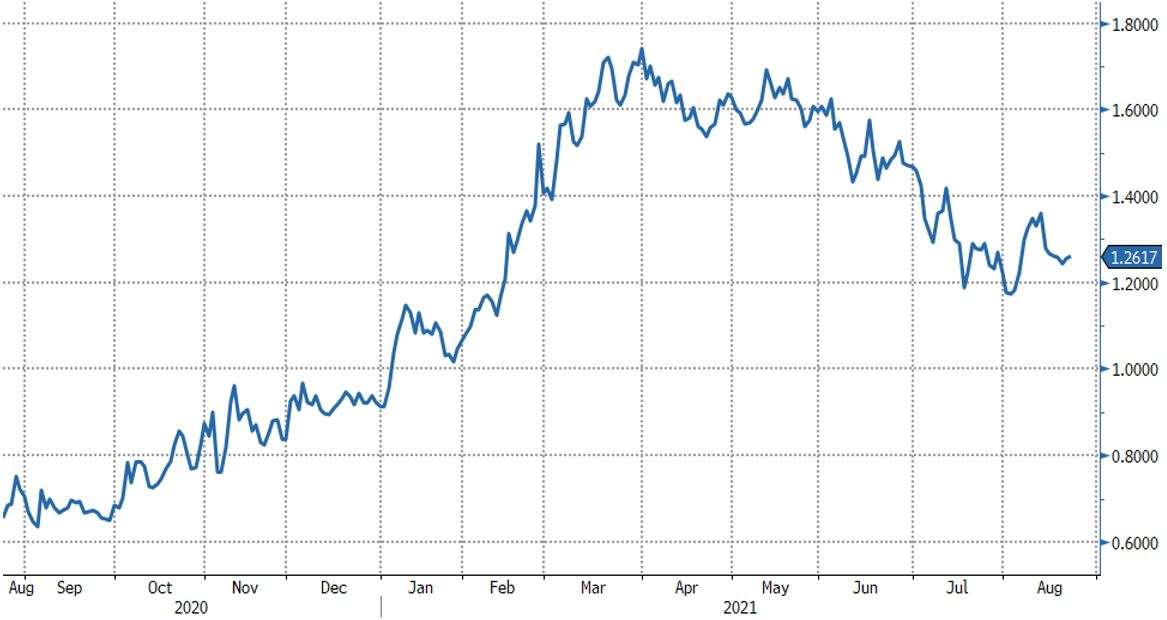 Don’t Fear The Taper
We use cookies to give you the best web experience. If you continue to use this site it is deemed you consent to this site's use of cookies.OkPrivacy policy
Scroll to top