Last Week: Aided in part by a very strong US employment report, both interest rates and equities edged higher, recovering from trade war related lows early in the week. The US 10-year Treasury note rose by eight basis points to 1.85% while 1-month LIBOR followed suit, climbing by two basis points to 1.72%. Crude oil rose $1.50 to $58.75 amid discussion of OPEC production cuts, while the US Dollar weakened, and Gold traded flat. Treasury yield volatility, a major driver of the cost of rate caps and the movement of swap rates, rose to 4.54 from 4.34 this time last week.

America’s job creation engine is humming. The US economy added 266K jobs in November, blowing out consensus forecasts of 180K. Even better, the prior two months data were revised up by an additional 41k. Even though the numbers were inflated by about 46k due to the return of striking GM workers to the workforce, new jobs in the manufacturing sector were a bright spot. The unemployment rate fell back to 3.5%, matching its 50-year low, while average hourly earnings expanded 3.1% annualized last month. After revisions, the average pace of job gains in the last three months was 205k compared to 245k in January. Our take: strong hiring momentum suggests the US economy is weathering the impact of the ongoing US-China trade war, and the unemployment rate will continue to grind lower. Tepid average hourly earnings growth signals that despite low unemployment, labor scarcity is not causing excessive wage-pressures. All told, the solid labor market and sustained economic expansion mean the Fed will stay on hold, and markets will push any bets of a rate hike or cut out to mid-2020.

Amid the good news on jobs, a weak reading on US manufacturing was the outlier. Purchasing managers’ indices continued to tick higher in most countries in November, though America’s closely watched Institute for Supply Management Index was unexpected, falling to 48.1 from 48.3, well below forecasts. The worse-than-expected data were jarring given upbeat rhetoric on the US-China trade war front over the last month and suggest that companies retain low expectations for a positive outcome.

OPEC mulled deeper oil production cuts. In an effort to support oil prices, members of the Organization of Petroleum Exporting Countries are contemplating trimming crude oil production by a further 400k barrels per day, augmenting the 1.2-million-barrel output curb put in place in 2017, and raising the prospect of higher oil prices in the near future. Why you should care: there is a strong, long-term positive correlation between 10-year Treasury yields and crude oil prices. Specifically, the correlation between 10-year “break-evens” – the inflation expectation component of interest rates – and the price of crude oil. Any sustained rise in oil prices will serve to slowly erode the anchor holding Treasury yields within recent ranges. Have you ever wondered why we put oil prices in the first paragraph of this newsletter every week? Now you know. Ignore the goings-on in oil at your peril.

Another week of suspense filled trade headlines – with little substance. If you believe the news media, US-China trade talks are slowly but surely edging toward an interim agreement amid many fits and starts. Several new fronts opened last week. On Monday, President Trump announced the re-imposition of aluminum and steel tariffs on Brazil and Argentina in retaliation for pronounced weakness in the two Latin American countries’ currencies. Trump said the recent currency devaluations were negatively impacting US farmers. Trump also proposed levies of up to 100% on $2.4 billion worth of French luxury goods exports to the US in retaliation for France’s new 3% digital services tax, which targets mainly US tech giants. Meanwhile, Chinese officials say that the US and China remain in close contact over trade and that there is “no need to panic” over US legislation targeting China’s human rights record. Our take: it feels like we’ve explored the issue ad nauseum (literally) throughout the course of the year, and we’re not sure how much there is to add. We believe the US and China are still miles apart, and any near-term “phase-one” trade deal will lack substance. Regardless, the looming December 15th deadline on the imposition of new tariffs on China by the President will keep things interesting in the next week. This means that the path of interest rates in the coming days is likely rangebound or slightly higher.

What to Watch This Week: The key event this week is Wednesday’s Fed meeting with the release of the official statement and Summary of Economic Projections at 2:00PM ET, followed by Chair Powell’s press conference at 2:30 PM. Outside of the Fed, both a rate decision from the European Central Bank and a U.K. election could have BREXIT implications, and thus will garner the market’s attention.
Pretty much everyone is confident that the Fed: 1) will remain on hold at this week’s meeting, 2) not signal strong inclinations toward action over the medium term, and 3) is resolved with a high hurdle to adjust the current stance of interest rates. As such, the focus on the week’s data docket will drift toward Friday’s November retail sales report and to a lesser extent toward the November consumer price index data on Wednesday.
For retail sales, consumers have exhibited a lackluster pace of activity thus far this quarter, thus the mid-month retail data will yield important clues on how well the holiday shopping season is shaping up, and whether current quarter GDP has a chance of topping 2%. For consumer prices, they haven’t risen markedly, cementing the current state of inflation as a non-issue. Both imply the Fed’s current “on hold” stance will remain well into 2020.
Of course, all eyes and ears will be listening for any progress on the US-China trade front, as the issue remains the big catalyst for a significant move higher in yields as the December 15th tariff deadline approaches. Markets will be watching and listening intently for any credible signal that the US will forgo the additional tariffs it’s threatening to impose on Chinese goods. If it happens, rates will rise appreciably as a result.

Take-Away: While America’s growth pace is likely decelerating into year-end, and the US-China trade war lingers on, the resilient jobs market suggests that any real downside risks to the economy are few and far between. In short, growth is cooling, but not collapsing.
The word “Goldilocks” gets thrown around a lot – possibly too much – but it’s hard not to look at Friday’s jobs number and ask if this is as good as it gets? Strong job growth, low unemployment, and moderate wage pressure create an ideal scenario for corporate America and speak to the idea that the economic cycle may not be as mature as many of us seem to think it is. On the other hand, a cynic might point to some of the lagging economic indicators – like manufacturing – and suggest that the blowout jobs number paints an excessively flattering portrait of the state of play.
Regardless, that’s a story for next year. For now, with this week’s Fed meeting being largely a non-event, the big catalyst for risk appetite and significantly higher yields in one of the last actively traded weeks of the year would be a credible signal that President Trump will forgo the additional tariffs he’s threatened to impose on Chinese goods on Dec. 15th. Will he, or won’t he? It’s anyone guess. Until then, rates will continue to sit on a precipice, ready to break – perhaps violently – in either direction once the news breaks. 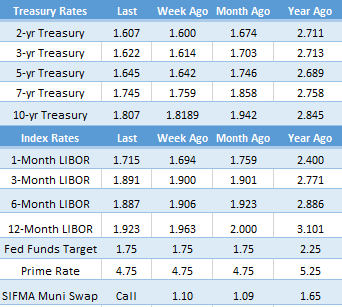 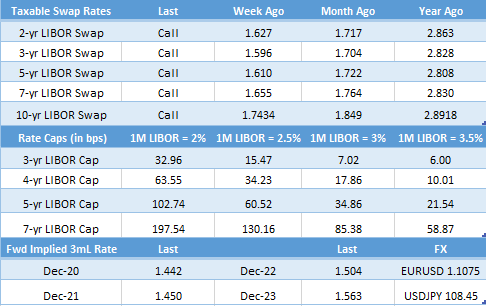 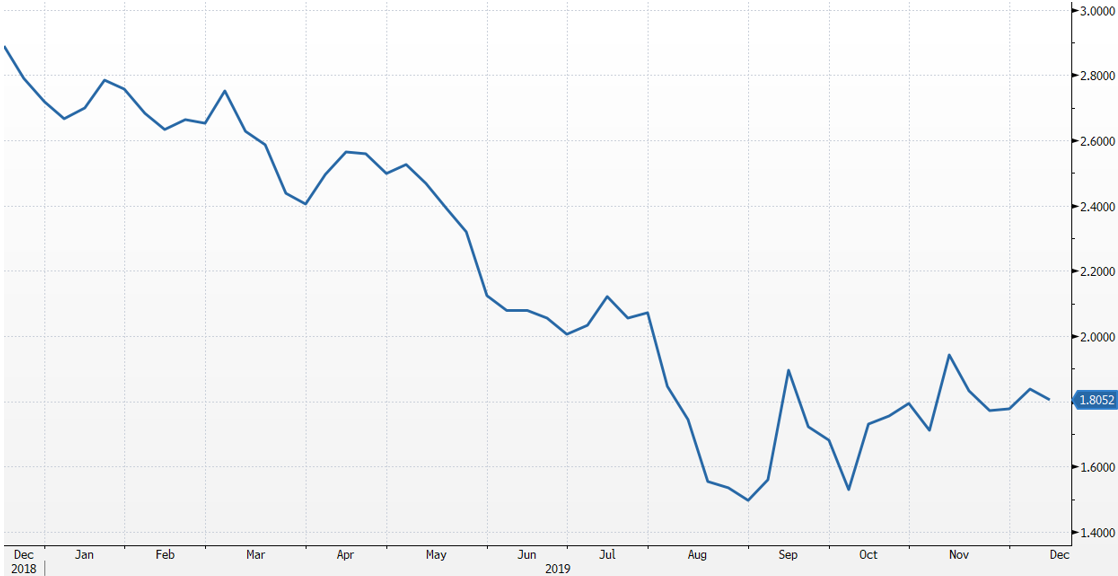 Curb Your Enthusiasm
Scroll to top