Last Week: Interest rates were mixed as equities declined modestly. The yield on the US 10-year Treasury note traded slightly lower to 2.95%, slightly off the 2.97% seen a week ago and well below the 3% seen mid-week. The temporary move higher represented the fourth time we have breached the 3% threshold over the past seven years. Elsewhere, 1-month LIBOR also retreated off its 2.082% high to settle in at 2.079% at week’s end. Oil declined almost $1 to trade at $68.75, the US Dollar strengthened, and Gold weakened. Treasury market volatility, as measured by the Chicago Board Options Exchange Treasury Note Volatility Index (TYVIX), fell to 3.69 from 3.97 a week ago.

US employment growth slows, but strong revisions cushion the blow. Non-farm payrolls rose 157,000 in July, below expectations of a 190,000 advance. Upward revisions to the May and June data added a net 59,000 jobs to the tally, however, more than offsetting July’s shortfall. The unemployment rate dipped to 3.9% from 4.0% in June while average hourly earnings (aka wages) rose only 0.3% month over month and 2.7% from a year ago. Over the last three months, US payrolls expanded by an average of 224,000 new jobs per month. While growth in consumers’ wages is still muted and the report was slightly disappointing overall, the data cemented expectations for a 0.25% Fed hike next month.

Fed left rates unchanged while upgrading its economic view. Every word in the Fed’s official post-meeting statements is parsed and debated, and the statement from last Wednesday’s policy meeting was no exception. The Fed characterized the US economy as “strong” rather than “solid”, as it was previously described, painting a clear picture that we’ll likely see two more hikes this year despite the uncertainty over trade policy and criticism from President Donald Trump. For some perspective, the only time since 2000 that the Fed has described economic growth as “strong” in its policy statement was in May 2006, just after US GDP posted a 5.4% annualized increase.

Trump administration considered raising proposed tariff rates as China retaliated. The trade spat is in full swing as the White House announced that it’s considering raising the tariff rate on $200 billion in proposed levies on Chinese exports to 25% from the previously contemplated 10% rate. China fired back, saying it will levy tariffs on $60 billion of US products if the administration moves ahead with its plan. While China talks tough, a steady stream of actions show that the tariffs are beginning to bite the Chinese economy. Most recently, China surprised currency markets by re-imposing measures that make it costlier to short its currency, a move seen to avoid the bigger stick of FX intervention or rate hikes at a time Chinese policymakers are delicately deleveraging the economy. Our view overall? China will eventually cave.

Americans are saving more than previously thought. As part of recent revisions to US GDP data, earlier estimates of the US savings rate were revised substantially higher. Americans saved at an average rate of 6.7%, the updated data show, compared with an earlier 4.2% estimate. The upward revision was the largest on record and eased fears that consumers may need to limit future spending to replenish what the prior data had shown as depleted coffers.

What to Watch This Week: Following last week’s Fed meeting and the always-important jobs report, it’s a bit of a quiet one this week. However, markets have been on edge for weeks in anticipation of any economic data releases that show the first signs of deterioration due to the trade war, and we just may finally see it this week in the release of producer and consumer price data (PPI & CPI), set for release on Thursday and Friday respectively.

Specifically, regarding the consumer price data, as we have said ad nauseum, until average hourly earnings growth (aka wage growth) reaches 3.0% (well above the current 1.7%), the Fed won’t contemplate speeding up its current gradual pace of rate hikes.

Take-Away: Data on producer and consumer inflation for July will be scoured for any signs of increase due to rising import prices due to tariffs. With Q2 GDP at 4.1%, and other recent indicators showing strong growth percolating in Q3, inflation in producer and consumer prices looks to be firming in the months ahead, promoting some to increase the probability of a hike in December. The fly in the chardonnay? The evidence of softer wages in last Friday’s jobs report, which offsets any inflation spike, and erodes the need for the Fed to hike any sooner or greater than the “two more this year and three in 2019” currently expected. 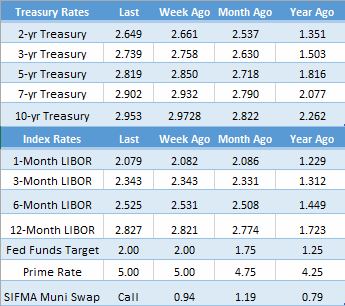 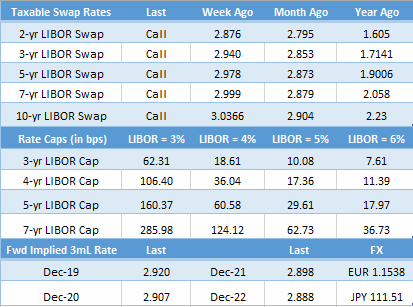