What You Missed: Long term interest rates rose, while equities declined for the week as inflation jitters spurred the queasy to the sidelines. The yield on the benchmark US 10-year Treasury note closed near 1.64% after rising as high as 1.69% mid-week, as rising commodity prices and labor shortages fueled fears that near-term price spikes could translate into longer-term inflation, and eventually, higher long-term interest rates. Short-term rates, like 1-month LIBOR and overnight SOFR, continued to bounce off all-time lows. The price of a barrel of West Texas Intermediate crude oil rose to $65.08 following a cyberattack on a major US pipeline, while the US Dollar weakened, and Gold strengthened. Treasury yield volatility, a key driver of the cost of rate caps and swaptions, wrapped the week lower than where it started after spiking mid-week on heightened inflation fears.

Rising prices and weak jobs put inflation fears front and center – are they justified? Several important economic gauges are showing that some semblance of inflation has indeed arrived, the question for interest rates – which normally rise in an inflationary environment – is if the inflation spike will last, for how long, and when rates will rise in response.

For some detail, here’s a quick glimpse of just a couple of the hits that seemingly just kept coming last week: 1) The Consumer Price Index, which measures the price of a basket of goods as well as energy and housing costs, rose 4.2% from a year ago, compared with an estimate of a 3.6% increase. 2) The Producer Price Index, which measures costs from the viewpoint of industries that make physical products, rose 0.6% last month (0.3% expected) and 6.2% for the last 12 months (only 3.8% was expected), marking the largest increase since the US Bureau of Labor Statistics started tracking the data in 2010. This followed a major let down in the first week of May, when it was reported that America’s job engine added only 266,000 jobs last month, about a quarter of the gain expected, and job openings hit a record 8.1 million at the end of March.

Our take: The unexpected outcomes in economic data in recent weeks, including disappointing job gains, surging inflation, and a spike in consumer inflation expectations, highlight the unique nature of an economy recovering from a pandemic. While signals pointing to a jolt in inflation – and an increased probability of higher interest rates that would normally follow – are alarming, they aren’t as horrific as the financial media makes them out to be.

Let’s take a deeper look into the Consumer Price Index (CPI) data, probably the most important inflation gauge for interest rates, to prove it. Given that consumer spending activity makes up roughly 70% of US economic activity, the importance of this gauge can’t be discounted. However, note that 60% of the March to April increase came from five components – used cars, rental cars, lodging, airfares, and food away from home. These component price gains likely won’t have staying power, and certainly aren’t staple items consumers need routinely for their sustenance.

As supply shortages run up against aftershocks from fiscal stimulus, and the base for year over year comparisons remains low, the CPI gauge will continue to run hot into the summer, but will likely fade thereafter after ,most of us finally emerge from our Covid hidey-holes. We believe that as turbo-charged unemployment benefits expire and more school districts reopen, an increasing number of individuals will choose to re-enter the work force, giving the economy many more hands to help meet the surge in demand, eventually making most price spikes temporary.

One possible fly in the chardonnay in this theory? If inflation expectations become significantly detached from reality, overflowing into the pricing of credit and the like, prompting the Fed to react.  However, if inflation fears and temporary price increases merely prompt consumers to take a wait-and-see approach to buying homes and cars amid the current frenzy, it would blunt the pace of demand recovery, and would over time lend credence to, not detract from, the Fed’s steady-as-she-goes approach.

Retail sales paused in April. Our view is further supported by the lackluster reading of retail sales in April, which stalled following a sharp advance in the prior month when pandemic-relief checks provided millions of Americans with increased spending power. The value of overall retail purchases were essentially unchanged last month following an upwardly revised 10.7% gain in March that was the second-largest on record back to 1992. While 1-month’s worth of data certainly doesn’t make a trend, we expect that savings-heavy consumers will shift more of their spending to services such as entertainment and travel as infection fears fade in the months ahead, underpinning retail demand.

Bottom line on the inflation debate: The Fed has signaled that it views price pressures as temporary and is determined to look through them. Despite the surprise high in April’s CPI, the Fed won’t shift its stance until we see a multi-month stream of data pointing to spiking inflation, and a huge, positive turn around in the jobs picture, both of which will take many months to materialize. Bond markets are backing the Fed up: once the dust settled, the 10-year Treasury barely moved last week despite what the financial media repeatedly portrayed as “shocking” inflation data, which would normally elicit a jump in long term rates. It just didn’t happen. Keep in mind that the financial news media’s goal is to sell the news; be wary of news headlines attempts to whipsaw your views.

What to Watch This Week: The light data and event calendar in the week ahead will shed light on whether supply shortage issues are persisting into May (Monday) and whether producers will continue passing input-cost increases onto consumers this summer (Friday).  We’ll be scouring the data for clues that factories expect to see looser supply constraints later in the year, which will directly translate into the degree, and duration, of upward price pressures this summer. Elsewhere, housing data for April (Wednesday) will reflect inventory scarcity creating demand for new construction.

The minutes from last month’s Fed monetary policy meeting will be released (also Wednesday) but given that the latest data shocks appeared after the meeting, the minutes won’t be helpful in providing insight into the Fed’s official reaction, nor shed light on any potential policy changes. The dynamic will elevate the importance of the Atlanta Fed’s 2021 Financial Markets Conference, held on Monday and Tuesday, which provides Fed officials an opportunity to clarify its view on last week’s inflation data.

Big Picture: While everyone else is focused on what supply shortages means for inflation, we’re just as interested in what higher prices for a good part of 2021 mean for economic growth. It’s true that if the cost of some desirable purchases is just too high for consumers – like housing – that they’ll simply hold off for a time when prices are lower. As the delay filters through the economy, it may cause some to bring down their growth estimates for the year, and long-term interest rate forecasts with them.

If slower than the expected gangbusters growth is a true possibility, and you’re considering new fixed or floating rate financing, it may be a good idea to take a second look at floating. Short-term rates may remain anchored near zero, allowing some borrowers an opportunity to create a tailwind behind their IRR. 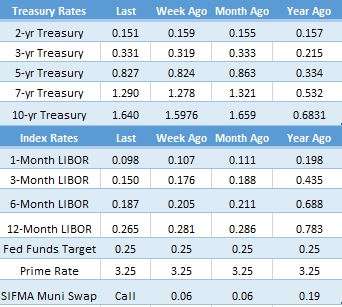 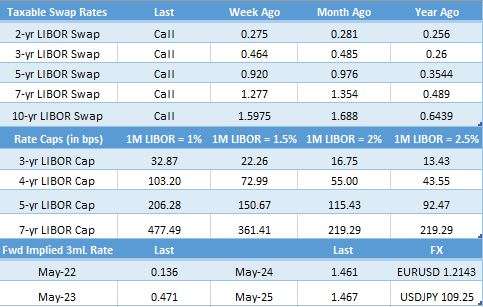 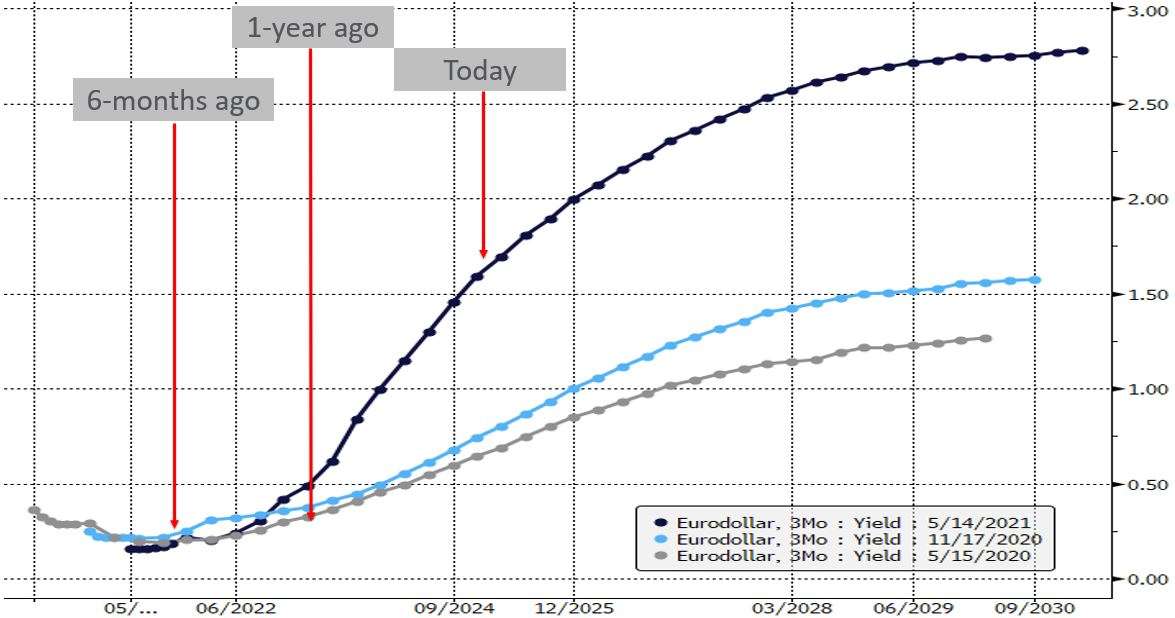 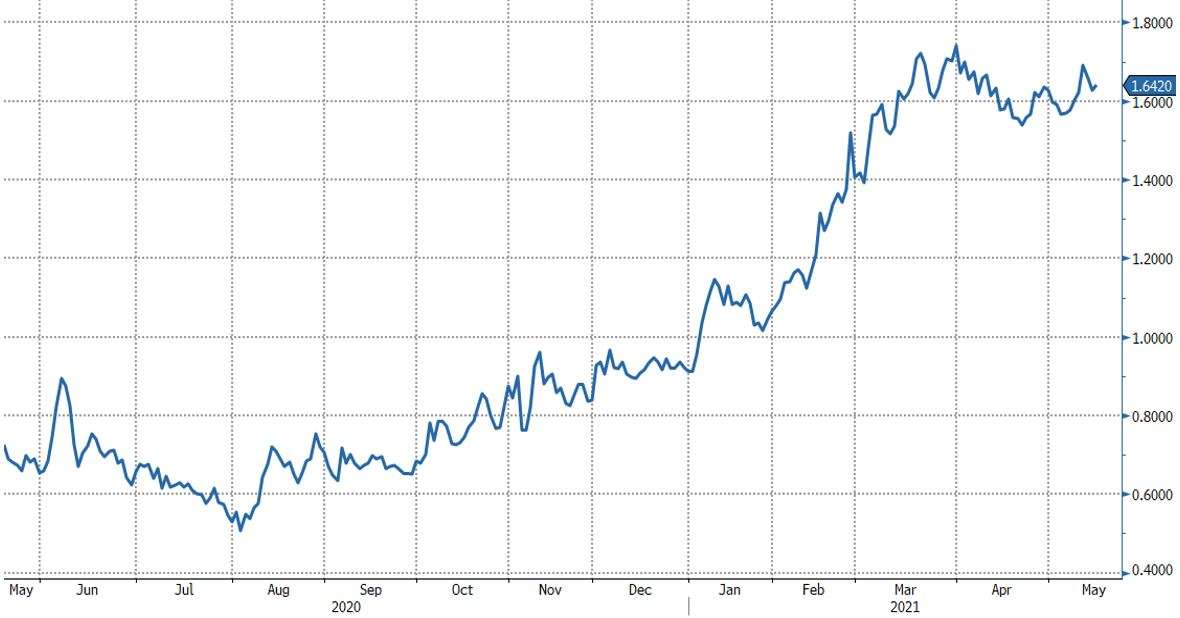