Last Week: Global equities and interest rates recorded solid increases last week, as major US indices set fresh records and European stocks posted their best week since February. Oil prices slid slightly, Gold weakened while the US Dollar strengthened to highs not seen since 2003. The yield on the 10-year US Treasury note increased 8 basis points week over week to 2.4675 – 55 basis points higher than it was on Election Day November 8 – while 1-month LIBOR extended its recent streak to trade to .6800, an eight-year high.

This Week: We’re staring down the barrel of one of the heaviest weeks for tier-1 economic data and events in a while. Gauges on retail sales, industrial production, the consumer price index, and Wednesday’s Fed meeting await, and that’s pretty much it for the rest of the year. We’re expecting a theme of moderation to pervade throughout, as all gauges either maintain or back-off their recent highs while the Fed works hard to avoid surprises. As such, despite the data deluge, we’ll likely see a boring week with few surprises, but a beautiful one as all or most economic gauges paint a picture of continued US economic expansion.

Although every Tier-1 economic gauge is important, the market’s recent focus on the consumer, wages and inflation – and how this will affect Fed policy –  is causing us to anticipate Thursday’s release of November’s Consumer Price Index in particular. This week and over the next few months, we’ll be watching for signs of labor costs putting greater pressure on the prices for services, as they’ve been accelerating over the last year and have increasing potential, among other things, to spur the Fed to employ more frequent hikes next year.

Take Away: There is little doubt the Fed will hike this week by 0.25%. It’s a done deal. What markets will be watching for is how the Fed will clarify expectations for hikes in the future, a feat more complicated than usual due to:

While the Fed has deemed the US economy finally ready to shoulder another rate hike, they’ll temper their enthusiasm to avoid any disproportionate market speculation that we’ll see a faster pace of rate hikes next year. The market’s median estimate Fed funds rate a year from now is 1.1%, currently implying two 0.25% hikes next year, but the details of this week’s Fed meeting could easily change that. 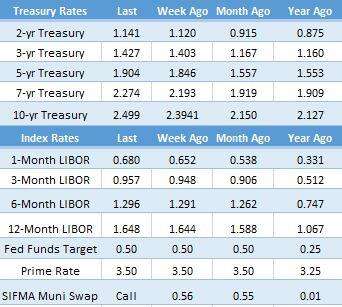 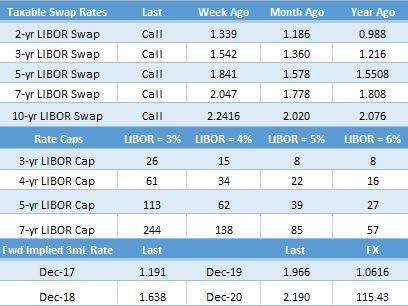 LIBOR Expectations (where the market expects 3-month LIBOR to be in the future): 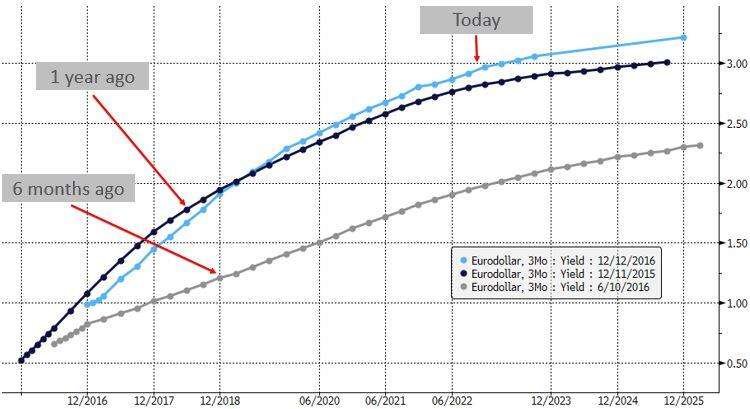