Last Week: Rates continued their march higher across the curve while global equities rose on continued hopes that looser US fiscal policy will quicken the pace of global economic growth. Oil rose to $45.30 from $43.90 a week ago. Gold fell while the US Dollar rose at its fastest pace in nearly a decade, to one-year highs. Yields on the 10-year US Treasury note rose to 2.29% from 2.14% last week, while 1-month LIBOR rose to .5660% from .5501%, on an expanding belief that the economy is approaching full employment and any Trump-driven fiscal stimulus could prove inflationary.

In a scheduled testimony to Congress, Fed Chair Yellen told the Joint Economic Committee that the economy is making very good progress and that a hike in interest rates could come “relatively soon.”  While Yellen made mention that the results of the US presidential election have not altered the Fed’s assessment, markets have fully priced in a 25-basis point hike at the December 14th Fed meeting.

This Week: As we’ve said in the past, it will be up to the American consumer, not businesses, to ensure that the US economy finishes 2016 strong, and is set up well for next year. As such, the focus of markets this week will be on the first reads of consumer attitudes following the election.

After last week’s encouraging retail sales data, this Wednesday’s release of November consumer sentiment could be tilted toward to downside since Hillary Clinton won the popular vote, implying that most voters are disappointed. This week’s read will be the first clue into whether this disappointment manifests in a souring of consumer’s attitudes toward spending. Why does this matter? Impaired consumer attitudes could spell trouble for the direction of consumer spending, a critical driver of America’s near-term economic growth and a huge influence on what the Fed will do in early 2017. If we see a negative surprise in the data over it’s recent trend, we expect that it will be short-lived as current capital market optimism serves as a counter balance.

Other data on new and existing home sales, durable goods purchases, and the release of the minutes of the Fed’s last meeting aren’t expected to move markets in any meaningful way, especially since the initial market reaction to Trump’s surprise election victory removed a major unanswered question of what the Fed will do in December.

Take-Away: As we said last week, the election results have achieved – at least for now – a goal that has eluded the Federal Reserve for years: a sharp increase in growth and inflation expectations. That being said, Fed Chair Yellen warned markets last week not to get ahead of themselves, reiterating that an acceleration in growth and inflation is not guaranteed, and that rising interest rates will eventually weigh on expectations of higher economic growth. If any real semblance of Trumponomics pro-business, pro-energy, tax-repatriation policies become a reality, they’ll drive markets higher for a few years, until inflation kicks in and the Fed begins to hike interest rates aggressively. In other words, we’ll get a strong stock market and higher yields until another Fed induced, credit-driven bear market emerges.

In the interim, we’re watching markets closely to see if the current growth/inflation euphoria lasts into the weeks ahead, and how Trump’s cabinet and policy detail gel – all critical pieces to a continuation of the higher yields we’ve seen of late. 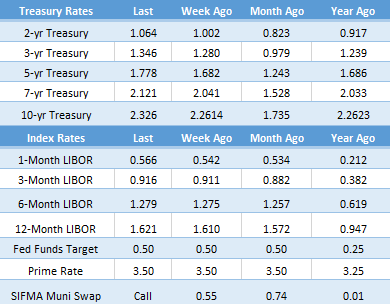 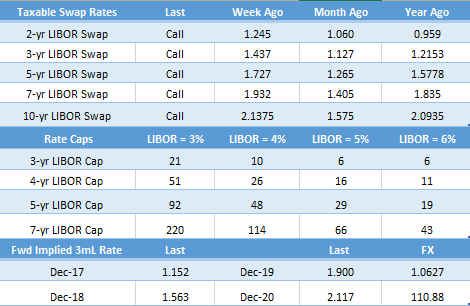 LIBOR Futures (where LIBOR is expected to be in the future): 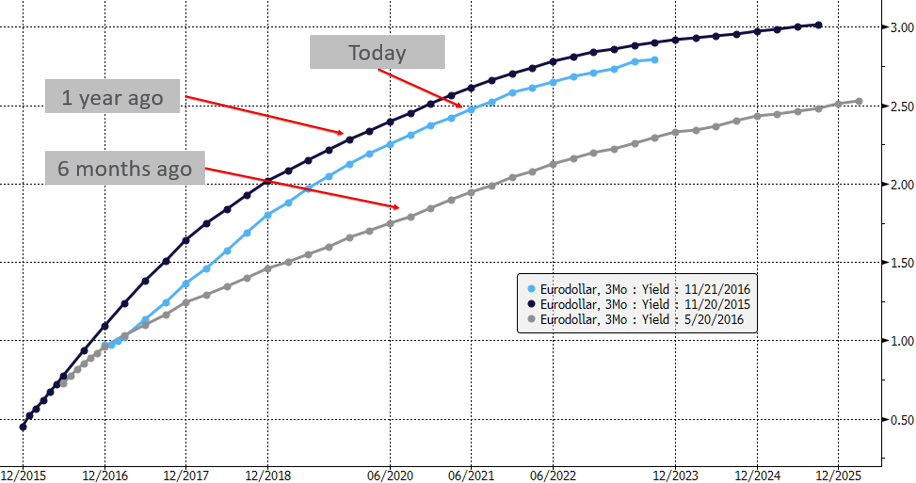