Last Week: Interest rates were mixed as equities were modestly lower on the week, having recovered some of the sharp losses recorded early in the week. The yield on the 10-year US Treasury note extended its decline to 1.70%, down from 1.86% a week ago, to its lowest level since 2016. The move was also the largest one-week drop in the 10-year yield since September 2011. 1-month LIBOR touched a one-year low near 2.19%. Bond yields in Europe fell to record lows while yields in the UK fell below the levels posted in the immediate aftermath of the Brexit vote in 2016. Oil declined $1.50 on the week, to $54.25, while the US Dollar weakened, and Gold strengthened. Treasury yield volatility fell to 5.18 after hitting a three-month high of 5.74 early in the week.

Currency moves take the spotlight amid flare in trade tensions. In what was widely seen as means to offset some of the drag on China’s economy caused by a fresh round of US tariffs, China allowed its currency, the yuan, to weaken past 7 yuan per dollar for the first time since 2008’s global financial crisis. The move sparked heavy selling in global equity markets early in the week, though efforts to moderate the currency’s fall helped stabilize markets by week’s end. A weaker Chinese currency makes Chinese goods more affordable to foreign consumers. The dark side of currency manipulations like China’s is the risk that it will spark capital outflows from the country, and a broad destabilization of financial markets. In response, the US Treasury branded China a currency manipulator, which sets off a year-long process of negotiations involving the International Monetary Fund. All told, the tit-for-tat downward spiral in US-China trade negotiations should tell you two things: 1) The squabble will be a lingering issue for many months to come, and could even last beyond the 2020 Presidential election, and 2) Rates look set to be lower for longer, as the ever-escalating trade issue cements uncertainty into markets which will serve as a drag on rates moving notably higher anytime soon.

Former Fed chairs promoted Fed independence. In a surprising step, former Fed Chairs Alan Greenspan, Ben Bernanke and Janet Yellen (remember them?) wrote a Wall Street Journal op-ed stating that they’re united in the conviction that the Fed must act independently and in the best interests of the country. Further, they said that Fed policymakers need to be free of short-term political pressure and should be allowed to do their jobs without the threat of removal or demotion for political reasons. The former officials also said that short term moves called for by politicians, especially around elections, has led to economic calamities. We agree and can’t stress enough how much the world’s financial system is predicated on an independent Fed; any move to the contrary is ultimately corrosive. You can read the piece here (note paywall): America Needs an Independent Fed

Central banks around the world solidify their lean toward lower interest rates. Several Asian central banks cut interest rates last week. The Reserve Bank of New Zealand cut the most aggressively, dropping its official cash rate by 0.50%. The Reserve Bank of India cut its repo rate 0.35%, to 5.40%, while the Bank of Thailand and the Central Bank of Philippines each cut rates by a quarter-point. The moves come amid the aftermath of last week’s Fed rate cut and the intensifying US-China trade clash.

What to Watch This Week: While the week’s economic releases are always important for the movement of interest rates, the seemingly ever- escalating trade dispute has made tier-1 economic data releases all but obsolete of late; markets are scrambling just to keep up with the news flow and interpret just how it will impact plummeting Treasury yields.

On tap for the week ahead are key gauges on US inflation (Tuesday, expected to be weak) and retail sales (Thursday, expected to be strong); data that normally have market-moving potential.  However, after China’s surprise currency gymnastics and increasingly frozen US-China trade relations pushing 10-year yields to the lowest level since 2016, economic data releases will likely take a backseat to any trade developments should they occur. For now, markets expect about 0.50% of additional Fed cuts this year; it’s highly unlikely economic data releases will change that view in the days ahead.

Besides the tier-1 economic data, we’ll be analyzing other, more forward-looking gauges for clues as to whether trade-driven economic anxiety is building to the point where it could jeopardize America’s generally positive growth outlook. Remembering that growth in Q3 and Q4 will be mostly dependent upon continued resilience of the individual consumer buying stuff and consuming services, those economic gauges corresponding to the period following President Trump’s tweets threatening additional tariffs – consumer sentiment, jobless claims for the first full week of the month, regional factory production surveys and homebuilder confidence – will be the most useful in determining where we’re headed in the near term.

All are set for release over the next couple of weeks. We’re expecting a mixed bag of results: weakening consumer confidence in the future and lagging factory production, but solid momentum overall which should keep a floor under interest rates in the very near term. Beyond that, we expect greater downside risks to the growth outlook from the trade war, as President Trump follows through on the threat to impose tariffs on all goods imported from China on Sept. 1. It’s a recipe for 0.50% in Fed cuts in the remainder of 2019, with the next 0.25% cut occurring at the next meeting on September 18th.

Take-Away: Last week’s fraying of US-China trade relations and the ensuing moves in Treasury yields should be spurring a question in your mind: If things get really bad, what will the Fed do?

The last time we saw Treasury yields move lower this quickly was September 2011. Back then, demand for Treasuries was high, thanks to concerns over the euro zone debt crisis. Constrained by its 0% lower bound, the Fed announced the $400 billion Operation Twist program that month. Remember that?

It’s different this time in that with Fed funds at 2.12%, the Fed has more room to maneuver, and thus will save unconventional measures of stimulating the economy until it has used all its interest-rate cutting ammo. In the meantime, the Fed completed the balance-sheet unwind in July and will likely reverse course, increasing its size again soon. However, beware the coming news headlines and market-hype of interpreting the Fed’s balance sheet moves as “Quantitative Easing 2.0”. Rather, it’s merely a mechanical adjustment, more like QE-lite at most, to ensure reserves stay ample and shouldn’t be confused with full blown additional quantitative easing. 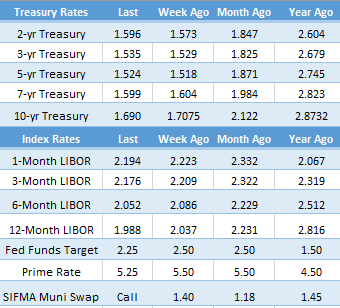 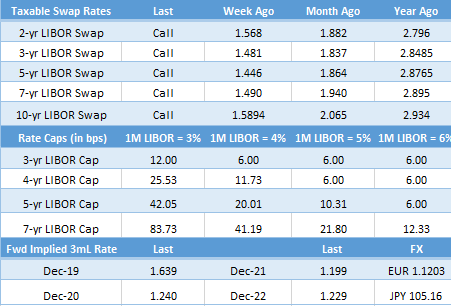 Meet Me at Zero
Scroll to top