Last Week:  The release of the minutes of the Fed’s July meeting showed officials of America’s central bank were divided over the urgency to raise interest rates again, with some preferring to wait because inflation remained benign and others wanting to hike soon on the back of the labor market’s near full employment.

By week’s end, interest rates slipped across the curve despite comments from two influential Fed officials staged a communication breakdown suggesting rates should go up sooner rather than later. Stocks traded flat while oil and gold rallied. the 10-year Treasury traded 6bps higher to 1.5776, while 1-month LIBOR traded 14bps higher to .5210.

This Week: Federal Reserve Chair Yellen’s speech at the annual Jackson Hole policy conference will dominate the agenda this week. She will use the venue to manage rate hike expectations ahead of September’s meeting, prepare the markets for a possible hike in December while defending the possibility of multiple hikes in 2017, all on the back of rising wage pressures and full employment.

We will be listening intently for any mention of new approaches to monetary policy in a low-interest rate environment.

On the data front, the calendar is modest at best, with national business, service and manufacturing sector surveys, gauges on existing home sales on tap the first half of the week. Wednesday and later brings the juicy stuff, with August durable goods orders and a revision of Q2 GDP (expected to be revised down to 1% from 1.2%) on tap. None of the data is expected to move markets in any meaningful way.

Take-Away: The market is struggling to build a conclusive story of the Fed’s economic and monetary policy view.  While Chair Yellen has been chanting the steady drumbeat of “shallow and gradual” future Fed hikes for some time now, a couple of influential Fed members painted a much more hawkish picture last week, clouding an already murky picture of future rate hikes.

As such, Yellen’s Jackson Hole speech this week will be watched even closer than it would have been otherwise. Yellen will use the platform to manage expectations for rate hikes over the next six-months ahead of the Fed’s release of new economic forecasts in September. We expect Yellen will imply the possibility of only one rate hike this year from the previously anticipated four, as markets aren’t buying the Fed’s pronouncements of stronger economic growth and a resulting faster pace of rate hikes in the coming years given it’s long track record of hiking later and less than expected.

While the prospect of a September rate hike is remote, the idea that the Fed will deliver two hikes by year end is looking impossible. We will be listening for any sign that Yellen is succumbing to the market’s “no hike for the foreseeable future” view on the back of a new, less than robust Fed assessment that longer-run growth prospects have diminished.

The Fed is eager to begin a series of rate hikes, but is concerned it could be moving prematurely, and believes it has little room to back track if it hikes too much,  too soon with rates close to zero. Concerns about the prospects for global economic growth, sagging inflation expectations, and mixed readings on the U.S. economy will keep the Fed sidelined at least until December. 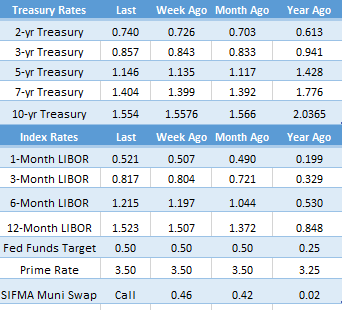 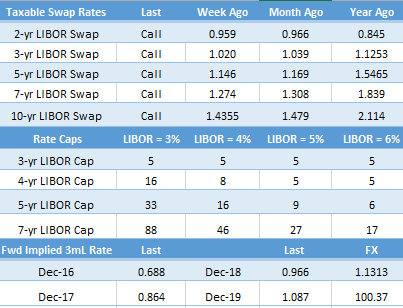