Last Week: Interest rates were mixed, and equities were modestly lower on the week as political turmoil and trade-related uncertainty gripped markets. The US 10-year Treasury note declined 9 basis points to 1.69%, as 1-month LIBOR rose 2 basis points to 2.03%. Oil declined $3.00 to $55.65 as most Saudi oil production came back online, while the US Dollar strengthened, and Gold weakened. Treasury yield volatility fell to 5.34 from 5.55 this time last week.

Official US-China talks are back on. Chinese negotiators will travel to Washington the week of October 7th to resume high-level trade talks. While many market participants – including us – expect a limited agreement on a discrete set of issues, President Trump continues to downplay such an outcome. Given that the US and China are miles apart on key issues, we’ll likely see the President postpone tariff increases scheduled to take effect in mid-October and in December in exchange for China committing to make significant purchases of US agricultural products. As signs of the trade war’s negative impact on US businesses build and the 2020 Presidential election approaches without any significant trade breakthrough, President Trump will face increasing pressure to make a series of “mini” trade deals to show some semblance of progress. From a broader perspective, the US-China trade war is unprecedented in size and scope in the postwar era. Not only does it dwarf previous conflicts in the amount of trade subject to tariffs, but the disagreements between the two sides are much broader. This suggests the current conflict will be very challenging to resolve and will linger for many months to come, helping to keep a lid on any sustained move higher in interest rates.

Impeachment drive having limited market impact – so far. Markets have taken the news in stride, mindful that removing the president from office requires a two-thirds majority of the Senate, meaning a significant number of Republican senators would have to vote for his conviction, which seems unlikely at this stage. Nevertheless, deepening political disfunction will keep US interest rates lower for longer.

Durable Goods data painted a blurry picture. Headline durable goods orders rose 0.2% in August while consensus estimates called for a decline of 1.1%. While it looks like consumer and business purchases of durable goods (think washing machines, refrigerators, airplanes and industrial machinery) were better than expected on the surface, the innards of the data suggest a continued softening in business’s intentions to spend on new capital projects through the end of 2019, restraining GDP growth. Yes, a tad boring, right? Well, remember that the Fed is all about the economic data, and investment, hiring, and business confidence remain key dashboard indicators for many at the Federal Reserve as they assess the need for more cuts this year. Ignore economic data at your peril.

Weak Consumer Confidence and Spending data rattle US economic growth prospects. As we’ve said for months now, markets and the Fed are looking to consumers to prop up growth amid a stall in business investment and a contraction in exports. If household demand appears to be faltering, growth prospects will deteriorate appreciably. As a result, news of a nine-point decline in consumer confidence in September is a sobering reminder that consumer resilience is not immune to trade tensions and slowing global growth. The data is an important signal that consumers may be poised to adjust toward a more cautious footing through the end of the year. However, even though consumer’s hopes for a brighter future are dimming, low unemployment, rising net worth and an elevated savings rate will provide a buffer against any sizable economic slowdown, adding weight to the likelihood of another 0.25% Fed rate cut in October and/or December.

What to Watch This Week: Your attention span will be tested in the days ahead, as impeachment proceedings, fears of a further rupture in the financial system’s plumbing, and progress on the US-China trade front all compete for your mindshare. Fixed-income traders are suffering the same fate; struggling to get a handle on seemingly disparate forces as evidenced in Treasury yield volatility this month, veering from a three-year low of 1.43% to as high as 1.90%, before settling at 1.68% last Friday.

The growth outlook – and the likelihood of further Fed rate cuts – for the rest of the year is mostly dependent upon the vigor of household demand. As such, barometers of consumer health, ranging from unemployment filings to sentiment to income trends, will be the primary focus to determine the future direction of interest rates and for signals of what the Fed has up its sleeve.

The biggest driver of consumer’s ability to keep spending is the stability and growth in incomes. While recent gauges of personal spending have come in on the soft side, sustained growth in incomes indicate that a stall in consumer’s appetite for spending isn’t imminent. However, recent signals of dimming consumer optimism implies that consumers have a limit. The biggest long-term question now is whether the rising income trend will fade as growth and hiring slow over the next few quarters. If employment-generated income is petering out, consumers and the economy will not be far behind.

As such, this Friday’s September jobs report – historically the most significant piece of economic data for interest rates – takes on even greater significance than usual. We’ll be parsing the report for clues on the extent to which increasingly defensive postures by employers are having on the jobs market. We’re expecting a reading of 140K in new jobs in September, and a 3.6% unemployment rate, in line with the slowing 156K three, 151K six, and 173K 12-month averages.

While we expect new job creation to slow through year-end, we don’t expect it to deteriorate to the point of showing mounting layoffs. This, combined with a resilient but slightly diminished consumer, will be enough to avoid the risk of a broader economic stall.

Take-Away:  With Germany likely tipping into a technical recession in Q3, a no-deal Brexit likely pushing the U.K. economy into a downturn in 2020, Japan’s economy losing momentum, a seemingly never-ending US-China trade war, and escalating US political drama, the risks to US economic growth have undoubtedly risen.

While we expect that we’ll ultimately avoid dipping into a recession, slower growth in consumer spending and the likely imposition of higher tariffs on Chinese goods on October 15th will push the Fed to cut rates again by 0.25% at its next meeting on October 30th. Should the trend continue, we expect another 0.25% cut on December 11th.

For now, we expect Treasury yields to consolidate in their current ranges despite elevated volatility. Moves in either direction will be limited over the next couple of weeks as the Fed continues its reluctance to commit to further rate cuts and foreign spillovers keep markets on edge. 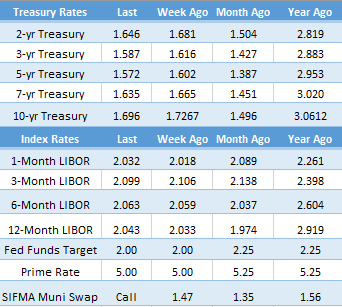 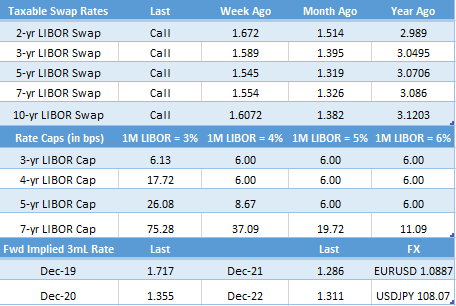 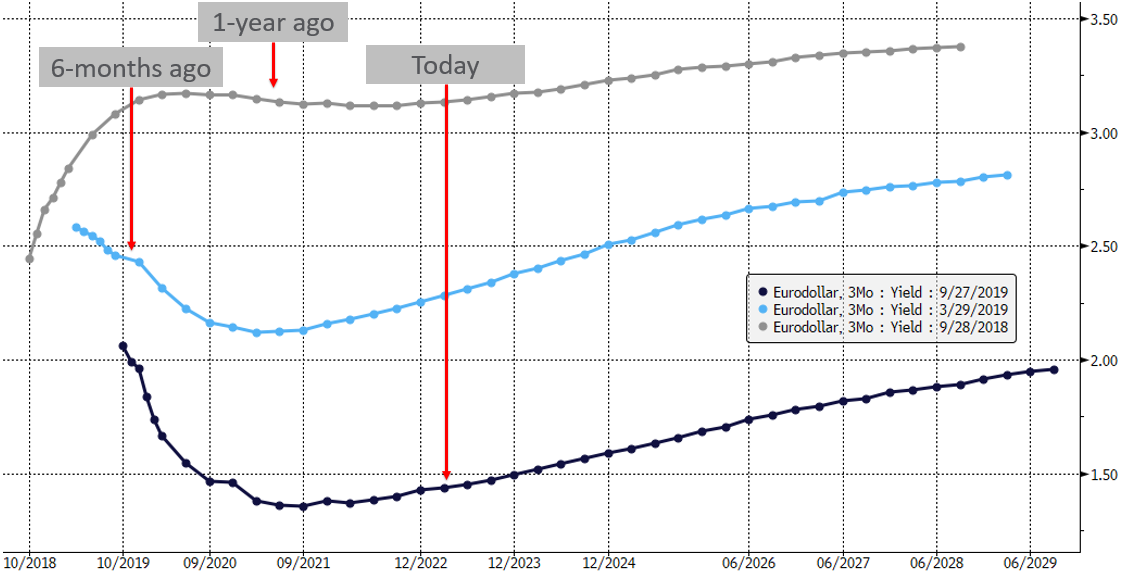 LIBOR – What’s in a Name?
Scroll to top