Last Week: Interest rates and equities both edged higher on the week as markets held their breath amid a Congressional impasse for the extension of stimulus for individuals and businesses. The yield on the US 10-year Treasury note, at 0.56%, wrapped the week just one basis point higher than where it started, and one-month LIBOR edged higher by 1 basis point to 0.16%. The price of a barrel of West Texas Intermediate crude oil rose $1.50 to $41.50, while the US Dollar weakened, and Gold strengthened. Treasury yield volatility, a key driver of the cost of rate caps and swaptions, drifted lower throughout the week.

Public service announcement – the LIBOR transition is still on track to occur at the end of 2021. To prepare our clients, we are launching a free series of educational webinars on how the transition impacts debt and hedges and providing attendees with certifications of completion. Interested? Further details on how to sign up will be announced in future editions of “Straight to Smart”.

SOFR rate caps are more expensive than their LIBOR equivalents – why? As Freddie Mac races toward its fall deadline of replacing LIBOR-based product offerings with SOFR products, we recently polled rate cap banks for indicative SOFR cap costs. The conclusions? Several of the banks would not price a SOFR cap, and two banks provided indicative costs that were “off-market”. None of the leading Freddie approved rate cap providers are able to sell SOFR caps at present, but one will be able to do so by the end of the month, and others are expected to follow in the next 60 days, just in time. In a likely temporary wallop to your pocketbook, SOFR rate caps are being offered at a ~25% premium to their LIBOR equivalents. Why? The rate cap banks have a limited ability of offset their SOFR risks due to the nascent market for SOFR instruments in general, and they are passing on this risk to buyers of SOFR rate caps via a higher price. However, as more banks increase their trading of SOFR-based instruments, SOFR rate caps will eventually become competitive in the capital markets and approach the cost of their LIBOR equivalents, hopefully by early 2021. Fortunately, Freddie Mac borrowers using SOFR products for financing will temporarily be allowed to close with a LIBOR cap, but must escrow funds to purchase a SOFR cap within 12 months of closing. Need more detail? Give us a call.

America’s jobs market continued last month’s rebound, but the devil is in the details. Despite the resurgence of US COVID-19 cases in July, the nation’s economy added a better-than-expected 1.76 million jobs last month, as the unemployment rate fell to 10.2% from 11.1% in June. Many sectors posted job gains, but those increases broadly decelerated from June’s pace: The goods-producing sector growth stalled at nearly zero (39k vs. 515k prior), while services fell to 1423k from 4222k. Job gains in leisure and hospitality – the front line of the pandemic – dropped to 592k from 1981k in June. Most concerning is the growth slowdown in higher-paid jobs, such as professional and business services (170k vs. 318k) and education and health care (215k vs. 567k). The government added jobs in July, but disruptions in reopening schools will likely result in job losses at the state and local level in the coming months. All told, the state of the labor market in July remained significantly below the pre-pandemic peak even taking into account the 7.5 million new jobs in May and June.

Our take: While July’s headline job gains are inspirational, momentum in hiring is slowing as the economy enters a prolonged period of elevated unemployment, which will weigh heavily on consumer income growth, personal spending and by default, top-line growth. Despite President Trump’s thin lifeline of support over the weekend (detail below), July’s better-than-expected increase in hiring doesn’t reduce the urgency for the administration and Congress to break the stalemate and create a more durable structure of fiscal support for individuals and businesses. A multitude of unemployed, a spike in bankruptcies and elevated uncertainty have already resulted in the permanent loss of millions of jobs as momentum in job gains is slowing. Extending fiscal support can provide a financial bridge over the health crisis and still save some jobs, which will otherwise vanish for good. For interest rates, it is a scenario that ensures ultra-low levels for even longer.

President acts amid Congressional stalemate. President Trump’s redirection of disaster-relief funds over the weekend will provide $300 a week in federal aid to the unemployed, plus $100 in state funds, down from the weekly $600 benefit provided by the Cares Act that expired in July. The President’s overture is capped at $44 billion, which at the current level of unemployment will run out in one to two months, requiring another fix from Congress before November’s Presidential election.

Our take: While it’s certainly better than nothing, the real question is if the President has this authority since Congress holds the power of the purse. The President’s action may help avoid a complete lapse in relief for tens of millions of unemployed Americans – who drive 70% of economic activity – as Congress dithers in the fog of crisis politics. Despite best intentions however, the funds for the unemployed in the President’s package are much more limited than in prior months, and any benefit to unemployed consumers from the payroll-tax deferral hinges on whether employers will stop withholding the money from individuals’ paychecks. The President’s package contains no guidance on whether the accumulated amount of payroll-tax deferral will be forgiven completely or just delayed. As a result, some employers may choose to do nothing in the face of uncertainty, fearing that if Congress fails to pass a new relief package, they could be stuck trying to claw back money from their employees to settle their obligations to the IRS. Lastly, the package does not include an extension of aid to small businesses, many of which are running on the fumes of Paycheck Protection Program (PPP) funds. To sum it up, it’s not the people with a paycheck that are the problem it’s the people without one. As such, Congress must clear its logjam, and soon.

What to Watch This Week: Data on retail sales, industrial production and producer and consumer prices dominate the calendar in the coming days, with the former likely showing only modest gains than in the previous couple of months. Overall, the data this week will resemble last Friday’s July jobs report, signaling that the economy is indeed recovering, but the pace is slowing. The near-term trajectory of recovery depends on the outcome of ongoing stimulus package negotiations in Congress. As such, any news of a breakthrough or a continuation in the stalemate will dominate the headlines, overwhelming data releases.

Big Picture: The Treasury Department is taking advantage of low interest rates by increasing long-term debt auctions – to pay for the trillions in stimulus – by billions more per month than most have anticipated. The additional long-dated issuance, in 10, 20- and 30-year Treasuries, will keep longer term yields low for the foreseeable future. 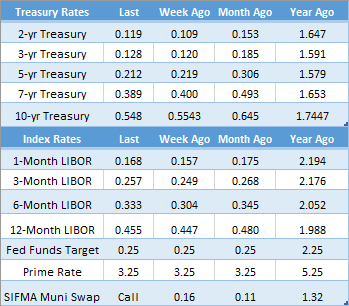 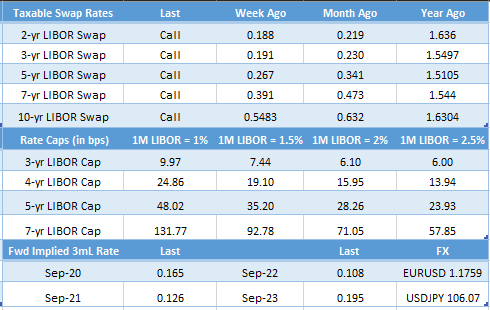 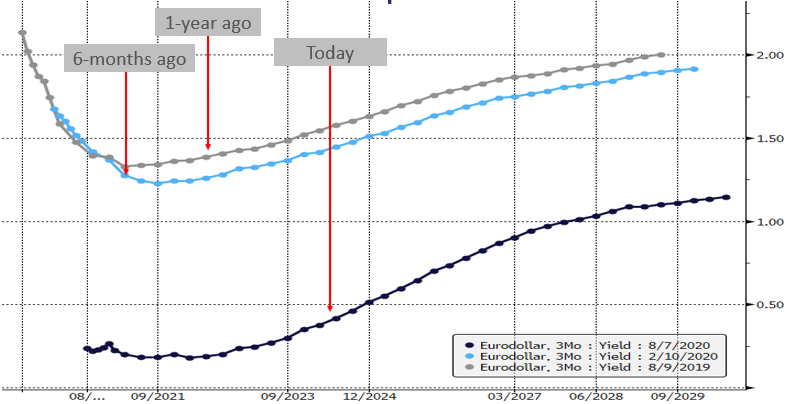 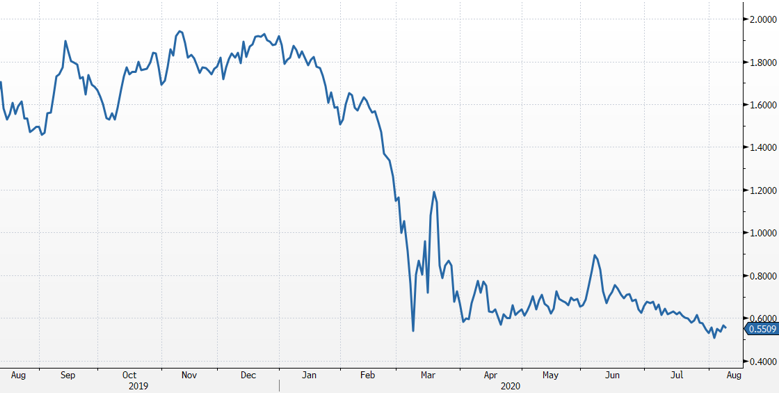 Election 2020: A Vote for Long Term Rates
Scroll to top