Last Week: Interest rates and equities both moved lower on the week, as the incessant trickle of negative economic data and uncertainty from the pandemic continued to grip markets struggling to formulate a long term outlook.  The US 10-year Treasury note traded within a tight four basis point range, wrapping the week at 0.64%. 1-month LIBOR continued its multi-week descent by a modest two basis points through the week to 0.17%. The price of a barrel of West Texas Intermediate crude oil firmed to $28.70 from $24.50 a week ago, as the US Dollar and Gold both strengthened on the back of global investors continuing their move toward safe havens. Treasury yield volatility continued to mellow, falling to 4.71 from a high of 5.35 early in the week. For perspective, volatility peaked at 16.39 at the onset of the pandemic in mid-March.

Interest rate swaps: a public service announcement. We have been receiving an overwhelming number of calls lately – probably more than ever – from borrowers considering interest rate swaps to mitigate against floating interest rates rising over the long-term. In many of these conversations, the borrower is at the mercy of their bank that is offering the “best” hedge to lock in historically low rates. While aspects of a swap may be beneficial or convenient on the surface, they may add risk, additional costs (swap fees), or limit future flexibility. Many borrowers are also dealing with amendments and forbearance complexity as their loans experience the COVID-19 shock. We can’t stress enough how important it is to seek independent advice to help clarify what’s being offered, and more importantly, to ensure borrowers have a comprehensive understanding of all the costs and risks involved. The bottom line: The bank is trying to sell you something. It’s your job to understand it. Do you? “Risk comes from not knowing what you are doing.” -Warren Buffet

Dire economic data keeping a lid on rates. Economic data released throughout the week painted a dim but dated picture of the state of the economy. A broad swath of indicators – everything from retail sales, manufacturing, capex to consumer sentiment – showed deterioration on a grand scale, with some plummeting to lows never seen in the history of data collection. Nearly 3 million first-time jobless claims were filed for the week ending May 9th, while continuing claims (when a claim for jobless benefits is accepted, versus just filed) totaled nearly 23 million. With much of the nation locked down, April retail sales plunged a record 16.4%. Sales in 12 of 13 categories were lower, except for online sales. Lastly, industrial production fell 11.2% in April. The bleak readings spurred buying of long-dated Treasury bonds amid a shortage of safe assets in the world that offers investors any return at all, helping to push the 30-year Treasury yield as low as 1.25% last Friday, from a peak of 1.45% this month. Markets now see the Fed unable to raise rates for the next five years, especially with inflation nowhere to be seen. Negative interest rates?  If you want to buy-out the 0.00% floor in your loan, expect to pay up!

Jobless claims still offer the best clues into the depth and duration of the economic pain.  For the moment, economic indicators shouldn’t be taken as the full story until a trend is established.  We’ve been through “head-fakes” before and the outcome is always unfavorable. In the midst of it, a stabilization of financial markets and ongoing recovery in risk assets – like stocks – are encouraging signals that a U.S. economy in steep recession may be approaching an inflection point. While encouraging, until the pace of layoffs slows, estimates of the extent of the economic contraction will rely more on expectations rather than observations.

How does one best observe rather than guess? In this fast-changing environment, any glimmers of recovery will first appear in private daily and weekly data. As an example, look no further than map requests from Waze and Apple, requests for rides from Uber and Lyft, sales from the fast food chains or home buyer demand from Redfin or Zillow, all of which are showing increased activity which could equate to the possibility of a bottoming of the economic malaise. For weekly data, jobless claims have been among the timeliest, and hence most critical, gauges of economic strain in the early stages of pandemic. It will similarly serve as the leading indicator of an economic bottom, and finally serve as a preliminary glimpse into when the economic recovery will begin and what it will look like. The pace of declines in jobless claims should accelerate in the coming weeks as more states gradually reopen their economies. That, combined with the looming threat of a second or even third wave of infections and subsequent lockdowns, signal a steep decline in Q2 GDP to the tune of ~40%.

At the end of the day, we expect the lockdown recession of 2020 – spanning roughly March through June – will show the sharpest economic contraction since WWII, with a peak-to-trough decline in GDP of approximately 12%. Uncertainty about the economic outlook remains high no doubt, but as long as second-round effects from the recession remain manageable and progress continues on covid treatments and vaccines, most economies in the world should be able to claw their way back over time.  America likely won’t return to its pre-pandemic economic peak until 2022 at soonest, and the Fed has no hope of raising rates for at least a couple of years. We suspect 10-year US Treasury yields will likely rise to 0.80% by the end of the year and trade somewhere near 1.35% by the end of 2021. Yield curves will also steepen over the next couple of years. Unlike the front-end of the Treasury yield curve, long-term Treasury bonds are less controlled by the Fed, and are more sensitive to increasing supply.

Resist the hype around negative interest rates. To summarize various commentary from Fed officials last week, they aren’t confident that the support measures rolled-out thus far will be enough to spur a recovery, and seem willing to adapt and expand the Fed’s stimulus as needed, particularly if the recovery proves to be sluggish. As such, in public speaking engagements last week, Fed Chair Powell expressed his lack of optimism by acknowledging a growing sense that the recovery will come more slowly than we would like, and opened the door to even more help from the Fed to support the economy. However, Powell went out of his way – yet again – to stress his opposition to negative interest rates as a viable policy tool. Not only did Powell reaffirm this stance in the speeches, he also emphasized the unanimous agreement with Fed officials that the use of negative interest rates is off the table.  If negative interest rates are off the table, what’s ON the table? Curve sculpting. No, its not a new fitness fad to lose weight, it entails the Fed setting a target for the 10 and 30-year Treasury yield in addition to one on its overnight benchmark, the Fed Funds rate, and buying or selling Treasuries as needed to hit the target. It is a tool the Bank of Japan has implemented successfully in recent years, and a mechanism that Fed officials had been discussing openly before the pandemic began. We’ll explore it further in future editions of DL Monitor.

What to Watch This Week: The US Treasury will officially expand its fund-raising arsenal on Wednesday with the $20 billion auction of a 20-year Treasury bond, the first time it’s done so since the 1980’s.  Judging by the success of Treasury auctions in recent weeks and the ultra-low to negative rate environment globally, we expect investors will lap up the offering with vigor. The 20-year bonds will likely settle near a yield of 1.10%; historically cheap for 20-year debt but appealing to investors nonetheless given that the 10-year Treasury is yielding 0.63%.

The most important event of the week is Fed Chair Powell’s testimony to the Senate Banking Committee on Tuesday. Powell, joined by Treasury Secretary Mnuchin, will stress that Congress and the President must do more to help the economy recover, but likely won’t go so far as making specific fiscal policy recommendations or comment on current legislation making its way through Congress.

Elsewhere, Fed Chair Powell (again) and Fed Vice Chair Richard Clarida will also deliver public remarks later in the week, and the minutes of the April FOMC meeting will be released on Wednesday. Of course, everyone watching/reading the Fed’s communications in the days ahead will be on high alert for any further discussion of negative interest rates, especially considering Fed funds futures recently forecasted negative rates in early 2021.

Big Picture: As the US Treasury continues to finance its $3 trillion funding hole this quarter, there’s been no sign of any spike in borrowing costs, as horrific economic data, great uncertainty in the future and an increasingly grim economic outlook have all conspired to keep rates low. There’s no reason we’ll see any appreciable move higher throughout the rest of 2020, outside of any curve sculpting efforts by the Fed, which are a fly in the Chardonnay of anyone’s interest rate forecasts.

The question to ask yourself now: How can I best position my company for the future given the ultra-low rate environment? Smart borrowers are actively planning now – ask us how. 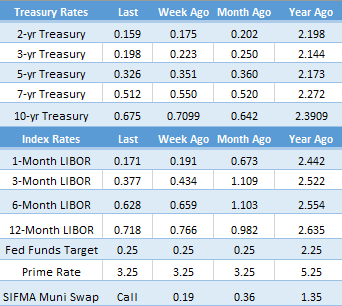 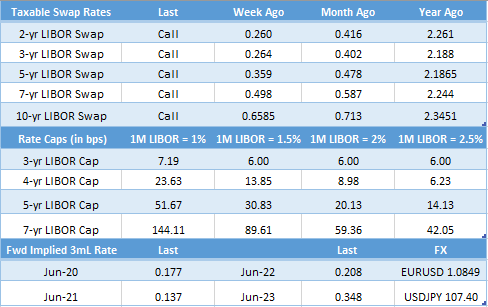 Green Shoots of Recovery or Head Fake?
Scroll to top