Last Week: Rates fell and equities were little changed as markets digested escalating tensions on the Korean Peninsula and the potential impacts of hurricanes Harvey and Irma on the US economy. The odds of a third US Federal Reserve rate hike this year declined, prompting a drop in the yield on the US 10-year Treasury note to 2.06% from 2.14% a week ago, as 1-month LIBOR rose to 1.2361% from 1.2316% over the same time period. Oil rose to $48.95 from last Friday’s $46.75, the US Dollar fell while Gold traded flat. Market volatility, as measured by the Chicago Board Options Exchange Volatility Index (VIX), advanced to 12.35 from 10.3 on the back of weather-driven uncertainty.

Fed Vice-Chair resigned. The US Federal Reserve’s seven-member Board of Governors is now down to just three members, with Vice Chair Stanley Fischer resigning last week, effective in mid-October. US President Donald Trump is unlikely to appoint Gary Cohn, his chief economic advisor, to replace Janet Yellen when her term expires in February. Cohn’s sharp criticism of Trump’s reaction to the recent violence in Charlottesville, Virginia, has diminished his chances of being nominated to the top job at the Fed.

Debt ceiling crises averted – for now. Like has happened so many times in America’s past, President Trump and the Democrats kicked the debt ceiling can down the road. With the government close to hitting the debt ceiling and the end of the fiscal year approaching without a budget in place, Trump struck a deal with congressional Democrats to extend the debt ceiling and fund the government for three months while providing Harvey relief funds for Texas and Louisiana. This is the first time Trump has reached across the political aisle to strike a deal. Republican leaders pushed for a longer-term package to avoid having to repeatedly vote to raise the debt ceiling – an unpopular move with the party’s base of supporters – before next year’s mid-term elections.

North Korea became even more menacing. Markets were unsettled early in the week as Kim Jong-un’s nuclear program continued to advance rapidly. North Korea successfully tested a hydrogen bomb, further raising the stakes in its standoff with the US.

What to Watch this Week: The market’s primary focus will be on assessing the economic fallout from Hurricane Irma and the increasing clarity of the economic impact of Hurricane Harvey. The two storms will create an economic data brown-out of sorts, as they increasingly distort economic gauges, beginning with this week’s read on retail sales, jobless claims, producer prices, consumer prices and industrial production. It will be awhile before the effects of the two storms are shaken off. What’s it mean for rates? They’ll stay near their current low levels for a while yet.

Given the looming Sept 20 Fed meeting, the Fed will have to reply upon its read of the economic tea leaves prior to the storms to assess the appropriate amount and timing of the next rate hike. While a Fed hike before years-end is now unlikely, we believe the Fed’s resolve to begin unwinding its balance sheet in October 2017 remains, and is yet another reason for yields to stay near their 2017 lows.

Take-Away:  America’s monthly job growth has averaged 175K YTD, wages are slowly rising, consumer confidence is at the highest level since 2001, and household balance sheets are the strongest since 1980. The current US economic expansion just celebrated its 8th birthday, making it one of the longest stretches ever without a recession. Only the 10-year expansion during 1991-2000 and the 9-year expansion from 1961 to 1969 had longer durations. The median length of the 16 expansions since 1921 has been 42 months. We’re now at 96 months. Along with the ever-present question about an equity correction, another frequent inquiry is “when will the next recession occur?” Surely one is coming – the expansion won’t last forever – but we doubt strongly that we’ll see one in the next 18 months. Get comfortable with the 10-year treasury yield near 2.15% and 1-month LIBOR at 1.24%-ish. We’re going to be here for a while. 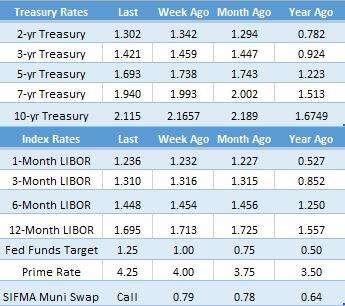 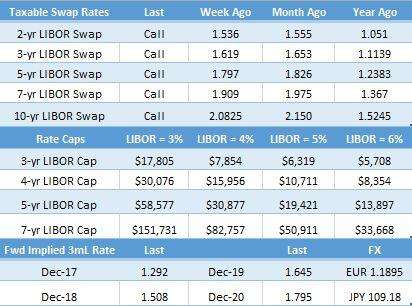 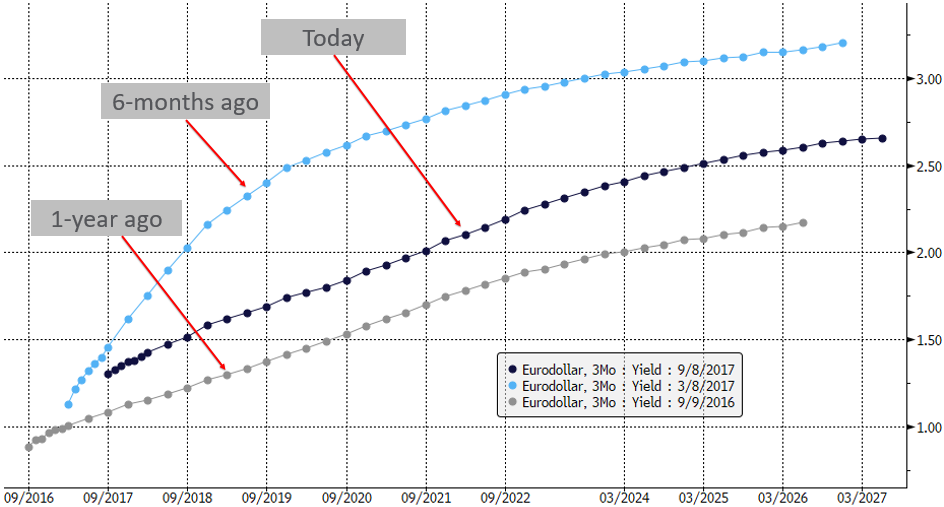