Last Week: Interest rates and equities extended their gains, with fresh record highs posted globally. Solid economic data and hopes for a tax reform package helped push the yield on the US 10-year Treasury note to 2.38% from 2.32% over the last week, with 1-month LIBOR also moving higher to 1.2350% from 1.2338% the week prior. Oil slipped to $49.50 a barrel from $51.50 over the same period while the US dollar and Gold strengthened. Market volatility, as measured by the Chicago Board Options Exchange Volatility Index (VIX), closed at a record on Thursday and traded at 9.50 early Friday.

US payrolls turned negative for first time since September 2010. As we expected, Hurricanes Harvey and Irma combined to bring an end to a seven-year streak of positive US payroll reports. Thirty-three thousand jobs were lost in September because of the storms, though the unemployment rate dipped to 4.2% due to a temporarily smaller labor force. Average hourly earnings rose to an annual rate of 2.9%, but economists warned that storm-related distortions are likely partially responsible for the rise. While it sounds horrible, don’t get excited – it will likely be another month or so before the storms’ impacts stop distorting economic data.

The Global economy continues its expansion. Figures from the United States, Europe and China released last week all showed continued solid economic growth. September figures for the US manufacturing and services sectors both showed their strongest readings in more than a decade, but the data is widely understood as being distorted by the recent hurricanes. The Institute for Supply Management manufacturing index rose to 60.8, the highest level since September 2004, while the non-manufacturing reading came in at 59.8, a level not seen since August 2005. European data were similarly robust, and China also showed continued upward momentum.

Trump begins identifying the next Fed Chair. News broke that aides to President Trump have narrowed the list of candidates for chair of the Federal Reserve to four, or perhaps five, people. Sitting Fed governor Jerome Powell, former governor Kevin Warsh and National Economic Council director Gary Cohn have all reportedly spoken with the president about the position, while Stanford University economist John Taylor has apparently not been interviewed but is said to be under consideration. All are known quantities to the markets, with Warsh and Taylor seen as the most hawkish of the group. If current Fed Chair Yellen isn’t in the mix – which hasn’t been determined yet – our money is on Kevin Warsh – more on him in the weeks to come.

This Week: The key economic releases this week are the Consumer Price Index and Retail Sales reports on Friday, both of which are expected to be distorted from the effects of the recent storms and therefore unreliable. Additionally, the minutes from the September FOMC meeting will be released on Wednesday. Markets will scour the minutes in search of greater clarity regarding the Fed’s positive adjustments to its economic forecasts as well as any lingering reservations from policy makers on the start of the balance sheet unwind. Outside of data releases and the Fed meeting minutes, there are several speaking engagements by Fed officials, including a speech by Chair Yellen on Sunday. While interesting, none of this week’s events will derail the markets high and growing expectation of a 0.25% Fed rate hike in December.

Take-Away: Last week’s jobs data confirmed that there will be significant positive and negative distortions to economic data releases this month, but we’re sure that the swift recovery efforts will be a boon to data set for release further out on the calendar. However, the data noise creates a challenging landscape for the Fed as it navigates both the market impact of its balance sheet unwind and whether the economy can endure its planned December 0.25% rate hike. While we still believe the December hike will happen,  but the Fed will officially scale back its planned three hikes in 2018 and two in 2019 before the end of the year. As a December hike looks more and more likely, 1-month LIBOR will begin to move higher in lockstep.

Switching gears, President Trump will formally announce his chosen Fed Chair nominee in the next couple of weeks, and seems to want a dove – one who supports low interest rates – to support his agenda. With current Fed Chair Janet Yellen being the consummate dove, it’s very possible she’ll be renominated. Her chances could be derailed if her opposition to deregulation is judged to be a deal killer however. 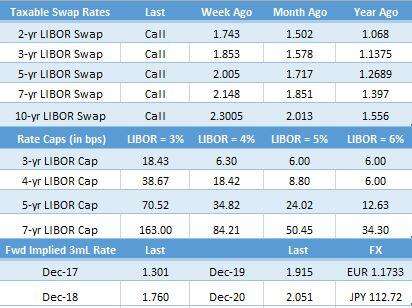 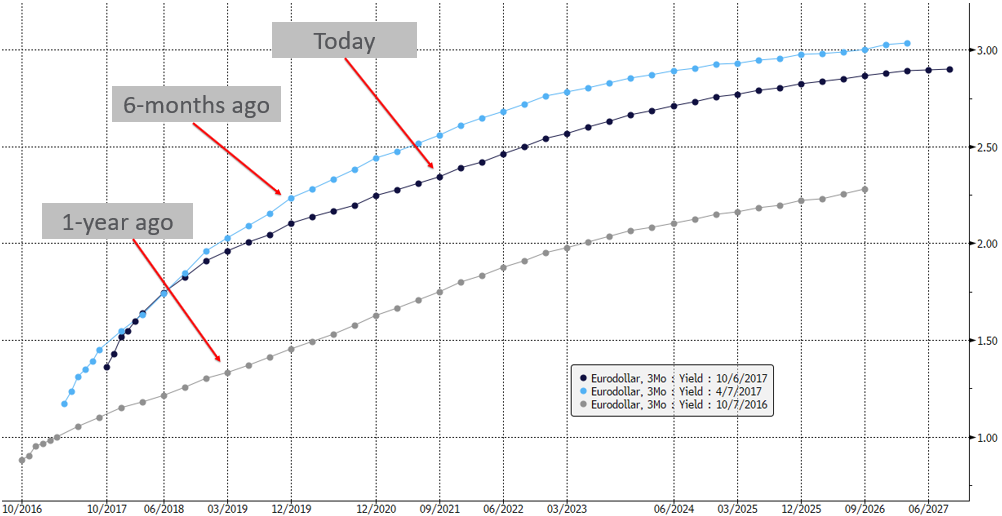