Last Week: Interest rates and equities were both up slightly amid a pervasive summer slumber in markets, a light data calendar, a constant drone of trade-related headlines, strong US economic and earnings growth and signs of optimism regarding a Brexit agreement. The yield on the US 10-year Treasury note edged up 4 basis points to 2.86% while 1-month LIBOR began its steady ascent toward 2.25%, wrapping the week at 2.11%. Oil rose a miniscule 85 cents to $69.95 a barrel, as the US Dollar strengthened, and Gold fell. Treasury market volatility, as measured by the Chicago Board Options Exchange Treasury Volatility Index (TYVIX), rose slightly to 3.65 from 3.58 a week ago.

NAFTA trade talks dominated headlines as negotiations enter the home stretch. The three NAFTA members, the US, Canada and Mexico, are rushing to conclude a renegotiated North American Free Trade Agreement to meet the US Congress’ legislative timetable before year-end. A US-Mexico deal was reached last week, final details of an agreement with Canada have yet to be worked out but a deal is expected soon. Beyond NAFTA, President Trump threatened to impose an additional $200 billion in tariffs on China as soon as this week. Given that China only imports $160MM in goods from the US, it could resort to imposing non-trade barriers on US companies – things like regulatory harassment – as retaliation.  As we’ve said repeatedly, the trade topic will likely dominate headlines for the rest of the year, with China likely being the final hold-out to a deal with the US. China will ultimately cave to many US demands however, as its economy is far less resilient to a drawn-out US trade conflict.

US consumer confidence hit a cycle high. Last month US consumer confidence rose to its highest level since October 2000, fueled by a buoyant labor market and regardless of stagnant wage growth. The surge in confidence suggests that trade jitters are not having a material impact on US consumers, whose spending remains robust. Consumer spending was a solid contributor to last week’s upward revision in US Q2 GDP to 4.2% from an earlier 4.1% estimate.

Emerging market volatility at historic levels. Emerging markets have been struggling in the midst of a record-setting bull run in their stock markets. A recent surge of volatility in EM rivals the two other recent epic surges in volatility, during the financial crisis (2007 and 2008), and events surrounding the 9/11 attacks and Argentina’s debt crisis (2001 and 2002). Recent events have centered around uncertainty over the recent trade war, the crisis in Turkey, Argentina’s slow implosion, Brazil’s and South Africa’s political turmoil and losses in Chinese equity markets. The failure by some EM central banks to proactively raise interest rates has left vulnerable some countries trying to cope with the strong US dollar. While it’s easy to dismiss events in the emerging markets as unimportant, the trillion-dollar question remains: what are these markets telling us about future US growth relative to current expectations?

What to Watch this Week: The event and data flow kick back up in the days ahead, with gauges on productivity, services activity, factory orders and durable goods all on tap, crowned by Friday’s release of the jobs report for August. A steady stream of speeches by Fed officials is also scheduled throughout the week as the Fed preps markets for the looming 0.25% rate hike on Sept 26th.  In summary, this week’s data releases are likely to reinforce the impression that economic growth remains strong, and that this month’s 0.25% Fed rate hike is justified.

Take-Away: Rates will likely hold their current levels in the week ahead, as the US Treasury’s reduced bill auctions are offset by growing market expectations of an imminent Fed rate hike, bolstered by a robust August jobs report showing accelerated jobs growth. We expect the data to show that 190K new jobs were created in August, wages ticked up ever so slightly, and that the unemployment rate remained steady at 3.9%. Such an outcome would give the Fed confidence to motor ahead with its planned hike late this month, followed by at least two more next year before pausing, as US growth moderates at the same time inflation rises firmly above 2%.

As the Fed continues its hikes, the yield curve will flatten further and could eventually invert, but economic recession likely won’t show up until mid to late next year. 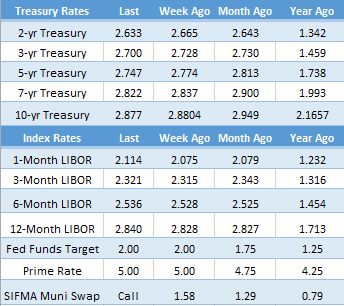 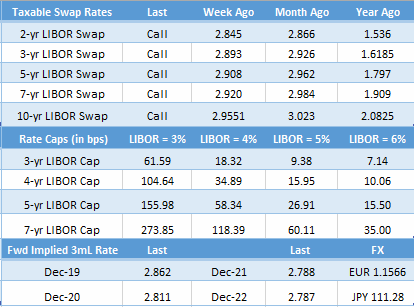 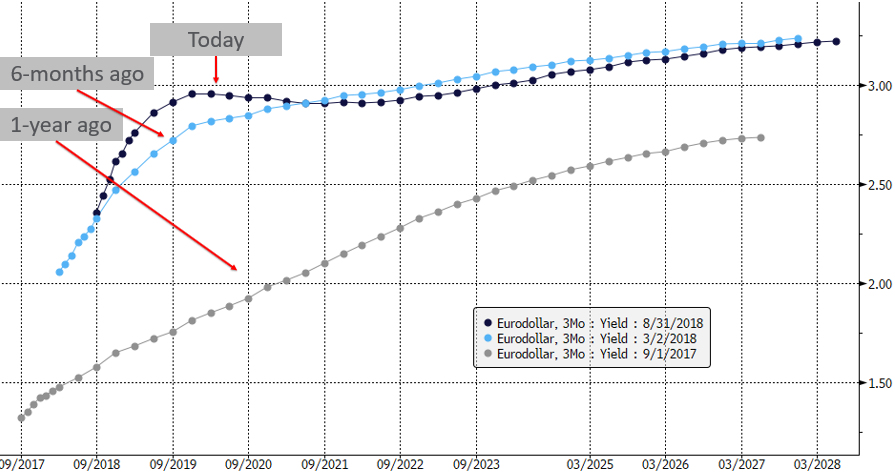