For a peek into where rates are headed this year, see our 2019 Rates Forecast.

Last Week: Interest rates were mixed, and equities rose amid growing optimism of a US-China trade deal. The yield on the US 10-year Treasury note rose seven basis points from a week ago to 2.78%. 1-month LIBOR drifted lower to 2.50% from 2.51% the week prior. Oil advanced $1.20 to $53.10, while the US Dollar strengthened, and Gold fell. Treasury yield volatility, as measured by the Chicago Board Options Exchange Treasury Yield Volatility Index (TYVIX), declined to 3.84 from 4.05 the week prior.

The Fed is flying blind as US shutdown interrupts the data flow. The steady flow of critical US macroeconomic data – that markets and the Federal Reserve rely on in order to gauge the health of the economy – is being disrupted by the partial government shutdown. As an example, US retail sales data for the critical holiday season has been delayed due to a lack of funding for the US Department of Commerce, and key pieces of data in the week ahead will likely be delayed as well. While some data continues to flow from departments that were funded earlier in the cycle, the interruption makes the Fed’s job that much more difficult as it interprets conflicting economic signals. The longer the shutdown drags on, the more uncertain the Fed’s stance on future rate hikes becomes.

A breakthrough in US-China trade war negotiations?  Not so fast. Treasury yields rose and US equities jumped notably late last week from reports that the US Treasury had proposed lifting some or all tariffs on China in order to calm markets and give Beijing the incentive to make deeper concessions to end the now months-long trade conflict. While bold, it seems the idea doesn’t have the backing of trade hard-liners who lead negotiations, nor does it have the approval of President Trump. Markets now look to the next round of talks when Chinese Vice Premier Liu visits Washington at the end of this month. To refresh your memory, there are three categories of trade issues being debated: 1) reducing America’s trade deficit with China, 2) opening China’s domestic markets, and 3) changing its industrial policies. The first is the easiest to solve, the second is negotiable, while the third is by far the most difficult. As we’ve been saying for months now, China will ultimately cave to America’s demands to reduce the trade deficit and open China’s markets – as they can be solved by money, which China has plenty of – but the industrial policy issue will remain a major sticking point which will never be resolved. Outside of the general “risk-off” mood markets take on when the trade talks look like they’re deteriorating, we don’t expect any real impact to the US economy for now. However, should talks go south in a meaningful way and tariffs are escalated, eventually the resultant higher prices will show up in the inflation data.

The IMF forecasted weaker global growth. The International Monetary Fund cut its 2019 growth forecast for the world economy, predicting growth at the weakest pace in three years. It was the second downgrade in three months. While gloomy, the fund left its projections for the U.S. and China unchanged and even anticipates a pickup in worldwide expansion to 3.6 percent next year. The forecast was validated by recent reports of slowing growth in Germany – the economic lynchpin of Europe – and China, which is experiencing its slowest growth since 1990. The news eroded support for US Treasury yields as America remains the only major economy that could see rate hikes this year, incenting global investors to buy US treasuries for their high yields when compared to other developed economies.

What to Watch This Week: Due to the holiday-shortened week and the suspension of various data releases due to the government shutdown, the economic calendar is a light one in the days ahead. Existing home sales, weekly jobless claims and the index of leading economic indicators are the only noteworthy releases, and all are expected to show a slowing but still resilient US economy.

Fed officials will go quiet this week ahead of their January 30th interest-rate decision. No one expects any rate action during 2019’s first FOMC meeting. What will be watched closely during the meeting however is the Fed’s assessment of economic conditions, as they provide a signal to markets of the Fed’s hiking intent. Further, Fed Chair Powell will have the opportunity to refine the central bank’s signaling during the post-meeting press conference – each meeting will have a press conference this year. We’ll offer more insight on the topic next week.

Take-Away: If you missed it last week, know that the sharp decline in long-term interest rates since November has resulted in a noteworthy flattening of the U.S. Treasury yield curve. With the gap between short-term and long-term rates at the narrowest level since 2008, borrowers have an attractive opportunity at the moment to lock in synthetic fixed rate term funding. For example, locking a rate 2 years forward for 10-years is only 6 bps higher than a 10-year rate starting today. As with many market opportunities, it won’t last. Contact us to learn more.

While the flow of economic data has been reduced to a trickle, forcing markets to stumble around in a darkened room of sorts, data on prices – aka inflation – has largely escaped the government shutdown. Recent releases have signaled that inflationary pressures are muted when compared to their stellar growth last year, prompting some to blow off any possibility of an inflation-driven Fed rate hike this year. We beg to differ, believing that inflation lags the economic cycle by as much as a year, and could show up more meaningfully later in the year in response to robust growth seen late last year. Should the economy remain on stable footing in the meantime, the Fed will respond by pulling the trigger on at least one hike this year. For a deeper look, see our 2019 Rates Forecast. 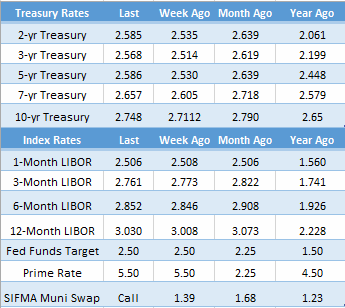 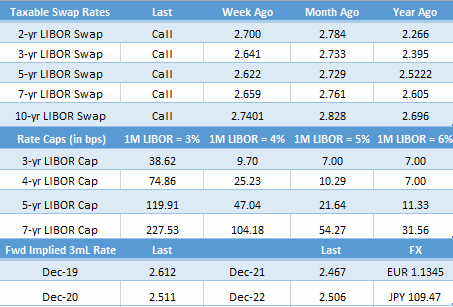 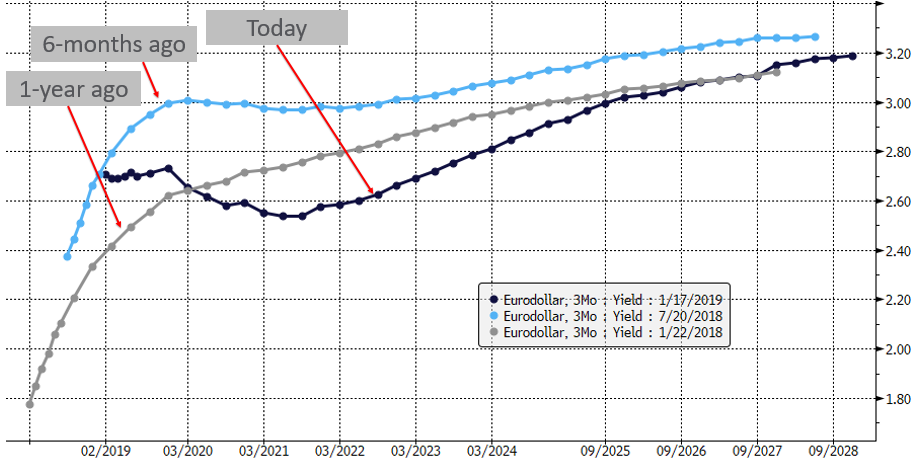