What You Missed: Interest rates fell across the curve and equities posted a fourth straight week of declines as markets continued to digest looming Fed rate hikes. The yield on the US 10-year Treasury note fell a basis point to 1.76% after peaking at 1.86% mid-week. Short -term interest rates, like LIBOR and SOFR, staged modest declines, remaining close to all-time lows. The price of a barrel of West Texas Intermediate crude oil reached its highest level since September 2014, $88.40, amid concerns Russian oil exports will be interrupted if Russia invades Ukraine. Elsewhere, the US Dollar strengthened, and Gold weakened. Treasury yield volatility, a key driver of the cost of rate caps and other option-based derivatives, rose, approaching highs not seen since November.

Fed confirmed its hiking bias but left room to maneuver. While the Fed left rates unchanged at its policy meeting last week, it set the stage for a series of rate hikes beginning with its next meeting in March while also announcing the end of its asset purchases early that month. Chair Jerome Powell would not rule out several potential policy choices, including a 50-basis-point hike, or the potential for rate hikes at every meeting rather than following the quarter-point-a-quarter cadence it followed during its last tightening cycle.

During the post meeting press conference, the Fed Chair stated that the economy is in a substantially different place now than it was during the previous cycle, citing considerably faster growth, higher inflation, and a tighter job market as examples. Powell stressed that there is plenty of flexibility to raise rates without damaging the job market, while downplaying the recent sell off in equity markets and higher interest rates across the curve. He also stated that the Fed’s balance sheet is far larger than it needs to be, implying that quantitative tightening, via the selling off its massive holdings of Treasury bonds, may start in the coming months.

Our take: Overall, Chair Powell broadcasted a bias to hikes rates, and soon. Assuming the economy doesn’t fall of a cliff in the meantime, expect at least a 0.25% rate hike in March. Given that expectation, the trillion-dollar question now is the pace of the Fed’s rate hikes, a topic where Powell was non-committal. Markets may struggle to find a consensus view on the subject, leading to a potentially volatile period.  For now, the presumed pace of hikes is once per quarter. The non-answer by Powell opens the door to a potentially more aggressive path of rate hikes than most expect, while also implying that the Fed will stand ready to change course if downside risks to the economy materialize.

Regarding the Fed curtailing it bond purchases as a means of tightening financial conditions, aka “tapering”, last week’s Fed meeting confirmed that it will stick to its previous schedule for ending bond purchases in March. That avoids any hint the Fed was more worried than it was in December about acting to tamp down inflation. Secondly, the Fed stated that it intends to begin reducing the size of its massive balance sheet – that is, selling some of its massive holdings of Treasury bonds, thereby raising long-term rates – at some point after it begins hiking rates. Chair Powell gave no hint on when that would begin, but that when it does happen, it would be orderly and predictable – just what markets wanted to hear.

When asked the key question of whether rate hikes would undercut inflation without harming the jobs market, Powell implied that a long, incremental rate hike cycle lies ahead of us, and that by doing so, the Fed will limit damage to the jobs market.

Bottom line? The Fed will hike in March, its first since 2018, and will likely hike at least a couple more times this year, as it walks the highwire of successfully getting inflation back down to its 2% goal while also nurturing job gains as the jobs market heals from the pandemic. In the meantime, the Fed will do the talking and markets will do the walking; the recent sell off in the stock market and higher rates across the curve thus far are consistent with the Fed’s intentions and will look through such as it pursues its goal of tighter financial conditions. Markets are pricing in about 30 basis points of tightening for the Fed’s March 16th meeting, reflecting a roughly one-in-five chance of a 0.50% hike.

Solid GDP data masks weaker details. The US economy grew at a 6.9% annual pace in the fourth quarter of 2021, and at a 5.5 percent annual rate for the full year – the highest rate since 1984. The pace of growth quickened dramatically from Q3’s 2.3% pace, when COVID-19 restrictions in reaction to the Delta variant and severe supply chain disruptions constrained activity. However, a substantial increase in inventories helped flatten the Q4 figure as companies scrambled to restock shelves left depleted by the logistics challenges.

Our take: The Q4 GDP report exceeded expectations on the top line, making it look like the economy was running on all cylinders at the end of 2021. The composition of that blistering growth, however, sounded more like screeching brakes. More than two-thirds of growth in the final quarter was concentrated in inventory investment, as the sudden outbreak of the omicron variant upended growth in consumer spending at year- end. Meanwhile, strong imports in anticipation of robust holiday sales resulted in massive inventory accumulation by businesses. It’s a dynamic that won’t be repeated in Q1 2022.  However, the pace of growth this quarter will remain robust. Even though Omicron infections have dampened consumer spending thus far this year, consumer confidence remains upbeat. With cases having peaked earlier in January, consumer spending will rebound as the quarter progresses, giving the Fed greater confidence to hike interest rates.

Are wage increases putting a 0.50% March Fed hike in play? A notable rise in the wage component of the Employment Cost Index (ECI) – a price gauge that almost convinced Fed Chair Powell to speed up the taper pace last fall – raises the chances of a 0.50% rate hike in March from a remote possibility to something the FOMC will consider.

Total compensation for civilian workers edged up from 3.7% in Q3 2021 to 4.0% in Q4, below the market consensus. The headline figure masks a faster increase in wages and salaries – 4.5% for all civilian workers, and 5.0% for private-sector workers, up from 4.2% and 4.6% in Q3, respectively. The wage data also doesn’t take into account labor shortages caused by the Omicron wave. As virus infections diminish, and employees return to the workforce, we expect that the next ECI reading will likely show an even faster rise in wages.

Our take: The rapid pace of wage growth confirms Powell’s comment at last week’s Fed meeting that the jobs market is “very, very” tight, and will prompt the Fed to boost its inflation forecast further. The dynamic reinforced the Fed’s concerns about a potential wage-price spiral. This further supports expectations of a quarter-point rate-hike in March and puts a 50-basis point hike squarely on the table. It also means the Fed will likely look through the weak, omicron-infected payroll jobs report to come this week (keep reading for more on this).

What to Watch This Week: What will the Fed do in the face of the highest inflation in almost 40 years, and greater upside risks? Hike rates, that’s what. Markets are pricing in close to five, 0.25% hikes this year, after Jerome Powell’s aggressive post-meeting news conference.

Hold on to your horses though, as there are a couple of dynamics in play that could undermine markets expectations. First, the anticipated accession of three, hike-resistant Fed governors is a major source of uncertainty for the Fed’s future policy moves. Sarah Bloom Raskin, Lisa Cook, and Philip Jefferson’s confirmation hearings (Thursday) will expose their positions on the matter. Second, the fortitude of policymakers in continuing their shift toward rate hikes will be tested, with data likely indicating that the jobs market weakened significantly in January (ADP National Employment Report, Wed.; the always important jobs report, Fri.).

We suspect that the Fed will look through the weak jobs numbers, as signals are indicating that the hit to the jobs markets from Omicron is rapidly reversing. Initial jobless claims (Thursday) have been declining since mid-January, and we expect them to continue to fall as companies try to hold on to existing employees amid historic labor shortages. Indeed, JOLTS data, a survey that helps measure job vacancies (due Tuesday) will indicate that job opportunities continue to outnumber unemployed workers by a substantial margin, with a ratio of 1.6 to 1 in November. Even if the jobs data is weaker than expected, they will still likely confirm that the last hurdle for rates liftoff has been met; with the unemployment rate falling to 3.9% in December, it’s below the 4% level that most Fed officials estimate to be sustainable in the long run.

We’ll also get a peak this week into whether inflation pressures are building. Even though labor shortages and supply constraints may be easing, the ISM surveys (manufacturing, Tuesday; services, Thursday) may indicate that that high and rising inflation is alive and well, helping to keep the pressure on the Fed to hike rates and soon.

Big Picture: A March rate hike is a done deal and will be the first of many tightening steps the Fed takes this year to control inflation. Since the December Fed meeting, the jobs market has reached maximum employment – or as close as it will get to it in the short-term – and the Omicron variant has exacerbated existing labor shortages, adding upside risk to inflation and urgency for the Fed to begin the tightening cycle.

While all signs are pointing to successive rate hikes this year, we doubt that the Fed will be able to raise rates more than four times this year. If it does hike five times, as markets currently expect, it will skip a hike in May to announce the runoff of its bond purchases, and November, to avoid impacting the U.S. midterm elections. In the meantime, a key point to watch is whether inflation drops as rapidly between April and June – due to a solid reversal of its root causes – as many forecasters expect. Two potential near-term supply shocks – a major China lockdown and potential strikes at ports along the U.S. West Coast – could easily upend that forecast. 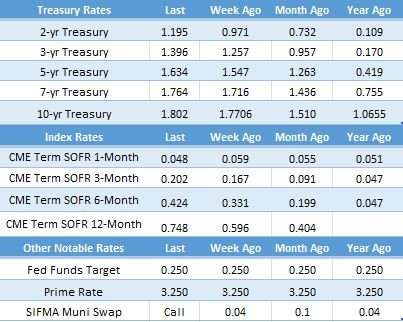 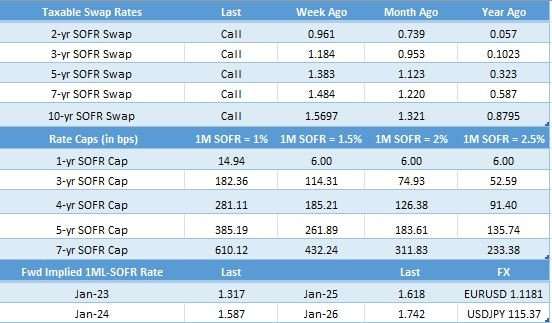 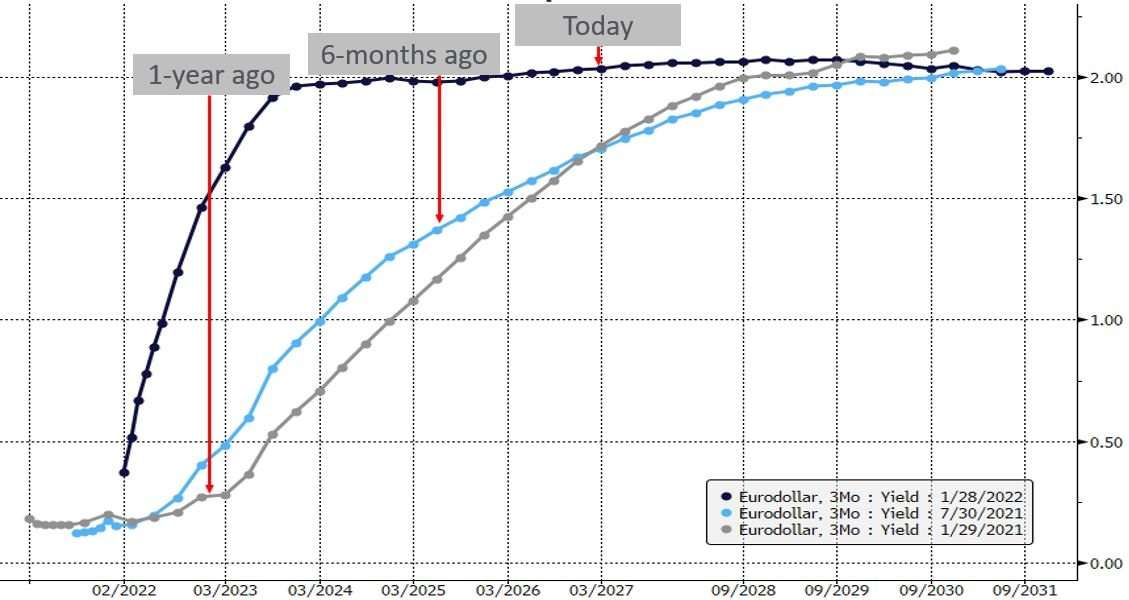 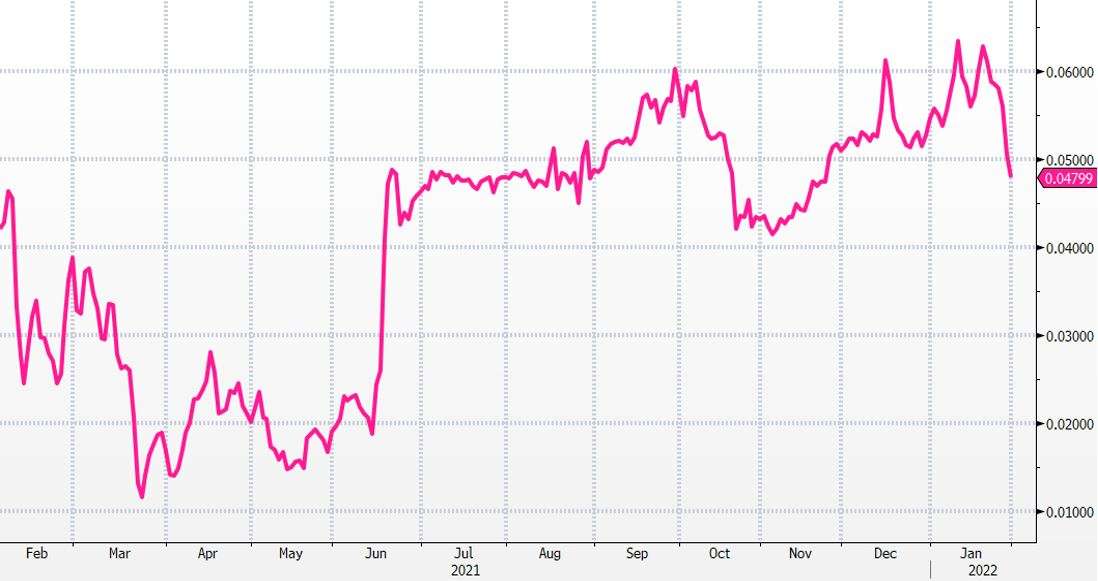 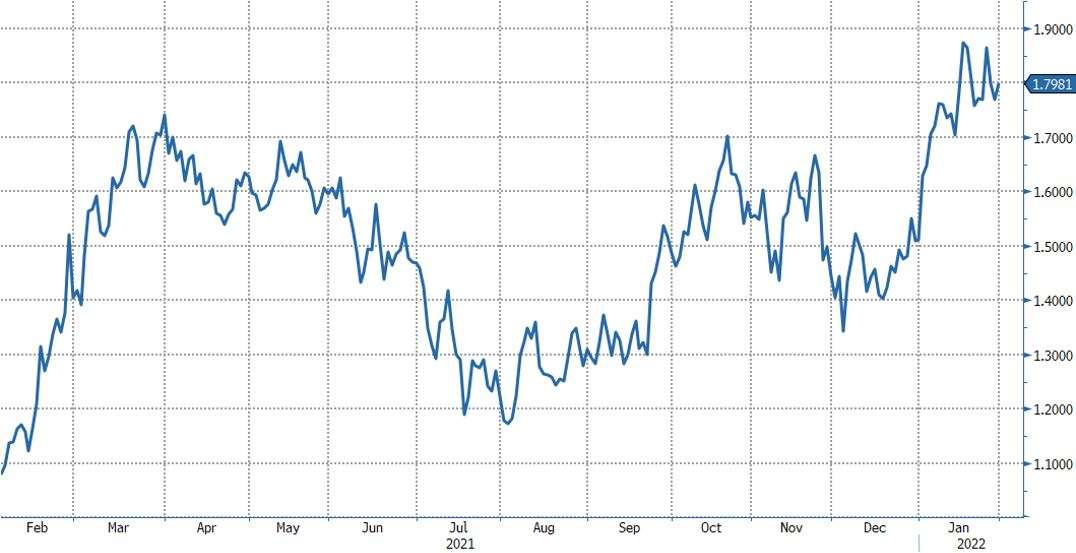 Too Far, Too Fast
Scroll to top