Last Week: Interest rates were mixed, and equities fell amid increasing concerns over global growth and lingering trade tensions. The yield on the US 10-year Treasury note slumped 12 basis points from a week ago, to 2.89%, while 1-month LIBOR rose to 2.40% from 2.37% this time last week. Oil rose slightly to $52.61 as the US Dollar weakened and Gold rose. Treasury yield volatility, as measured by the Chicago Board Options Exchange Treasury Volatility Index (TYVIX), rose to 4.35 from 3.76 last Monday.

The pace of US job growth slowed. US job creation slowed more than anyone expected in November, casting doubt on the need for consecutive Fed rate hikes next year to slow things down. Friday’s jobs report showed that the economy added 155K new jobs in November, well below the 198K expectation, but only slightly lower than the 170K three-month and 206K 2018 monthly average.  The unemployment rate held steady at 3.7%, while wages rose less than expected – just 0.2% – a sign that wage pressures remain muted despite the historically low unemployment rate. The jobs data for October was revised lower. Notable pockets of weakness are developing in the interest-rate sensitive sectors of the economy, specifically construction, automotive and mining.  All told, the jobs report paints a picture of solid job creation through year-end despite the November slump, and that the Fed’s march toward policy normalization is creating a healthy cooling of the economy. It’s important to remember that one month’s worth of data does not make a trend, and while we expect future Fed hikes to slow job growth further, overall job creation through at least the first half of next year will remain strong.

Rate hike pressures receded. Markets have spent a great deal of time lately pricing out multiple Fed rate hike scenarios for next year, and while a 0.25% hike is still expected at the Fed’s December 19 meeting, the outlook beyond that has become murky amid mixed economic data and financial market volatility. Most have scaled back their expectations for rate hikes next year in response. The Fed is expected to take a more “wait and see” approach as US economic performance becomes more mixed, global growth slows and a plunge in oil prices reduces already modest inflation pressures.  For now, we’re expecting the Fed to hike three more times before pausing: 0.25% this month (its a done deal), another 0.25% hike in March and another 0.25% in June or in the fall. The Fed’s communication during its Dec 19 meeting will be a cliffhanger as market pundits will be scouring every word for clues into what the Fed will do next year.

Yield curve inversion sparked US recession fears. Historically, when the spread between short- and long-term Treasury yields has dropped below zero (aka “yield curve inversion”) economic recession has ensued. As such, bond markets generated a lot of anxiety last week as the yield curves for the 2-year/5-year and 3-year/5-year Treasuries inverted for the first time since 2007. The moves prompted some to wonder if a US economic recession is around the corner.  Should you be worried? In short, NO. See the “Take-Away” section below for reasons why.

Trade ceasefire between China and US off to a rocky start. While the US and China agreed to embark on an intensive 90-day negotiation toward coming to a long-term agreement on trade, the situation is tense. President Trump issued a series of tweets suggesting that he’ll hold a hard line in the negotiations, reiterating that he is a firm believer in tariffs. Financial markets tumbled in the wake of the tough talk, even amid China’s signal that it wants a deal. The fly in the Chardonnay now was Canada’s arrest – at the behest of the US Department of Justice – of the CFO of Chinese telecom Huawei. (Who is Huawei, and why should I care you say? Basically, the Apple of China and world’s largest producer of electronic equipment – a big deal) The executive faces extradition to the US on suspicion of using the global banking system to evade US sanctions on Iran. Markets fear the arrest could derail the renewed US-China trade talks and could spark more stock and interest rate volatility. As we’ve been saying for months now, we believe that China will ultimately cave to many US trade demands, and that the issue will linger well into 2019. The question now is how much financial market damage will be inflicted on us all until that day comes.

OPEC working toward production cut. While final details are yet to be worked out, it looks as though OPEC and non-member nations like Russia have settled on a production cut of around 1.2 million barrels per day. That was slightly more than anticipated and sparked a slight rebound in crude prices. Who cares, what does the price of oil have to do with interest rates, right? Wrong. Falling oil prices were once a tailwind for the US economy, but now that we’re the world’s largest producer, falling prices cut both ways. Big swings in capital expenditures in reaction to the price of oil can impact the overall US economy. Oil production’s geographic concentration can also have a significant impact on state and local economies. Specific to interest rates, oil prices have a big impact on measures of headline inflation, and inflation drives bond yields. Given the recent eye-popping declines in oil prices – driven by a supply glut and waning global demand – everyone is guessing how low oil will go, its impact on inflation, and how changes in inflation expectations could alter the Fed’s future rate-setting decisions.

What to Watch This Week: With Federal Reserve officials entering their communications blackout period ahead of their December 19 interest rate decision, economic data will take the spotlight this week.

Data on inflation, retail sales and industrial production for November will take center-stage. Consumer and manufacturing activity will remain strong, supported by the November jobs data which indicated that retailers and delivery companies anticipate a record holiday season, and manufacturers posted solid hours worked. Inflation is another story however, given that plunging energy prices likely dragged consumer and producer prices lower, for now. Friday’s retail sales data should outperform given that falling gasoline prices and wage growth leave more cash in consumers’ wallets.

Overall, most are now coming around to the idea that economic growth is set to slow in 2019, but should remain solid, allowing job creation to continue to push the unemployment rate lower. Inflation is projected to pick up as well, as wages slowly edge higher from their cyclical highs.

Take-Away: Relax – last week’s 2-year/5-year and 3-year/5-year Treasury yield curve inversion doesn’t mean a US recession is around the corner. Here’s why:

1) The most reliable leading indicator for recession is the 3-month/10-year yield spread, because it turns negative much less frequently than others. So much so, that the New York Fed uses this part of the curve to build its recession predictor models. The fact that 3m/10y trades at 46 bps should give you comfort that there’s still some cushion left.

2) During the previous three cycles in 1989, 2000 and 2005, it took four to six months for the 3m/10y curve to turn completely flat after it had reached its current level. The economy fell into recession an average 15 months after that. Thus, if history is any guide, we’ve got some time yet.

4) The fact that markets are pricing for steeper yield curves a year out is an indication that last week’s curve inversions aren’t a signal of looming economic doom. Implied one-year forward Treasury yield curves are suggesting that the 2-year/10-year and 10-year/30-year curves will move toward a nearly flat state – but won’t invert – before steepening by the end of 2019. It’s a sign that the interest rate markets aren’t pricing for a prolonged economic downturn, at least for now. 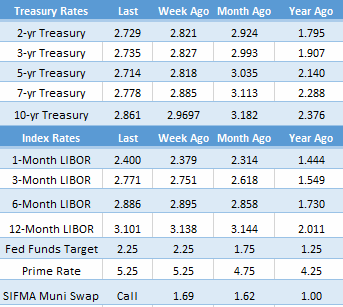 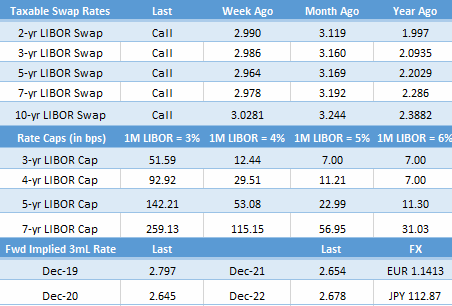 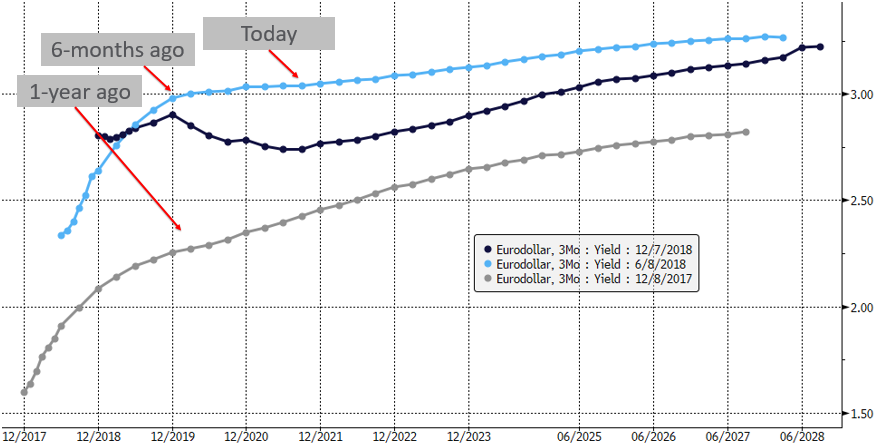