Last Week: The big news of the week was that US payrolls rose slightly less than expected in October, adding 161,000 new jobs, but upward revisions to the prior two months’ data made up for any perceived shortfall in America’s jobs creation engine. Other than the number of new jobs, the most important piece of the data was a 2.7% year-over-year rise in average hourly earnings, the fastest pace since the global financial crisis.

No matter how many new jobs are created, however, if consumers aren’t seeing their wages rise, any bump we see in jobs won’t translate into spending which then won’t translate into sustained growth in the economy. Nevertheless, last Friday’s jobs report ticked all the right boxes. With the Fed already leaning toward a December rate hike, the jobs data solidified the case, barring an exceptional and unexpected election-driven jolt to the financial system. Despite the good news, the market showed little reaction, evidencing that it’s caught like a deer in the headlights of the election outcome and cannot properly price risk and yield outlooks until the outcome is known.

In a widely expected result, the Fed left rates steady at its November meeting last Wednesday but hinted strongly that a hike is likely at the December meeting, stating the case for a rate hike has strengthened but that the Fed has decided to wait for further evidence of continued progress toward its objectives. Between now and the December meeting, Fed officials will have several weeks to digest the December employment report as well as any market reaction to Tuesday’s US presidential election.

Global equities, yields, and oil fell while gold and global volatility jumped as markets moved to safe-havens ahead of what could be a tumultuous week. The 10-year Treasury fell to 1.7762% from 1.8469% the week prior. 1-month LIBOR traded slightly higher to .5353% from .5337% the week prior.

This Week: It’s all about the election.  Regardless of a handful of scheduled second-tier economic data releases and planned Fed official speeches, no one cares about much else. The first results should be reported as polls close in the early evening, however, given the tightness of the race, the election outcome may not be determined until the early hours Wednesday or possibly days later.

Take Away: Last week’s robust jobs data showed trend-like hiring gains and mildly intensifying wage pressures – the winning combination the Fed is looking for to justify a hike in December. As long as the US election passes without a BREXIT-like market swoon, a December hike is in the bag. We’ll be watching for any post-election commentary from the Fed implying otherwise, and we doubt we’ll hear it.

Recent polls have tended to suggest Clinton back to a narrow 2-3 point lead, and the electoral college arithmetic tends to favor Clinton, but given the scale of the potential shock of a Trump win, things are still too close for market comfort. Odds are sitting at around 11/4 or 5/2 right now. Before the market jolting BREXIT vote back in June, similar odds of 3-1 were available for “leave”, thus we’re in the same ballpark on a 50-50 outcome heading into this major event.

Immediate post-election market reaction to a shock Trump win would likely see the 10-year Treasury spike down to the 1.50% Aug-Sep base. On a Clinton win, the initial move would be higher, near the 1.88% yield highs seen before the recent FBI investigation news. Ultimately, we’d likely see markets push close to 2% on this `all-clear` scenario, but only if equities fully reversed their recent declines. 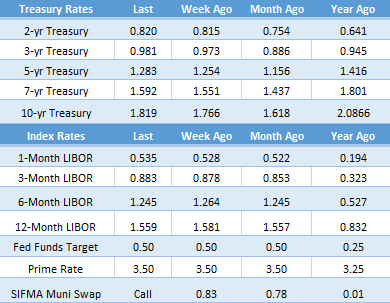 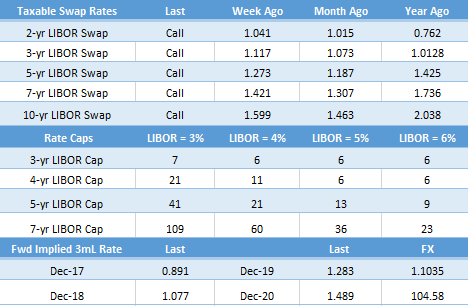 LIBOR Futures (where the market expects 3-month LIBOR to trade in the future):

Trumpflation on the Horizon
Scroll to top