Last Week: The fixed income markets shrugged off last week’s political fireworks, both foreign and domestic. Interest rates rose slightly while equities posted little net change on the week despite the much-hyped “Super Thursday” – filled with a European Central Bank interest rate decision, testimony from ex-FBI director Comey and a surprise result from the general election in the UK – turned out to be mostly a dud. The yield on the US 10-year Treasury note rose three basis points to 2.20% while 1-month LIBOR continued its slow and steady climb higher to 1.1281% from 1.0840% the week prior.  Oil and Gold fell, while the US dollar traded mostly flat. Market volatility, as measured by the Chicago Board Options Exchange Volatility Index (VIX), remained historically muted, virtually unchanged at 10.

UK Prime Minister Theresa May severely weakened in UK vote.  In a gambit to improve her Brexit bargaining position by calling a snap election that did exactly the opposite, May’s political party lost its outright majority, dramatically increasing the uncertainty around the Brexit process. Early indications are that May’s failure to secure a larger parliamentary majority undermines the case for a “hard” Brexit, which the Tories campaigned for. A softer Brexit is seen as less disruptive to UK business interests. Any added BREXIT uncertainty will cause the Fed to hesitate in hiking as much as it might otherwise.

Eurozone economy leads the pack. Purchasing managers’ indices – an indicator of economic health from the manufacturing sector –  released this week show that the eurozone continues to outperform other developed economies, including the US. The eurozone composite PMI, which measures both manufacturing and services, stood at 56.8, unchanged from April. Meanwhile, the United States clocked in at 53.6 and the UK at 56.7, just below April’s 56.8 three-year high. Japan’s composite PMI registered 52.6 and China’s 51.5.

ECB drops rate-cut reference. Adding to the growing queue of Central Banks that are finally stepping away from the idea of more rate cuts, the European Central Bank announced that the bank is dropping its bias toward cutting interest rates, but it retained its bias toward increasing quantitative easing, if necessary. The bank raised its growth forecast while at the same time cutting its inflation outlook.

This Week: The Fed will hike rates by 0.25% this Wednesday. It’s a sure-thing. The smart money will focus on this week’s release of retail sales and consumer inflation data, however, as they’ll provide signals on what the Fed will do for the rest of the year. Any talk about future hikes and reducing the Fed’s massive balance sheet is interesting no doubt, but none of it will happen unless both consumer spending and core inflation rebound.

Q1 GDP was recently revised higher to show that the US economy wasn’t completely in the ditch as once thought, and, so far, the much anticipated rebound Q2 is shaping up to be less than expected. Freely spending, confident consumers will be the driving force of any economic rebound this year, and this week’s retail sales for May – set for release on Wednesday – should provide significant clarity on how we’re faring.

Take-Away: Despite the Fed hike, long-term interest rates, 10-years and beyond, will likely see little reaction from the Fed’s action, as markets fully expect a hike and the 10-year Treasury recently bounced off it’s 2.13% support. The short end of the rate curve is another story, possibly posting increased volatility from any explicit, post-meeting hawkish comments from Fed Chair Yellen.

In the big picture, we still believe we’ll see only one more hike this year, not two as forecasted by many market analysts, as diminishing expectations for economic reform bleed into a paring of consumer and business optimism. 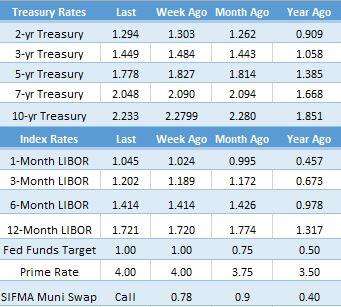 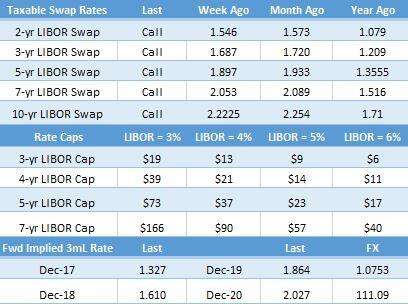