Dizzying Week on the Rate Front 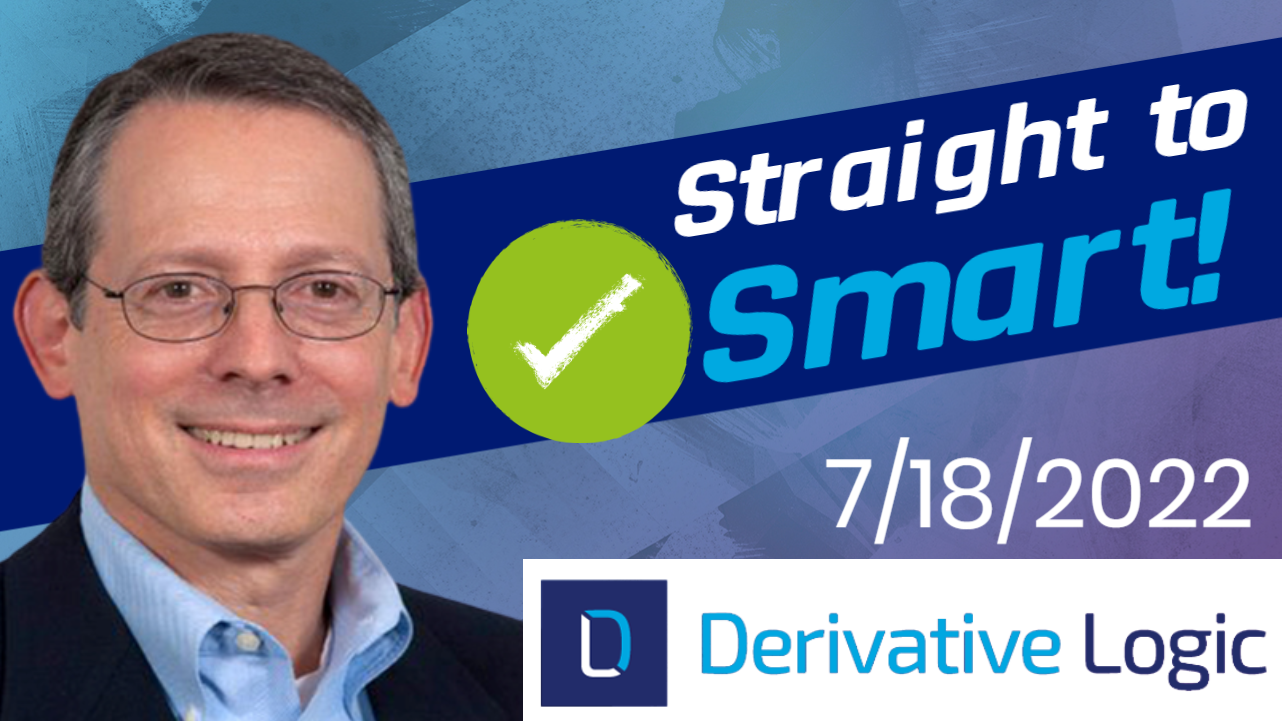 What You Missed: Short-term U.S. interest rates rose forcefully, and long-term rates fell decisively following the release of June’s sizzling 9.1% YoY U.S. CPI outcome.  Interest rate movement remains the by-product of the market’s assessment of inflation realities pitted against shifting recession fears.  While volatility on interest rate options remained high, it eased a bit from the early July surge.  Many customers looking to replace required interest rate caps in the near-future are concerned about rising premium costs brought about by higher volatility and the shifting curve.  We provide cost effective strategies to help mitigate rate risk so please contact us for specifics.

While inflation and speculation over how much the Fed will raise the Fed funds rate remain the main focus, peripheral market activity has gained importance as a potential influencer for rates.  The U.S. dollar strengthened for a third straight week, establishing parity with the euro while the S&P 500 stock index fell only modestly, despite June’s higher than expected CPI.  Gasoline prices fell further, setting up for a less nail-biting headline CPI report next month.

Numerous U.S. economic data releases last week, covering various elements of the May to early July economy were inconclusive at signaling an impending recession.  The first look at Q2 U.S. GDP will come July 28th, the day after the FOMC rate decision. The current consensus for Q2 real GDP is ~ 1.0% QoQ annualized growth, an improvement from Q1’s -1.6% negative print.

The U.S. Treasury curve gyrated last week after the release of June’s hot CPI.  Short-term rates surged while longer-term rates fell as the market repriced for the possibility of more aggressive Fed rate hikes and a weaker U.S. economy.  The week ended with 3-month T-bill rates up 40 bps, the biggest move by maturity as the front end repriced further to a summer of Fed tightening.  The 2-yr yield rose just 1.5 bps last week while the 10-yr yield fell 16.5 bps. We now have notable inversion with the 2-yr exceeding the 10-yr yield by ~ 20 bps.  That inversion was even deeper after Wednesday’s CPI report.  Rates past 10 years fell the most last week, aided by a strong 30-yr bond auction on Wednesday.

Credit markets are looking ahead defensively

As the intensifying spike in rates puts a greater focus on the potential for recession, concerns over corporate credit quality have grown.  Non-investment grade credit spreads have been widening since the Fed’s inflation pivot last November from very tight levels that benefitted borrowers.  By mid-June, spreads had widened to levels that were less skewed to the issuance side.  Following the May CPI print, spreads have widened further.  This past week, some notable Q2 bank earnings were adversely impacted by increases in loan loss reserves as banks look ahead to a more challenging operating environment.

The CLO market, structured with leveraged loans (non-investment grade), has been recently hampered by concerns over potential downgrades and defaults. This important funding mechanism serves as a critical source of liquidity for many borrowers and non-bank lenders.  At this juncture, credit concerns far outpace actual defaults and downgrades, but deal flow has slowed as investors get increasingly defensive. The potential danger here is if the CLO market cannot function amid defensive posturing by investors, it could create its own adverse destiny for borrowers if liquidity dries up.  While by no means at crisis levels, this market should be watched closely, and we will update as conditions change.

With the Fed acting and talking aggressively against the hottest inflation in over 40 years, the interest rate differentials between the U.S. and both the eurozone and Japan continue to be monumental.  3-month Term SOFR (CME) increased 31 bps last week to 2.55%, up 50 bps just since June 28th.  While rates have moved up in the eurozone recently and barely in Japan, they remain near rock bottom.  Three month rates in the eurozone (Euribor) and in Japan (ICE Yen Libor) ended Friday at just 7 bps and -1.5 bps respectively.  The rate differential clearly favors the U.S. dollar (USD) and speaks to how forceful capital flows have shifted in favor of USD. Last week, the euro reached parity against the U.S. dollar for the first time in 20 years and the Japanese yen briefly fell to JPY 139 intraday, a 24-year low against the USD.

Why this matters for U.S. interest rates: The USD’s rise has been mostly one way and that can lead to eventual instability. The volatility is likely to come from both eventual policy tightening by the ECB and maybe even the BoJ after the Fed has moved through most of its tightening by yearend.  The enormous currency market can move with lightning speed so there’s potential for serious volatility.

Furthermore, since the beginning of this year, total foreign demand for U.S. Treasuries (USTs) have fallen noticeably, in both absolute and percentage terms of outstanding debt.  Changes in interest rate differentials, USD strength, and currency risk have played a part.  Japan’s holdings alone (the largest foreign holder of USTs) have dropped $85 billion so far this year (thru April) to $1.22 trillion.  The Treasury will report on May’s holdings today, July 18th.

June’s U.S. CPI outcome was unsettling as it showed inflation accelerating further despite 150 bps of cumulative Fed rate increases.  The headline CPI climbed 9.1% YoY last month for the largest increase since 1981.  Core prices, excluding the effects of food and energy, rose 5.9% from a year earlier in June and were down fractionally from 6.0% in May.

A monthly rise of 1.3% in June’s headline CPI was the most so far in this post covid inflation environment, setting off alarms, up from 1.0% in May and 0.3% in April.  Upward price pressures were broad and the monthly core CPI rose 0.7% last month, up from 0.6% in May, the most this year.  Price increases for gasoline, food, and shelter were the largest contributors.  The energy index alone rose 7.5% over the month contributing to almost half the headline increase with gasoline up 11.2%.

Gasoline to the rescue?

Retail gasoline prices fell an additional 15 cents last week to $4.55/gal, down 47 cents from the June 13 peak of $5.02.  Prices averaged $4.93/gal last month and $4.70/gal this month so far … if this decline holds (or intensifies) through the end of July, next month’s CPI release should soften.  For interest rates, any signs of moderating inflation pressures will potentially ease rate hike expectations and curb volatility.

The U.S. Producer Price Index (PPI) rose 11.3% YoY last month and 1.1% for June, exceeding consensus expectations.  Energy prices were a big component of the June advance.  The core PPI, ex-food and energy, rose 0.4% MoM and 8.2% YoY, the least since Nov.  This may finally be peaking as moderating prices have been visible in food, crude oil and raw materials.  Earlier stage of production price pressures for goods and services (not final out the door prices) have already peaked.  Import prices increased a less than expected 0.2% MoM in June while compared to a year ago rose 10.7%.  The annual core figure, excluding food and energy, rose 4.4%.

The NFIB index of U.S. small business optimism, fell in June to its lowest since Jan 2013 while falling below the covid low of April 2020 (then reached in freefall).  The index has been in decline all year amid rising inflation and labor shortages.  U. of Michigan’s preliminary consumer sentiment index rose slightly in July, after Q2’s decline, for the first rise since April.  While the index remains close to its lowest level ever (June), it shows that lower gasoline prices can help improve the overall mood.  The long-term inflation expectations component of the index fell to a one year low of 2.8% from 3.1% in June, a calming data point for the Fed and the bond market.

Weekly Jobless claims for unemployment insurance rose to 244k, the highest since Nov, exceeding expectations.  The more trending 4-week moving avg rose to 235.8k, highest since early December.  Claims are on the rise; the average for 2021 was 222.2k. Higher claims typically appear before unemployment rises and therefore, more attention should be paid to this high-frequency data point (every Thursday).  If the U.S. unemployment rate were to start rising, it would influence the Fed’s rate tightening agenda.

Retail sales rose 1% in June, the best showing for Q2, mostly in line with expectations.  This outcome, however, is in nominal terms and, adjusted for inflation, real spending fell last month. The core data control group, which excludes items such as autos, food services, building materials and gasoline, increased 0.8%, the largest gain since January.

More on the store shelves but it’s happening slowly

Fed’s policy meeting is next week.  Will the Fed raise its funds target by 100 bps on July 27th?  No.

What to Watch This Week: The FOMC’s pre-meeting blackout period has begun.  Senior Fed officials will not be commenting publicly on monetary policy until the July 27 FOMC decision.

A relatively light data calendar is on tap for this week and the key focus will turn to June housing data and Q2 corporate earnings.  We look to see how profit margins are holding up … this will be a key insight into determining corporate pricing power and its role in potential inflation and rate risk.

Housing data Monday – Wednesday.  On Monday, the National Association of Home Builders will report on its July housing market index.  The main index, comprised of current and expected future sales (next 6 months) and regional foot traffic, has been in a consecutive monthly downdraft throughout 2022.  A further decline in the index is anticipated for the July release.  On Tuesday, the Census Bureau will report on June housing starts and building permits.  Some improvement in starts, relative to May, is anticipated although building permits are expected to decline.  On Wednesday, the National Association of Realtors will report on existing home sales for June.  From our vantage point, the key focal point should be on median home prices.  They reached a record high of $408k in May and have been in a general updraft since Q2 2020 (covid-effect).  Some moderation is desperately needed here with broad implications for the Fed and interest rates.

Big Picture: With the Fed meeting outcome a week and a half out and a relatively light economic data calendar this week, markets may fixate on Q2 corporate earnings releases, the U.S. dollar, covid’s latest Omicron BA.5 variant, and signs that the war on Ukraine may be intensifying as it approaches its 5-month mark.  With covid and war potentially gathering new momentum, new supply shocks are still a possibility making it very tough to anticipate a return to normalcy anytime soon. 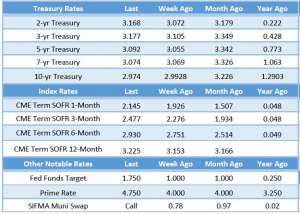 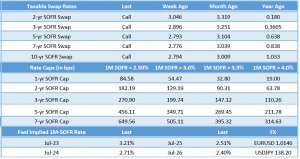 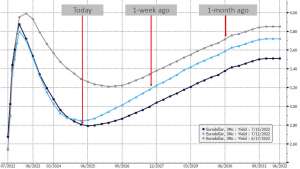 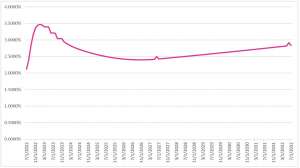 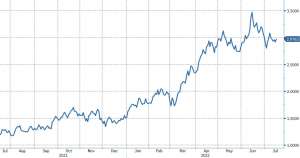 Rates Jittery Ahead Of FOMC
Scroll to top