What You Missed: Long-term interest rates rose while equities firmed near record highs amid signs that the spread of the Delta variant of the coronavirus may have peaked in some hard-hit parts of the US and on hints of a near-term taper by the Fed’s Chair Powell. The yield on the benchmark 10-year US Treasury note rose 7 basis points to 1.32% while short-term rates, like 1-month LIBOR, BSBY and SOFR, remained flat near record lows. The price of a barrel of West Texas Intermediate crude oil rose over $6 to $69.00 as a Hurricane Ida brewed in the Gulf of Mexico and 10%+ of US capacity was taken offline ahead of landfall. Elsewhere, Treasury yield volatility, a key driver of the cost of rate caps and swaptions, was mostly unchanged.

Fed’s Powell signaled tapering of bond buys this year. Chair Powell implied that the central bank could begin tapering the pace of its bond purchases before the end of this year. While the Fed has observed further healing in the jobs market in recent months (one of its priorities), he cautioned that the Delta variant is a wild card. The Fed chair reiterated that he remains confident that current inflation is truly “transitory” and that historical efforts to offset temporary inflation fluctuations may have done more harm than good. (Are you new to the taper conversation? Get up to speed HERE and HERE.)

Our take: In our minds, Chair Powell’s comments all but confirmed our expected timing of a taper: The Fed will outline a plan for tapering at its November policy meeting, and will begin tapering actions in December, at a snail’s pace, assuming economic momentum and inflation readings cooperate. In the meantime, the Fed will drop more hints at its September 20th policy meeting.

Powell’s comments last week – watched by financial markets globally because the timing, pace and degree of tapering will impact the value of most financial assets – took stock of the economy’s rapid progress and solid outlook and laid out reasons not to overreact to current high inflation readings. It’s all part of the Fed’s careful process of mitigating financial market surprises, which matters far more than the precise details of its tapering plans.

Looking ahead, given Powell’s re-confirmation of the Fed’s “transitory” view of inflation, it’s focus going forward will be job creation. It seems that the Fed is taking a glass half-empty view on the jobs market; citing that employment is still about roughly six million jobs below its pre-pandemic level, with most of the shortfall residing in the depressed service sector of the economy. In addition, while wages are rising, the gains aren’t swift enough to spark a worry of broad inflation. In that vein, monthly jobs data through the end of the year will be front and center in guessing the Fed’s plans for the future.

As for interest rate hikes, the Fed Chair went out of his way to divorce tapering from rate hikes in the minds of markets. As such, don’t read into the tapering discussion that the Fed is on board with hiking rates anytime soon. After everything we heard last week, we maintain our view that the first hike will happen in 2023. If all occurs as we expect through year-end, we anticipate that the yield curve will steepen; short-term interest rates will remain anchored near zero, and long-term rates – like the 10-year Treasury yield – will drift higher, wrapping the year somewhere near 1.50%, since the Fed’s tapering activity will be broadly viewed as an indication that the economy is firmly on the road to full recovery.

America’s service sector slowed in August, confirming the bumpy road ahead toward economic recovery. Activity in the giant services sector, which alone accounts for about 70% of America’s total economic output, slowed sharply in August. The Purchasing Manager’s Index (“PMI”) slipped to 55.2 from 59.9 in July. The combination of the Delta variant’s spread and ongoing supply chain woes weighed on activity.

Why it’s important: The PMI data, coupled with  reports from recent weeks which showed a slowing of consumer spending, imply that 1) America’s economic growth over the current and coming quarters will be slower than most expect, and 2) many will soon need to tone down their rosy forecasts of the speed of the economic recovery. The dynamic plays perfectly into the Fed’s recent communications about tapering and rate hikes: while the overall economic picture is indeed improving, a speedy reversal of the Fed’s stimulus measures would be a mistake. In the meantime, effects of the Delta variant are just beginning to be seen in the data and could yield some negative surprises. It’s a recipe for long-term interest rates to stay low for the foreseeable future.

Fed’s preferred inflation measure eased in July. According to a US Commerce Department report, the US core personal consumption expenditures price index rose 0.3% in July, down from June’s 0.5% pace. The inflation gauge rose 3.6% year over year, the highest reading in about 30 years, but at the same annual pace as in June. The report also stated that personal income rose a robust 1.1% last month, well above expectations of a 0.2% advance.

Biden held firm on Afghan withdrawal date. President Biden told G7 allies that the US will stick to its self-imposed August 31st withdrawal date from Afghanistan even if that means leaving behind US citizens and Afghan holders of special visas.  Left dismayed, most other G7 partners pushed the White House to extend the deadline but began wrapping up their evacuation efforts after Biden stood his ground. The already chaotic situation in Kabul, Afghanistan’s capital, deteriorated further last Thursday when a terrorist attack mounted by Taliban rival ISIS-K near an entrance to the city’s airport killed scores, including 13 US troops.

Our take: While it’s a fluid and unpredictable situation, long-term interest rates could fall temporarily should the Afghanistan situation deteriorate rapidly, as investors seek the safety of US Treasury bonds amid the chaos. We experienced a whiff of it last Thursday, as rate cap pricing spiked higher and swap rates moved lower suddenly as news of the bombing rippled across the newswires.

US home sales rose in July. Sales of existing homes in the United States rose 2% in July compared with the prior month, while new home sales rose 1%. Realtors noted that inventories of unsold homes have begun to rise, a shift from earlier in the pandemic when inventories were tight. The median sales price of an existing home stands at $359,900, 17.8% above July 2020 levels.

Variant’s spread further tangled supply chains. Outbreaks of the Delta variant of the coronavirus in Asian countries with low vaccination levels, such as Vietnam, Indonesia, and Thailand, are threatening to further snarl global supply chains. More than 30% of US shoes are produced in Vietnam, according to the Wall Street Journal, illustrating the importance of remedying global supply chain problems and highlighting the potential for inflation amid tight supplies in multiple categories.

What to Watch this Week: The next clue as to whether the Fed’s view on tapering is correct will come via August’s jobs report (Friday). The data will also serve as a critical test of our view – that the Fed will tease a taper at its September meeting, formally announce its taper plans November, and begin tapering in earnest in December.

Pretty much every commentator out there expects that the pace of hiring slowed in August from July’s torrid 943k pace, given the still-slow supply chains and a scaling back of spending on both the business and consumer fronts. As such, we estimate that America’s jobs engine produced 700k new jobs in August and that the unemployment rate fell to 5.2% in August from July’s 5.4%.  In addition, we expect similar results in September and October.

If our forecasts are correct, the data will give the Fed comfort to look past near-term economic wobbles stemming from the Delta variant and proceed toward pulling the trigger on a modest taper in December.

Other important data released this week will shed light on the state of supply chains, consumer’s confidence in the future and their subsequent inclination to spend – a critical component to the recovery, given that consumer spending makes up about 70% of America’s economic activity. Clues on this front will come from August’s ISM manufacturing index and vehicle sales (both Wednesday), consumer confidence (Tuesday), and the ISM services index (Friday).

Big Picture: Given the overt fixation of late on the Fed’s tapering plans, and the financial media’s obsessive coverage of the subject, we’d like to remind you that the finer details of the timing, pace and substance of the Fed’s taper really don’t matter that much. What does matter is that the taper kicks off when economic conditions are right, and with minimal surprises for the financial markets.

Given that, some important questions should be asked: What if the Fed gets it wrong? What would happen to economic growth, inflation, stock prices and interest rates if the size or timing of the Fed taper takes markets by surprise?

Don’t worry, we’re not going to bore you with a long, drawn-out analysis. Just know that if the Fed gets the timing of tapering wrong – easing off the stimulus throttle too early and in a way that catches markets off guard – the costs would be high. Consumer spending, business activity, and equity prices would take a hit. US economic growth in 2022 would be about 1% lower, and 10-year Treasury yields would be somewhere around 30 basis points higher.  The Fed understands this risk.  Thus, we continue to believe that they will take a very cautious approach to their tapering activity. 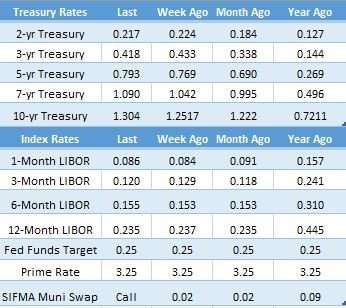 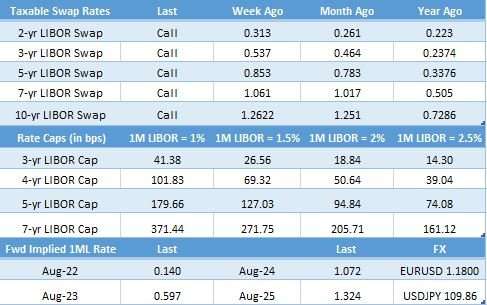 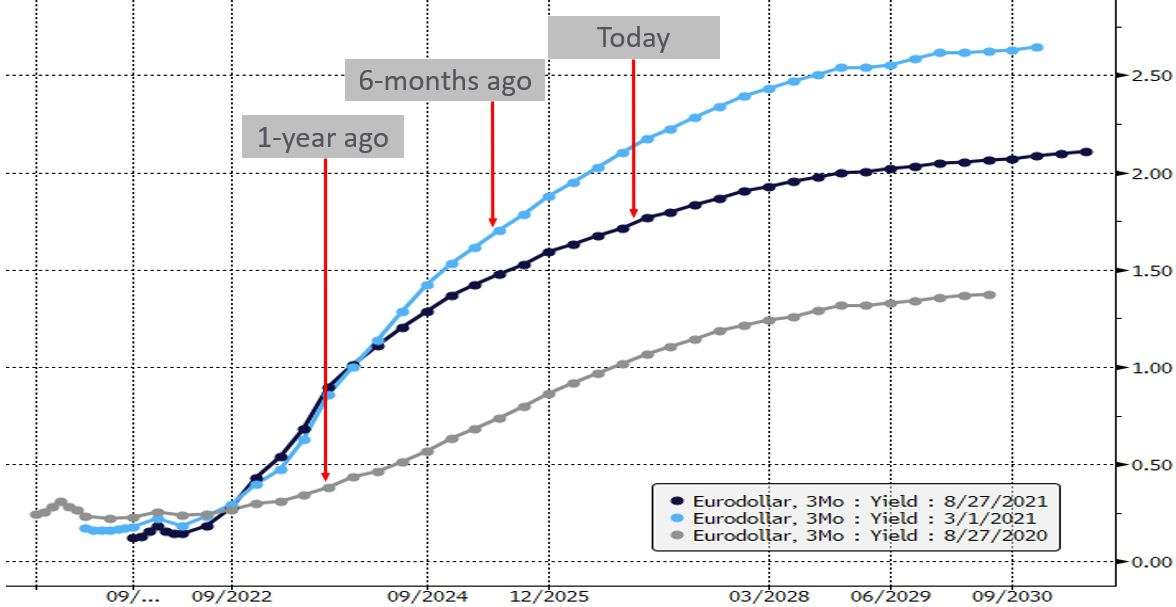 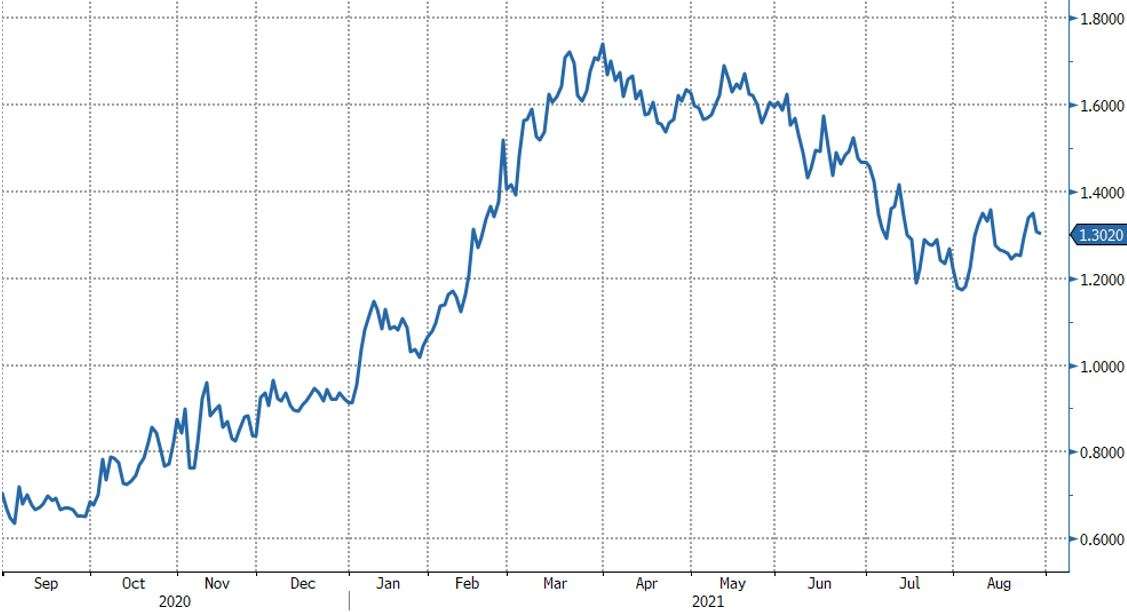 2021 Derivative Logic, Inc. LIBOR Transition Update – September 2021
We use cookies to give you the best web experience. If you continue to use this site it is deemed you consent to this site's use of cookies.OkPrivacy policy
Scroll to top