Last Week: Interest rates were mixed, and global equities were higher on the week amid hopes that the coronavirus pandemic may be nearing a peak. The yield on the US 10-year Treasury note rose 15 basis points to 0.73%, while 1-month LIBOR fell 10 basis points to 0.81%. The price of a barrel of crude oil fell $1.50 to $25.50, as the US Dollar weakened, and Gold strengthened. Treasury yield volatility rose slightly to 6.59 from 6.23 this time last week.

Fed threw more aid toward MainStreet. Defying the skeptics who doubted the Federal Reserve could do more, several new measures were put in place to ease funding strains and to support households, business, and state and local governments. The Fed announced an array of programs with total lending power of $2.3 trillion dollars and announced it would support new debt issuance of companies that have recently lost investment-grade credit ratings in addition to buying a limited amount of high-yield exchange traded funds. The constraints of the Fed’s zero lower- bound for interest rates may have changed the configuration of the Fed’s additional stimulus efforts, but it has clearly not limited the heft of Fed action. While the Fed’s additional actions last week will certainly help support the economy, most of the efforts work toward stabilizing bond markets and keeping them liquid, which, in turn, help to keep the credit flowing. While it’s doing its best to be creative and stands ready to modify or expand existing programs if needed, the Fed is clearly now relying on Congress to step up on the fiscal side to finish the job. Politicians need to act in turn.

Claims for US unemployment insurance remain astronomical and will get worse. An additional 6.6 million Americans applied for state unemployment benefits, adding to the nose bleeding 6.9 million that applied the prior week. That brings the three-week total to 16.8 million. For context, prior to the social distancing efforts aimed at slowing the spread of the coronavirus, weekly claims averaged just over 200K per week. At these levels, the unemployment rate will head toward 15% in April, and possibly higher later in the quarter unless the tsunami of unemployment filings starts to subside.

The increase in statewide shelter-in-place orders and ongoing delays in the roll-out of the Small Business Administration’s loan-to-grant program to support continued employment (we’re still waiting for our check FYI) mean that we’ll see more weeks of eye-watering jobless claims as businesses trim costs to stay afloat. Further, we expect job losses in April to come in at a staggering 20 million based on jobless claims filings. That’s 30 TIMES LARGER than the 701k decline in March. For color, the largest increases in jobless claims for jobless claims thus far were in California, New York, Michigan, Florida, Georgia, Texas and New Jersey. Some states reported decreases in claims, with the largest in Nevada, Rhode Island and Minnesota. Currently, the number of Americans instructed to stay at home accounts for a stunning 95% of the population.

Coronavirus’s Catch-22.  The best description we’ve heard so far to resolve the situation we’re all suffering from is this: The problem can be solved by holding your head underwater but stops being solved when you lift your head out. Meaning, how can any society lift its stay-at-home order if there’s no vaccine and most people remain uninfected? The lockdown cure will soon be worse than the disease, imposing social destruction beyond compare. Here’s what comes next: Constant and widespread testing to quarantine new cases will allow us to “flatten the curve” while lifting the stay-at-home orders on a rolling basis will get the virus’s boot off the throat of commerce. Many will still voluntarily “social-distance”, but we’ll largely all accept what nature gives us as the epidemic burns itself out before a vaccine is available, eventually getting back to business by the end of May.

What to Watch this Week: While we’ve been focused on weekly jobless claims data for a reliable, timely indicator of economic distress, the coming week will deliver a harvest of sour economic data.

Given consumers’ critical role in propelling economic growth over the last several decades, March retail sales (Wednesday) will be the most important data point and will show a decline sharp enough to push the broader economy into contraction in Q1. Elsewhere, data from America’s factory sector, including March industrial production (also Wednesday) and April regional manufacturing surveys for the New York and Philadelphia Fed districts (Thursday), will provide further detail on just how bad it is. All told, the data is likely to show the steepest economic contraction in a generation.

On the bright side, March Housing Starts (Thursday) shouldn’t be as shockingly negative as other data, given that construction sites remained open at the beginning of the month and aggregate hours worked in the industry only edged down 0.1%. Nevertheless, the housing sector won’t be spared from the downturn as unemployment surges and incomes drop. However, ultra-low interest rates will allow the housing sector to recover rapidly – but only when the current crisis is over.

Of course, the newly popular weekly jobless claims data (Thursday) will remain front and center, as markets look for any sign that the wave of unemployment is beginning to crest. We expect filings for unemployment benefits will run at a record high for a fourth week in a row, topping six million+, as states catch-up in processing applications amid an inflow of new layoffs.

Big Picture: The Fed and other central banks efforts of creating stability in markets are helping rates volatility and keeping a lid on Treasury yields. There is little reason for rates to rise appreciably anytime soon, especially given their lack of response late last week to signs that the virus’ spread may be slowing in America’s hotspots, as the news propelled other assets higher, like stocks.

Looking further out, while the Fed’s bazooka of stimulus will likely anchor short term rates, like the 2, 3, and 5-year Treasury yield, it’s entirely possible that the 10-year Treasury yield could visit the 0.25% realm if the coronavirus-related quarantines, social distancing and medical vaccine advances prove effective. Regardless, the whipsaw moves in yields is likely over for the foreseeable future as we head toward a much less exciting path for rates, where the 10-year Treasury yield is stuck in a 0.40%-0.90% range.  Any move above 1.00% over the next month would require a firm schedule for re-opening the economy and real progress in battling the virus. In the meantime, markets will follow a basic, time-tested rule when confronted with a counterforce, the Fed, who has unlimited resources and resolve to keep rates low: “Don’t fight the Fed.” 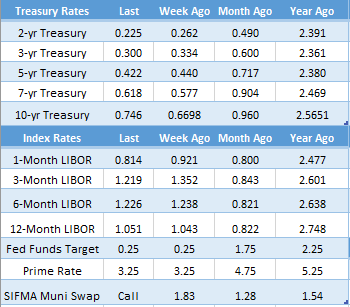 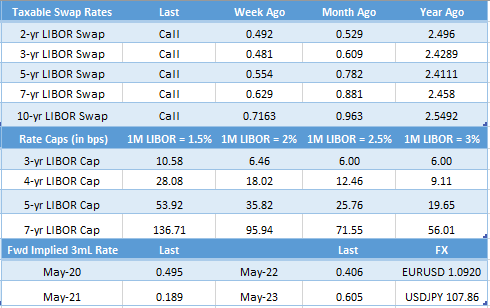 Testing is the Cure to Our Economic Ills
Scroll to top