What You Missed: Short and long-term interest rates rose, and equities were little changed on the week as markets solidified their Fed rate hike expectations. The yield on the US 10-year Treasury note rose 10 basis points to 2.93%, while short-term rates, like the 2-year Treasury yield and 1-month Term SOFR, rose nine and ten basis points respectively to 2.71% and 0.77%. Elsewhere, the price of a barrel of West Texas Intermediate crude oil rose $4.75 to $106.60 on the week, and the US Dollar strengthened, and Gold traded flat on the week. Treasury yield volatility, a key driver of the cost of rate caps and other option-based interest rates hedges, fell through the week but remained near two-year highs.

US economy shrank in Q1. Economists expected the US economy to grow at a slower pace in the first quarter than the blazing 6.9 percent annualized rate seen at the end of 2021, but the 1.4 percent contraction in economic growth, released last Thursday, surprised almost everyone. While consumer spending – responsible for nearly 70 percent of economic output –  increased by 2.7 percent, the overall gross domestic product (GDP) figure was negative due to America’s large trade deficit in Q1, decreased government spending, and a steep decline in inventory investment by businesses.

Our take: Wait a minute; the Fed has only hiked 0.25% and the economy is already shrinking? That’s right, on the surface, but dig deeper into the GDP data and you’ll see that the economy is stronger than the headline data implies, giving the Fed confidence to continue down its well-broadcasted tightening path.

The 1.4% decline in GDP in Q1 – the first contraction since the pandemic raged in the first half of 2020 – was driven entirely by a massive negative contribution from net trade and a slower buildup in business inventories. Companies have found it extremely difficult to forecast consumer and business demand in order to manage inventories due to unexpected viral outbreaks and supply-chain disruptions, resulting in substantial trade imbalances and inventory accumulation. Let’s dig into these a bit to see what it really means for interest rates.

On the business inventories front, final sales to domestic purchasers (that’s GDP less inventories and trade) were much higher than the headline GDP implies, growing by 2.6 percent in Q1 vs. 1.7 percent in Q4 2021. This indicates that consumer demand and business investment growth were strong, suggesting that the economy’s underlying strength remains intact. The inventory slump in Q1 is a payback of sorts for the red-hot inventory accumulation seen in Q4 2021, which was a major contributor for the robust 6.9% GDP growth that quarter. Rapid inventory buildup like that can only last if overall growth is accelerating. With GDP growth set to slow this year, the inventory build-up also has moderated, albeit to a still-sizable level.

On the trade front, the significant drag on growth from net cross-border trade – that’s a measure of how much America imported versus what it exported in Q1 –  resulted from the combination of weak exports amid a global slowdown, combined with robust imports due to strength in both domestic demand and the US dollar. It’s a dynamic that will prove temporary as trade flows normalize thanks to the world economy continuing to open post-COVID.  Going into the second quarter, consumer and business spending were picking up steam, which we expect will sustain above trend economic growth for the year.

All told, the negative print in Q1 GDP marks the slowest rate of economic growth since the pandemic driven recession, but the economy is still on track to grow about 2.5% for 2022, close to its pre-pandemic pace of 2.6% in 2019. The billion-dollar question now: Will the economy be strong enough to weather a series of 0.50 percent Fed rate hikes that financial markets are forecasting without tipping into a prolonged recession? Keep reading for more on that topic.

Consumer spending continues to support growth. Consumer spending rose 1.1% in March, significantly above the consensus estimate of 0.6%, while personal income rose 0.5%. The data showed that consumers continued to scale back on their purchases of goods versus services. Durable-goods spending declined as auto sales fell; surging prices also masked softening demand for non-durable goods. Services spending increased at a solid clip, accelerating throughout Q1 (1.1 percent in March vs. 0.8 percent in February and January). Additionally, February’s modest gain in consumer spending was revised higher, from 0.2 percent to 0.6 percent.

Our take: Again, being the sole driver of roughly 70% of US economic output, the monthly consumer spending data is a key barometer for gauging the health of the overall economy, and by extension, the direction of interest rates.

As the pandemic fades, consumers will increasingly pay for experiences rather than household goods, continuing the acceleration in spending on services as opposed to goods. Rising interest rates will help drive the shift, reducing demand for interest rate-sensitive goods like housing and automobiles.

The fly in the rose? 1) The war in Ukraine, as any escalation there that impacts energy and food costs, could dampen consumers’ enthusiasm and ability to travel and eat out as a result of their higher gasoline, utility, and grocery bills. 2) The severity of shortages emanating from China’s Covid-19 lockdowns. Both could drive inflation higher, changing the dynamic.

For some perspective, wage growth picked up even in a quarter when hiring gains were outsized and labor shortages eased as more workers returned to work. This indicates that labor demand continues to outstrip supply by a significant margin, implying that sizable gains in wages will continue. By extension, the dynamic likely puts upward pressure on inflation and the need for sizable Fed rate hikes to combat it.

What to Watch This Week: It’s Fed meeting week, and nearly everyone is expecting the Fed to come out swinging with a double whammy of hiking the Fed Funds rate by half a percent, as well as announcing a detailed plan for unwinding its massive balance sheet (both on Wed.).

Several Fed members have stated that the Fed’s voting committee is committed to raising the Fed Funds rate quickly to the “neutral” rate, the level that neither stimulates nor slows economic growth. Most estimate Neutral to be around 2.4 percent, which translates to about 200 basis points (2.00%) of rate hikes from here (the Fed Funds target rate is currently 50 basis points). The policy route after that is murky, with the global economy recently weakening sharply and financial conditions tightening considerably.

Chair Powell’s task during the post-meeting press conference will be to provide greater clarity on how the committee views the macro-economic headwinds, which range from a sharp slowdown in China to the possibility of a European recession.

At present there are two conflicting dynamics affecting the Fed’s calculus. First are signals that inflation may be peaking, as evidenced by a recent softening in the Fed’s favorite inflation gauge, the core PCE deflator, and consumer’s accelerating spending on services over goods. Second, the Fed continues to see upside risks to inflation amid the red-hot jobs market and the rising wages that come from it. The unemployment rate is expected to match its pre-Covid low of 3.5 percent in the April jobs report (set for release on Friday). As consumer demand for services strengthens, the economy continues to add jobs at a rapid pace, mostly in the leisure and hospitality sector.

Looking beyond this week’s Fed meeting, markets are already anticipating a further 75 basis point hike in June, based on the most recent wage data. We think that’s a little rich, given early indications that inflation in the US is peaking. We suspect that Fed Chair Powell and Co. will refrain from providing any real guidance on the size of future rate hikes as it assesses how its balance sheet runoff affects the economy in the months ahead. 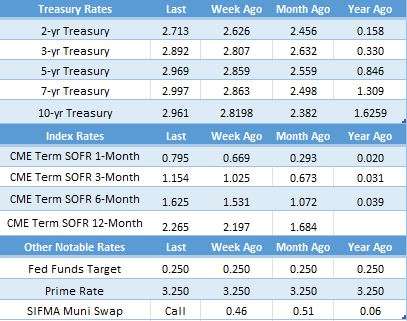 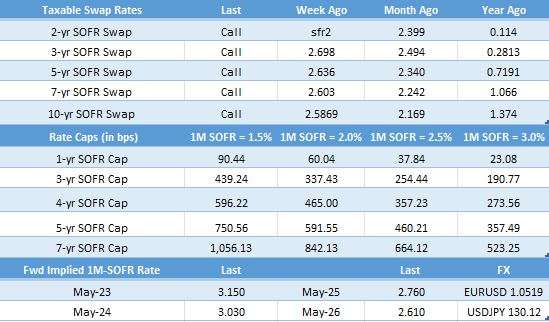 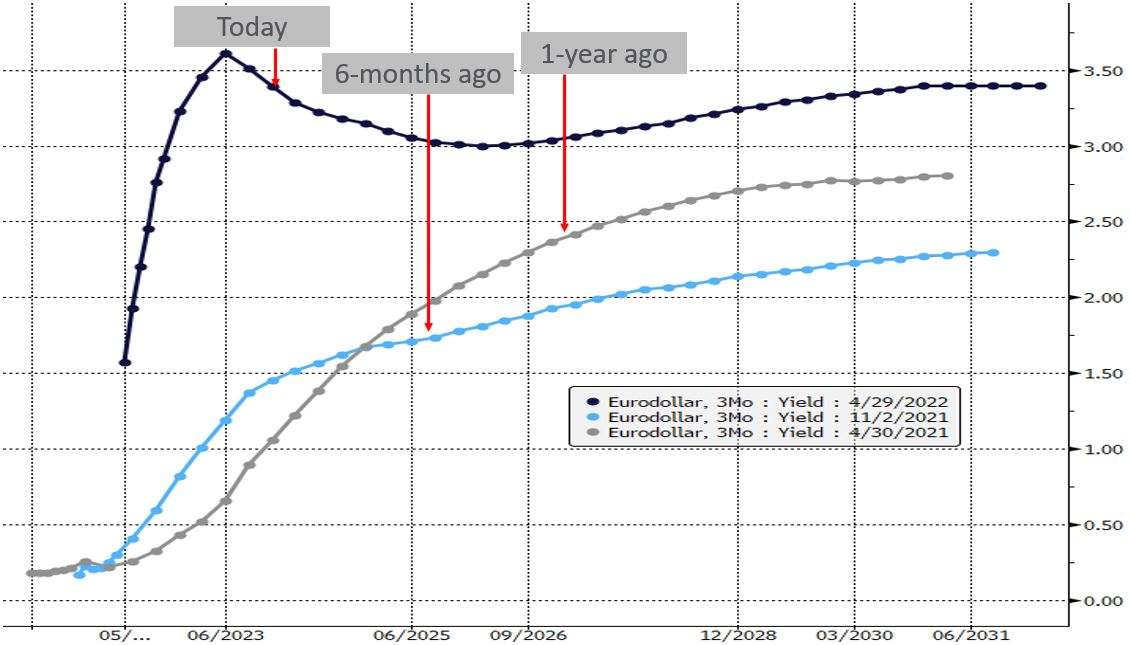 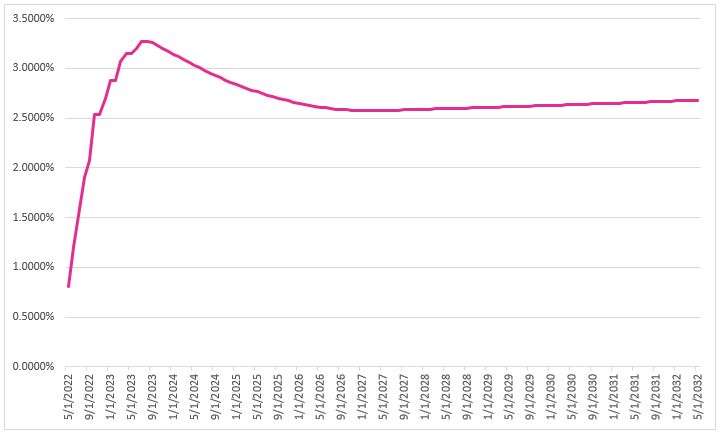 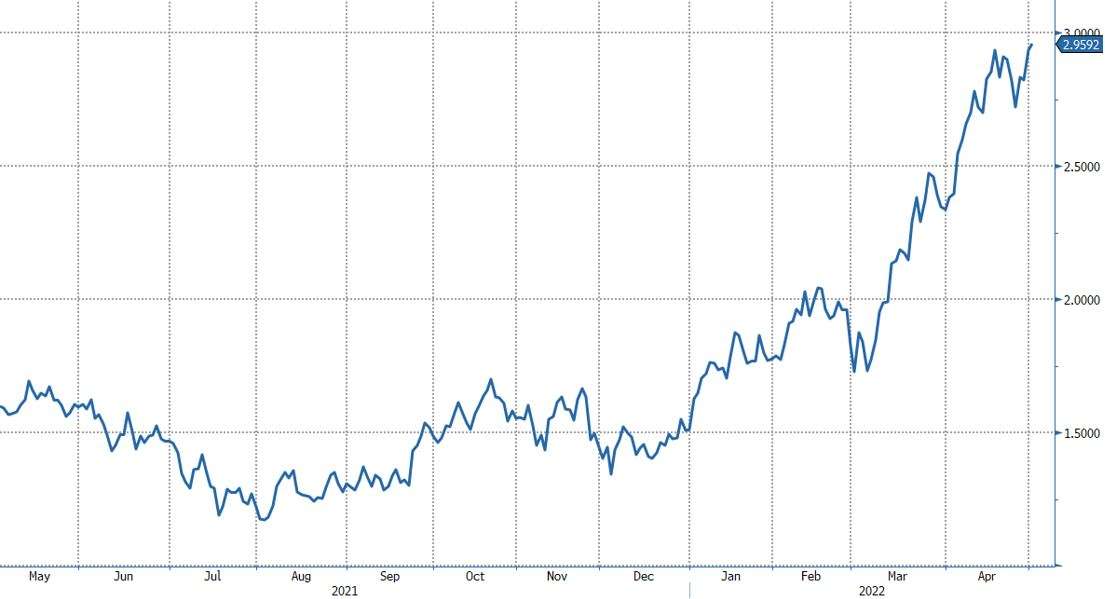