Last Week: Interest rates fell, and equities were little changed on the week, both having surrendered gains made through Thursday’s close after a US airstrike killed a top Iranian general in Baghdad. Markets grew risk averse on the news of the attack due to fears of the conflict intensifying and disrupting the flow of oil through the Strait of Hormuz, a chokepoint in the Persian Gulf. The yield on the 10-year US Treasury note declined 10 basis points to 1.79% during the week. 1-month LIBOR followed suit, losing about seven basis points to wrap the week at 1.78%. The price of crude oil rose around 4% on Friday, to $63.50 as the Middle East flare up cast a cloud of doubt over the future pace of oil production, while the US Dollar and Gold both strengthened as global investors sought safety. Treasury yield volatility spiked to 4.30 from 4.10 this time last week.

Geopolitics reared its ugly head, messing up everyone’s annual interest rate forecasts. The US drone strike in Baghdad early last Friday morning that killed a top Iranian general sent the smart money scrambling over the weekend – including us – as market analysts worldwide digest what it all means for interest rates this year. Iran’s vow of retaliation (will it mean war?) puts geopolitical angst front and center in determining the near-term direction of rates and throws cold water on what was a widely held expectation that rates would remain rangebound and yield curves would steepen. To add fuel to the fire, markets were greeted in the new year with the worst U.S. factories data since 2009.  In other news, North Korea emerged as another geopolitical hotspot as its leader, Kim Jong Un, said that his country is no longer bound by the denuclearization agreement it signed with the US in Singapore in 2018 and may resume testing nuclear weapons and long-range missiles. Curious what it all means for interest rates this year? Keep your eyes out for our Annual Rates Forecast, set for release mid-week.

White House sets date for signing “Phase One” of US-China trade deal. The Trump administration announced that a signing ceremony has been scheduled for January 15th at the White House to make the agreement official. President Trump also announced that he will travel to Beijing at a later date to begin negotiations on “Phase Two” of the accord.

The Phase One deal will result in the cancellation of a new tariff round previously delayed from mid-December and a reduction in the rate on the September tariff round from 15% to 7.5%, leaving the real issues between the US and China – like subsidies to state supported industries, forced intellectual property transfers and the like – unresolved. Although further escalation in the trade war can’t be ruled out, we expect that no new tariffs on China will be introduced by President Trump ahead of the US presidential election. However, while we may be past “peak tariffs,” the two sides agreeing on a “Phase Two” trade deal ahead of the Presidential election is unlikely. As such, don’t expect rates to move markedly from their recent ranges as a result of US-China trade news anytime soon.

What to Watch This Week: Outside of the unpredictable evolution of events in the Middle East, the focus in an otherwise light data week will turn to the jobs market data, where scrutiny will be higher than usual given that the manufacturing sector staged its worst performance for all of 2019 last month.

We expect that 180K new jobs were created in December, and that the unemployment rate remained steady at 3.5%. For some perspective, America’s job creation engine has slowed slightly; the 12-month average in new jobs declined to 184k in November from 235k in January. However, the pace of hiring remains sufficiently above-trend to push the unemployment rate even lower than it is now. Despite the job growth, hiring and growth in wages may be slowing, but the scarcity of labor will prevent businesses from cutting wages in any meaningful way – that’s good for the spending appetite of the US consumer. As long as the US-China trade truce holds and the freeze in business investment begins to thaw, we expect to see stronger job growth – eventually. For the foreseeable future it will continue to be the almighty US consumer, supported by job growth and wage increases, that will be the main driver of America’s economy.

One big wrinkle is the extent that escalated geopolitical tensions in the Middle East add a persistent premium to oil and gasoline prices, and what impact these higher prices have on consumers’ penchant for spending and the overall outlook for inflation. Higher gas prices would add to global uncertainty and act as a tax on consumers, positioning the Fed to abandon its current “on hold” stance and lean more toward a rate cut rather than a rate hike through 2020.

Take-Away: The Fed is indeed on hold for the foreseeable future, being less concerned by the risks that justified their “insurance cuts” in the latter half of 2019, namely trade tensions, below-target inflation and sluggish global growth. The threshold is high for policy adjustments in the near term, particularly for rate hikes, and resistance to a move will increase as the U.S. election draws nearer.

In the very short run, interest rates are now a hostage to swings in sentiment and the marginal news-flow surrounding the Iranian situation.  Even though fare-ups in the US-China trade war now seem less likely, the recent escalation of tensions between the US and Iran serves as a reminder that other sources of risk, and big rate moves, remain. This dynamic, taken together with solid but mostly lackluster economic data, suggests that interest rates will continue to trade in their well-worn ranges, with better economic data needed to push them notably higher.  One caveat: If the recent geopolitical issues worsen, expect rates to fall precipitously, albeit perhaps temporarily, until and if these tensions translate into persistently higher energy prices.

Be on the lookout for our Annual Rate Forecast set for release later this week. 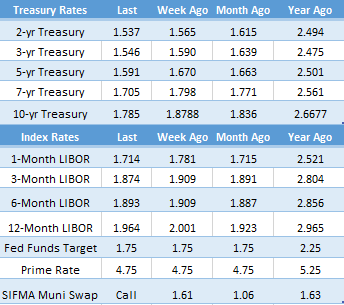 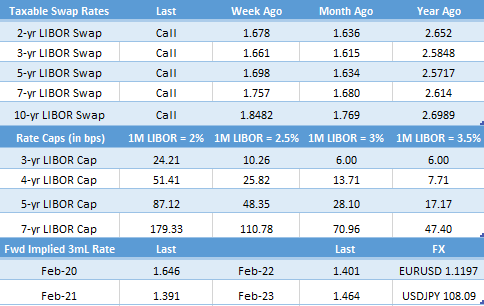