Last Week: Long term interest rates surged to one-year highs amid blooming economic recovery expectations. The yield on the US 10-year note topped 1.62%, surging nearly 20 basis points from lows seen early in the week. Conversely, 1-month LIBOR orbited around 0.11%, near its all-time low. Taken together, anchored short-term rates and rising long-term ones equate to a steadily steepening yield curve. The price of a barrel of West Texas Intermediate crude oil advanced to $65.25 from $62.50 a week ago on a combination of optimism over a global economic reopening and the surprise OPEC+ decision to maintain production caps. The US Dollar surged in concert with bond yields, while Gold weakened. Treasury yield volatility, a key driver of the cost of rate caps and swaptions, surged anew, back to recent highs.

Jobs market rebounded in February. Decreasing COVID-19 infections and rising vaccination levels led to a loosening of coronavirus restrictions in February that resulted in a substantial hiring surge. As a result, the US economy added 379K workers to nonfarm payrolls last month, more than doubling economists’ expectations, while the unemployment rate dipped to 6.2% from 6.4%. Much of the hiring was concentrated in the leisure and hospitality sector, the hardest hit segment of the economy over the past year.

Our Take: The February jobs report, and upward revisions for January, reaffirms that vigorous growth is indeed returning as the economy reopens from winter lockdowns. Evidence pointing to a significant winter weather impact suggests that an even stronger outcome would have occurred, were it not for clusters of severe cold and snow across much of the country last month.

Looking ahead, if you liked February’s jobs growth, you’re going to love March. With much of the economy remaining locked down in February as vaccination distribution was still in its nascent stages, the blowout February job results will likely be among the lowest payroll prints over the next several months. The March result could easily be twice as large, somewhere in the range of 700K+ in new jobs. All told, while the jobs data – historically the most influential piece of economic data on interest rates – seems to indicate continued improvement, total employment is still down around 9.5 million jobs from its pre-pandemic peak. The heady job gains last month won’t change the Fed’s calculus to keep short-term rates low for longer, as immense slack remains in the jobs market – still far exceeding that which followed the global financial crisis recession of 2007-09.

Bond markets dare the Fed to act. Global bond yields continued to rise as investors priced in a robust economic reopening that they fear will result in resurging inflation. The rise in yields – which is happening in almost every major developed economy – elicited varied responses from central bankers around the world. The Reserve Bank of Australia stepped up the pace of its bond buying program to curb rising yields while European Central Bank officials intervened verbally ahead of a rate-setting meeting scheduled for this week. Most importantly, the Fed was a relative outlier as Chair Powell once again avoided forcefully pushing back against the tide of increasing yields. Powell did say that the yield bounce 1) has caught his attention, and 2) that disorderly moves would be unwelcome, but, 3) stopped well short of implying that the Fed would change the composition of its quantitative easing program or suggest other steps to keep the yield surge from derailing a nascent economic recovery.

Our Take: Despite some consolidation in long-term yields – like the 10-year Treasury – last week, the yield rout of 2021 isn’t over yet. We can’t raise our yield forecasts fast enough, and now expect the 10-year Treasury to rise at least 0.50% higher than current levels, to settle somewhere in the neighborhood of 2.00% before year end. Adding fuel to the expected rise in yields is the successful passage of the ~$1.9 trillion fiscal stimulus package and the ensuing bond issuance from the Treasury to pay for it all. Finally, the improving vaccination picture is working on Main Street to help speed things along. Let’s just hope Spring break doesn’t bring with it another virus infection surge.

As we’ve said many times before, the Fed’s number one goal right now is to get the jobs market back to where it was before the pandemic. With nearly 9.5 million extra people still unemployed from January 2020, don’t expect the Fed to change its easy money stance any time soon. Inflation fears? We haven’t seen any real inflation in the economy since the 2008 financial crisis, but prices have indeed risen in things consumers pay attention to, like gasoline, food and housing. The problem? The Fed sees these price increases as transient. This divergence in viewpoint will continue in the near-term, but if gas, food and housing prices continue to climb, the Fed will eventually have to respond. It’s something that the stock market doesn’t want to hear, but something bond markets are already pricing in, via higher yields. The bottom line: With financial conditions clearly tightening and a Fed that’s showing little concern, the path is clear for long-term yields to go even higher.

What to Watch This Week: The days ahead will supply a steady stream of mostly second-tier economic data releases, most of which will be viewed from an inflation perspective.

The main data release will be the latest reading on consumer inflation (Wednesday), which we expect to be tame outside of gasoline and possibly utility prices. Small business sentiment (Tuesday) and the preliminary look at March consumer sentiment and household inflation expectations (Friday) will add to the emerging inflation picture, which, overall, we expect to be tame and not illicit a response from the Fed for the foreseeable future.

We won’t hear from the Fed at all this week, as they’re on a communications blackout ahead of the March 17th monetary policy meeting.

Big Picture: Many times in the past, the financial markets have led the Fed – like a dog on a leash – toward eventual rate hikes. While the easy money Fed, fiscal stimulus and vaccine trifecta will get us to the point of rate hikes eventually, it won’t happen for a long while yet.

In the meantime, inflation and growth expectations have taken flight and it’s increasingly likely that the Fed will have to respond sooner than they’re indicating to cool things off down the road. While the Fed has implied that it will keep rates near zero until at least the end of 2023, financial markets are now pricing in a 0.25% rate hike at the end of 2022. What will help steer market expectations for rate hikes in the near term are 1) how financial markets trade risky assets, like stocks with high price/earnings multiples, and 2) credit spreads. Should we see equity markets suffer substantially and in a disorderly fashion, and credit spreads widen markedly, you can expect the Fed to hike much sooner than the “end of 2023” timeline they’re broadcasting. A 10-year Treasury yield above 2% would only speed their response.

Is your debt portfolio prepared for the new world of higher interest rates? Call us to find out. 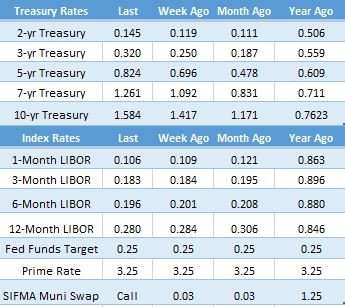 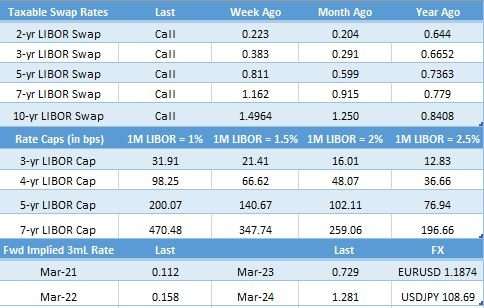 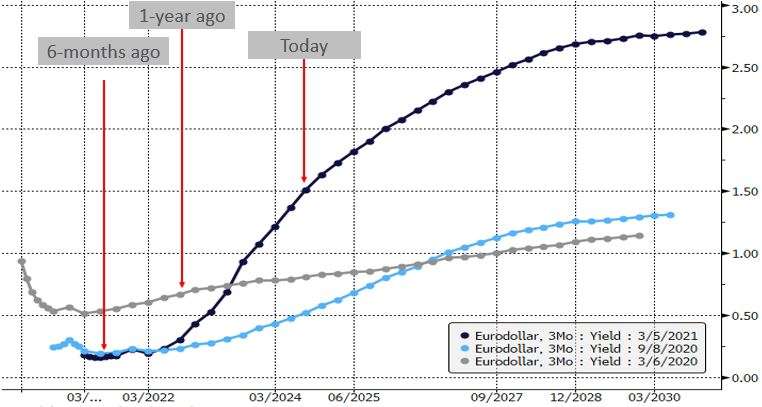 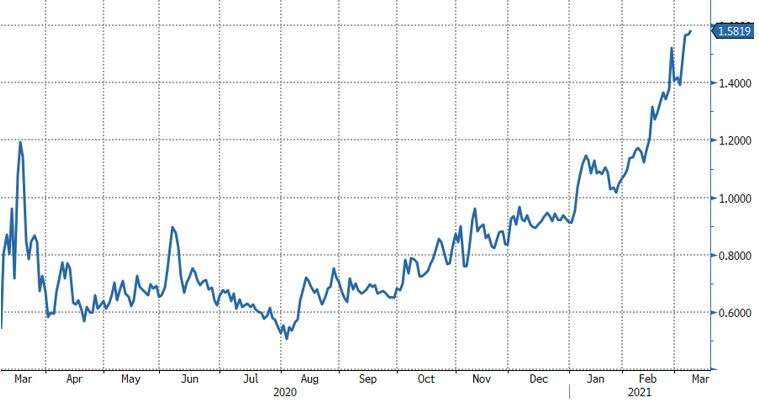