Last Week: Interest rates were mixed, and equities were modestly lower on the week in jittery trading amid the great pain and uncertainty brought forth by the pandemic. The yield on the US 10-year Treasury note floated within a tight range, wrapping the week near 0.61%. 1-month LIBOR finally closed in on the Fed Funds target range of 0.00% to 0.25% , falling to 0.4408%, a full 20 basis points below its 0.66% peak early in the week. The spread over Fed funds over the past 10-years has averaged approximately 8 basis points. The price of a barrel of West Texas Intermediate crude oil fell to $16.50 from $25 a week ago amid wild price action, firmly on its back foot as a collapse in demand pummels the oil & gas industry with no end in sight. The US Dollar and Gold both strengthened. Treasury yield volatility, a key ingredient of the cost of rate caps and swaptions, continued to mellow, falling to 5.79 from 7.18 this time last week. The recent peak for volatility topped 16.00 on March 19th.

Coronavirus update: More signals of economic pain. Flash purchasing managers’ indices – gauges of the direction of economic trends in the manufacturing and service sectors – fell to record-low levels, demonstrating the depth of the global downturn in economic activity as a result of the coronavirus outbreak. The indices in the eurozone and the United Kingdom smashed records, falling to 13.5 and 12.9, respectively, on a scale where any read below 50 signifies a contraction. Japan’s fell to 27.8 while the US reading fell to 27.4. US businesses which remained open for business saw the steepest drop in demand on record while also facing twin headwinds from staff shortages and supply chain delays. The purchasing managers’ data added to the drumbeat of staggeringly weak economic data.

Jobless claims reached a turning point, but there is more pain to come. Amid the spigot of dire economic data releases in recent and coming weeks, the timeliest indicator of the speed and magnitude of the economic freefall we are all experiencing is weekly filings for unemployment insurance, aka initial jobless claims. Jobless claims filings last week declined 810K but continued to run at eye-watering levels. The recent reading showed a decline to 4.4 million in the week ended April 18 from 5.2 million in the week prior, a third consecutive weekly drop from a peak of nearly 6.9 million at the end of March. The total of the newly jobless over the past five-weeks is over 26 million, or more than 16% of the nation’s labor force. While last week’s decline in filings is an important turning point, the flood of claims will likely continue as overburdened state filing systems catch up. All told, recent economic data tell us that once coronavirus cases subside and the world’s major economies come back online, the economic wounds caused by the pandemic will take many quarters to heal. What will the economic landscape post-pandemic look like now that some locales are cautiously peeking out of their hidey-holes? While the outlook is coming into view, it is still very uncertain. Keep reading for a glimpse into how we think it will look.

Fitch: Expect sovereign downgrades. Fitch Ratings said 2020 is set to be a record year for sovereign downgrades, largely because of the shock from the coronavirus pandemic and the pressure on public finances as governments enact stimulus measures despite lower tax revenues from weaker growth. Fitch has cut ratings on 23 sovereigns so far this year, and with 25 countries currently holding negative outlooks. The credit rating agency said an unparalleled global recession is now underway. With Fitch on the downgrade warpath, S&P cannot be far behind.  As such, we’re on high alert for any downgrades of banks. Should bank downgrades occur, it could present an issue for rate caps, but not on interest rate swaps.  On most required hedges (e.g. swaps) there is usually credit trigger language which protects the borrower and lender in the event certain credit ratings are breached. We’ll keep you posted.

Oil traded negative. Last Monday, just before the expiration of the May West Texas Intermediate crude oil futures contract, traders were forced to pay counterparties to take unwanted barrels off of their hands due to a lack of storage space in Cushing, Oklahoma, where physical settlements take place. The price of a barrel for May delivery settled at -$37.63, the first time that the commodity has traded at a negative value. Anyone with a large swimming pool could have purchased a physical delivery futures contract and received a check to fill up your pool – crazy. Price swings in the June contract were massive too, falling from nearly $25 on Monday to as low as $6.50 on Tuesday before rebounding to $16.50 Friday morning. The combination of very weak demand due to coronavirus lockdowns and a positive supply shock as a result of the Saudi-Russian price war has left the market saturated with crude. Why you should care: There is a faint, lagging correlation between the price of oil and short-term interest rates. With oil prices at rock bottom, any appreciable move higher in rates is increasingly unlikely anytime soon.

What to Watch this Week: A trifecta of central bank meetings ( the Fed, European Central Bank and Bank of Japan), the first look at Q1 GDP (Wednesday) and the continued intense scrutiny of one of the timeliest gauges of economic dislocation – jobless claim filings (Thursday) – will take top billing amid an otherwise busy economic data docket.

Everyone expects the Fed to sit tight at this week’s meeting – no new policy actions – and to use the meeting as an opportunity to regroup and reassess current conditions and the effectiveness of its overtly stimulative policy measures of late. The Fed is expecting a severe economic contraction, mainly centered in Q2. As such, the Fed’s messaging at this week’s meeting will likely signal to the world that it has ample tools and policy space at its disposal – reiterating a commitment to do more as needed – and that it remains constructive on the outlook for the economy after a swift but sizeable pandemic-driven contraction has run its course. It takes two to Tango to bring the economy back online, and that means the Federal Reserve and Congress must coordinate their efforts. So far so good.

What will not be mentioned in this week’s Fed meeting but is likely in the back of Fed officials’ minds is deflation: a general decline in prices for goods and services, which, among other negative things, increases the risk of a contraction in the availability of credit. That’s a bad thing for corporates, real estate entities and municipalities that need to borrow to function. The collapse in oil prices and the steady stream of dire economic data are placing worries about deflation front and center. If deflation does show up in the US, the Fed may struggle to reverse the phenomenon, increasing downward pressure on rates, potentially driving them into negative territory. Stay tuned – we’ll analyze this more in future publications of DL Monitor.

Big Picture: Now that signs of a calming in the pandemic are coming into view, we thought it best to briefly assess the current economic landscape and forecast what our economic life will be like post COVID-19.  In short, Q1 numbers will show a moderate economic contraction, but one that quickly accelerates into a record-breaking dive in Q2, resulting in a recession that will turn out to be both the shortest, we hope, and most severe since WWII.

As for the rebound, it will depend on the effectiveness of containment measures, which in turn will determine how quickly various sectors of the economy can reopen. Forget a “V-shaped” recovery; it just won’t happen. It’s more likely that the economic recovery will look like a long and shallow “U” or even a “W”, as the vigor of the rebound will be constrained by a slow, staged unlocking of containment measures and slow-to-resolve damage to consumer finances. If the re-opening of the economy occurs too fast, the virus will bloom anew, more people will get sick, and the shelter-in-place mandates from states will be re-imposed in abbreviated fashion, stifling the economy all over again. Then the cycle repeats. For this reason, it’s likely that only essential parts of the economy in the highest infection/population density areas like NYC will reopen anytime soon, like some schools and factories with skeleton crews.

As such, real Gross Domestic Product will skid from -5% in Q1 toward a -35% contraction in Q2, rebounding close to 15% in the second half of 2020. Adding it together, US economic growth for all of 2020 will be deeply negative. The unemployment rate will peak at 17% in May and eventually decline to 8% by year-end. For comparison, unemployment after the Great Recession in 2009 topped-out at 10%.

The emergence of deflation will become a real threat in mid-2020 and beyond as the collapse in oil prices, a strong dollar, spare industrial capacity, a dearth of new jobs, and weak commodity prices all conspire to keep prices low and headed lower. Inflation, despite the government’s alphabet soup of stimulus packages, will be a non-issue throughout 2020 and beyond. The Fed will keep rates at the zero bound through all of 2021 but will unwind most of its stimulative programs before mid-2022, after which we’ll see the first post-pandemic rate hike.

Curious how the dire near-term outlook will impact your financing/interest rate hedging strategy? Don’t rely on the biased view of your bank; level the playing field with a highly experienced, time-tested independent third party like the team at Derivative Logic. 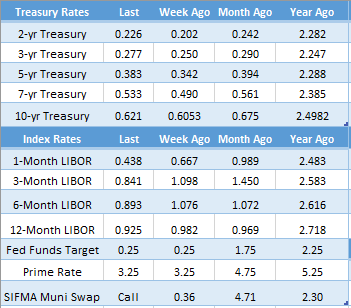 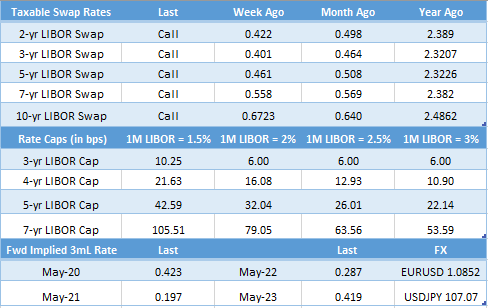