Last Week: Interest rates were mixed, and equities rose slightly following a slow start to the week. The US 10-year Treasury note yield moved higher for the second straight week, climbing to 0.71% on improved economic data while 1-month LIBOR fell two basis points to 0.15%. The price of a barrel of West Texas Intermediate crude oil rose $0.66 to $42.16, as the US Dollar and Gold both fell. Treasury yield volatility, a key driver of the cost of rate caps and swaptions, remained constant at a subdued level throughout the week.

Congress adjourns without a relief deal. Despite President Trump’s executive action last weekend to extend extra jobless benefits, promote eviction protections, sustain existing student loan relief, and create a payroll tax holiday, Congress failed wrap up its recent session with a stimulus deal. The lack of Congressional action increases the odds that the President’s measures could fall apart in court – where Democrats are contesting them – because they attempt to usurp the role of Congress as the appropriator of federal funds and because it could take outdated state unemployment systems weeks to adjust to the new rules and payout benefits. The two parties are said to be far apart, and the negotiations will continue when Congress reconvenes after Labor Day, which could put many people at risk of falling into poverty in the meantime.

Our take: As shown by the discussion in the paragraphs below, the need for more stimulus will likely only increase in the coming weeks, bringing Congress’s failure front and center with America’s inability to achieve a timely and sustained economic recovery. We still think Congress will pass fiscal stimulus legislation eventually, but the odds of near-term action have declined and uncertainty around the eventual policy outcome has increased. With the Senate on recess until Sept. 8 and negotiations stalled, a fiscal deal is unlikely until next month. Delays in implementing President Trump’s executive orders would be a drag on growth, blunting any positive developments in economic data in the coming weeks. It’s a scenario that – absent a major legitimate breakthrough on the vaccine front – will keep downward pressure on interest rates over the next several weeks. The next major deadline comes on September 30th, when the federal fiscal year ends, after which the government would partially shut down on October 1. This is likely an outcome that both sides would like to avoid, and this deadline now appears to be the most likely event to force an agreement on a fiscal package. Despite the deadlock, there is the possibility Congress may cut their recess short and return to Washington.

Jump in prices sparks renewed fears of inflation – is the fear justified? Core consumer prices (aka, a signal for inflation) in the US jumped the most since January 1991, signaling that some prices could be stabilizing after falling precipitously during COVID-19 shutdowns. According to the US Bureau of Labor Statistics, core inflation (less food and energy) was up 0.6% and is now running at a 1.6% rate year-over-year on an unadjusted basis. The jump was the biggest in nearly 30 years but was still below the US Federal Reserve’s 2% target. What it means: While some believe the data signals the return of inflation, and hence higher interest rates in the near term, we beg to differ. The inflation signal is merely the result of the initial rapid post-lockdown rebound in overall economic activity, with a full return to the pre-pandemic trend likely to ultimately prove incomplete. Lingering excess capacity in the economy in the months ahead will prompt the Fed to focus on the risks of subpar inflation – not rising inflation – as it contemplates changes to its policy strategy and communications. It’s a recipe for interest rates to stay low for longer.

Landlord’s fears of missed rent payments in July prove overblown, but a Congressional deal on stimulus is critical for the future. A key component of the consumer price data for July referenced above is the cost for shelter and lodging.  Shelter prices increased 0.2% vs. 0.1% prior, rebounding after the pandemic-driven deceleration. On a year-over-year basis, shelter prices remained at 2.4%, unchanged from June’s reading. For some perspective, the June and July prints were the lowest rate since November 2013, and the six-month annualized rate (1.8% vs. 2.0% prior) dropped to the slowest pace since July 2011. Lodging away from home – the category hit hardest by lockdowns – held steady for a second consecutive month (flat at 1.2%) following three straight negative readings.

Our take: The partial recovery in rents in July suggests concerns among landlords – that they would not be able collect full payments – have diminished. The US government bureau responsible for collecting the rate statistics requires data collectors enter the full rent amount due regardless of when it is expected to be paid – but only if landlords expect full payment. Improving employment statistics may have played a role, although many Americans continued to depend on stimulus funds, mainly in the form of unemployment benefits, including the Federal supplement to state’s benefits. As such, Congress’s inability to reach consensus on a fiscal package remains a significant risk to tenants’ ability to pay. Thus, the apparent recovery in shelter prices may falter in the absence of a stimulus deal.

The jobs market is showing continued signs of improvement – will it last? Our favorite high frequency gauge of our economic fortunes post-pandemic – initial jobless claims – fell sharply for a second consecutive week. The decline leaves the number of Americans filing for unemployment benefits below one million for the first time since the pandemic began, and signals that the positive inflection point in new jobs seen in mid-July has been followed by incremental labor-market recovery. However, do not let the good news go to your head. Elevated virus cases and the approaching back-to-school season bring unique risks to economic activity, and we are not out of the woods just yet. Delays in implementing executive orders for stimulus or a failure to reach a durable stimulus agreement in Congress will likely be a drag on the economic momentum, likely blunting recent progress on the jobs front.

Other data signaled the economy is indeed recovering, but at a slower pace. A widely tracked measure of consumer sentiment was roughly unchanged in its preliminary reading for August. Opinions about financial situations versus a year ago barely budged and the number of respondents reporting improvement has remained in a tight range of 38% or 39% for the past five months, well below the all-time peak of 58% in February. Given that consumers are responsible for roughly 70% of US economic activity, and are key to any sustained economic recovery, the small advance in the headline (up 0.3 index points) and the 1.0 index-point increase from the April low reflect ongoing uneasiness amongst consumers about their financial futures, mainly the result of policy gridlock in Washington.

What to Watch This Week: On the data front, Monday’s Empire State and Philly Fed manufacturing gauges will likely show continuing improvement as more factories reopen and the region shows progress suppressing the spread of the virus. A slew of housing data, released in pieces throughout the week, is set to show the sector benefiting from historically low interest rates amid a shift in living-arrangement preferences in the wake of the pandemic.

On the Fed front, Wednesday’s release of the FOMC minutes from the July 28-29 monetary policy meeting will offer clues on whether Fed officials plan to introduce new language, as a form of forward guidance, into its policy statement at the next policy meeting on September 16th. While no one expects the Fed to hike or cut rates at the meeting, we suspect the Fed will introduce outcome-based guidance to markets (e.g. ”we won’t hike rates until the unemployment rate is under 5%”) along with a new set of economic forecasts that could create a road map of sorts for future Fed actions. Time will tell.

Big Picture: The Presidential election season shifts into high gear today as the Democratic National Convention kicks off in Milwaukee, Wisconsin and the Republican National Convention starts next week in Charlotte, North Carolina. Regardless of who leads in the polls, the need for more help for individuals and businesses via Congressional stimulus remains.

In reviewing the two candidates, markets will face a tradeoff between low-tax, low-regulation capitalism and unpredictability under Trump, versus a higher-tax, higher-spending backdrop with more familiar standards of governance, under Biden. A divided Congressional result may be more impactful and would mean more friction on economic stimulus deals and more financial suffering for individuals and businesses. 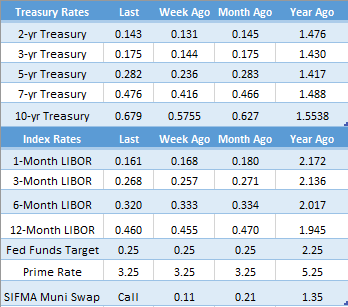 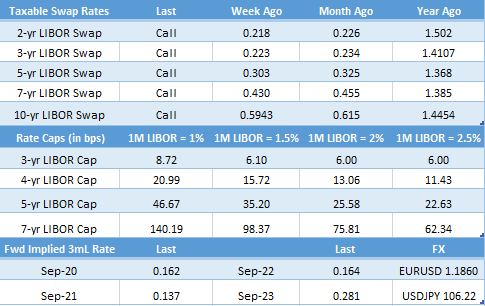 What Will Happen to Rates When a Vaccine Shows Up?
Scroll to top