Last Week: Interest rates and equities both fell on the week amid a rising number of coronavirus cases in the US and Europe, spurring jitters that the economic recovery will be slower than expected. The yield on the US 10-year Treasury note dipped to 0.66% from 0.69%, as 1-month LIBOR fell to 0.146% from 0.151%. The Secured Overnight Financing Rate, or SOFR, also fell slightly to 0.07% from 0.08% this time last week. Elsewhere, the price of a barrel of West Texas Intermediate crude oil fell to $40 from $41.25, as the US Dollar strengthened, and Gold weakened. Treasury yield volatility, a key driver of the cost of rate caps and swaptions, fell throughout the week. For some perspective, volatility in Treasury yields has never been lower.

Fed vowed to do whatever it takes, while stressing more stimulus from Congress is needed urgently. In congressional testimony, Fed Chair Powell said that the central bank “remained committed to using our tools to do what we can, for as long as it takes, to ensure that the recovery will be as strong as possible, and to limit lasting damage to the economy.”  While noting a continued improvement in economic conditions in recent weeks, Powell acknowledged that the path ahead continues to be highly uncertain. Powell, along with several members of the Federal Open Market Committee, believe the economy will recover more quickly with the aid of additional fiscal stimulus from Congress, like an extension of the Federal top-up to state’s unemployment benefits.

Our take: Too bad for Powell (and the rest of us), appetite for a bipartisan fix has seemingly evaporated ahead of the November Presidential election. While the Fed’s strong steps in March and April to mitigate the most severe economic impacts of the lockdown-induced recession are commendable, its current programs – mainly Fed-directed lending programs, e.g. the CARES Act –  to help businesses have either lapsed or are proving less beneficial than envisioned. With many businesses distressed, loans may not be the right solution at present, as many of the intended recipients simply would not qualify. That leaves us with the Paycheck Protection Program (PPP), which only Congress can extend. It stopped accepting applications in August, even with $134 billion in funds remaining.

The initial stages of the economic recovery have shown a resilient top-line economy as lockdowns ended. However, a critical time lies ahead; with the intensity of the virus still elevated and with winter looming, more activity will be moving indoors, likely lengthening the work from home trend and pressuring many service businesses even further. To improve individuals’ unemployment situation and help small businesses, Congress’s spending powers would be more effective than the Fed’s lending programs. Given the brief Congressional session before the election, we likely won’t see a break in the negotiation stalemate until late in the year or early 2021; it’s a recipe for a significant economic slowdown in Q4 2020 and Q1 2021.

Uptick in coronavirus cases is hampering the services sector globally. Flash readings of purchasing managers’ indices (PMI) for the US and Europe showed that while manufacturing activity continues its recovery, the services sector is having trouble as an uptick in coronavirus infections keeps consumers cautious. The downtick in services was particularly evident in Europe, with the PMI declining to 47.6 in September from 50.5 in August. The US saw a milder loss of momentum, with the measure declining to 54.6 from 55.0. The European manufacturing index rose to 53.7 this month from 51.7 a month ago while its US counterpart expanded to 53.5 from 53.1. With both Europe and the UK announcing new coronavirus restrictions last week that will last for months, the situation won’t improve anytime soon.

US durable goods orders were mixed in August as storm clouds gather. In what is an actively watched gauge of the post-pandemic economic recovery, orders for goods expected to last more than three years rose 0.4%, but nondefense capital goods orders, ex aircraft, so called “core” orders, rose a stronger 1.8%. The data showed that orders and shipments of goods – excluding those in transportation categories – have effectively recovered to pre-pandemic levels.

Our take: Durable goods orders are widely seen as a gauge of corporate appetite for large capital expenditures (“Capex”), a vital activity in a growing economy. A big driver of capex is corporate profit growth, and while last month’s durable goods data is respectable, we suspect its strength will fade into year end. Weak corporate profit growth – or outright declines in profits for many businesses – and slack capacity will keep capex budgets tight near-term, compounded by softness in the oil and gas industry. In 2021, that headwind may turn to tailwind however as surviving businesses eye a weaker dollar and recovering profits as a basis for expansion.

What to Watch this Week: It’s a busy week chock-full of important data and events. With the first presidential debate scheduled for this Tuesday Sept. 29, the election season is reaching the home stretch. Meanwhile, the last jobs report before the election will be released this Friday. While it’s historically the most important piece of economic data for interest rates, this time around the jobs report won’t indicate either significant job gains nor losses, won’t be consequential for the election outcome, and thus is expected to have a muted impact on rates this week.

Nonetheless, America’s performance in creating new jobs last month will be shaped by two opposing forces:  the expiration of the $600 add-on to jobless benefits, which encouraged many to look for a job, and waning PPP funds meaning distressed businesses have to let workers go.

Elsewhere, important data on consumer confidence, Q2 GDP, personal income and spending, the state of manufacturing and construction spending will paint a picture of slowing momentum, solidifying the need for more aid from Congress.

Big Picture: Economic data in recent weeks has shown that economic strength from the initial recovery after Covid-19 lockdowns eased has lost momentum. Without an effective and sustained containment of the virus (vaccine anyone?), the economy cannot fully reopen and emerge from the downturn. The biggest risk now is a prolonged and shallow recovery, which will threaten America’s longer-term growth prospects.

As such, and with Congress’s seeming impasse in enacting more aid to individuals and businesses likely until well after the election, markets are now shifting their attention toward how the election outcome will shape the economic momentum through year end and beyond, and with it, the direction of interest rates.

It’s important to know that neither the level nor direction of Treasury yields has obvious correlation to political control in Washington. The long-term uptrend in yields starting in the 1950s ended during a period of split government in the early 1980s. The 35-year trend toward lower yields saw interim turns higher, regardless of which party was in power. With that, let us examine a few election scenarios and how rates could shake out from each: 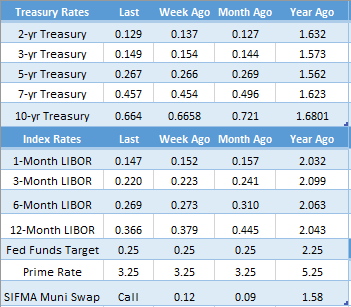 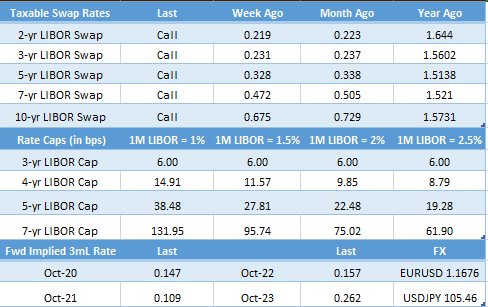 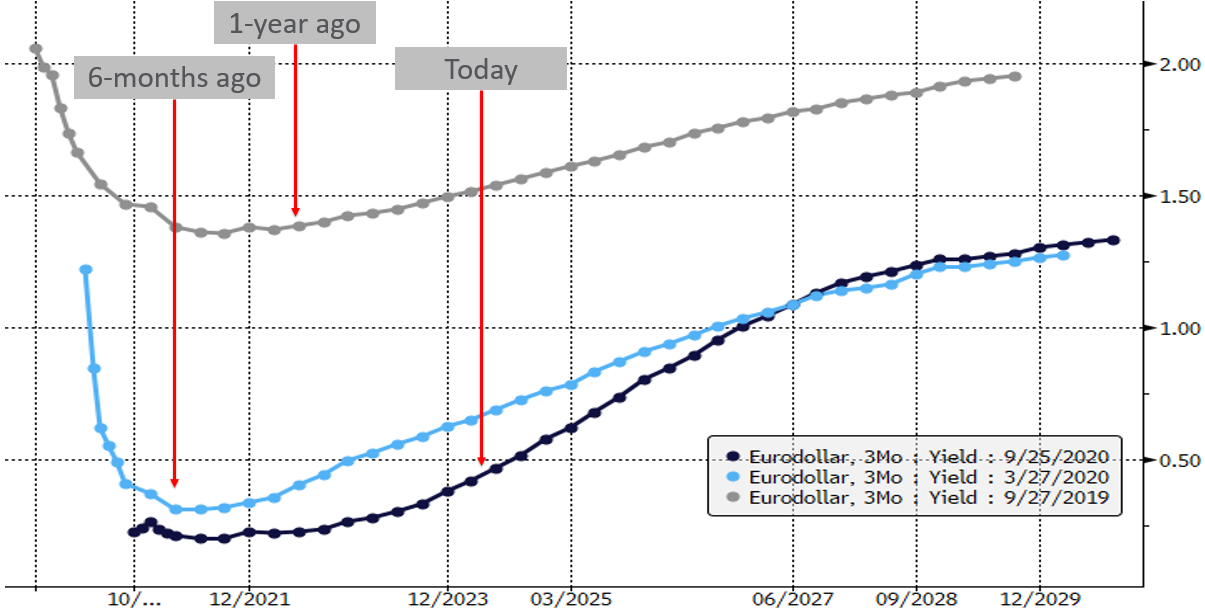 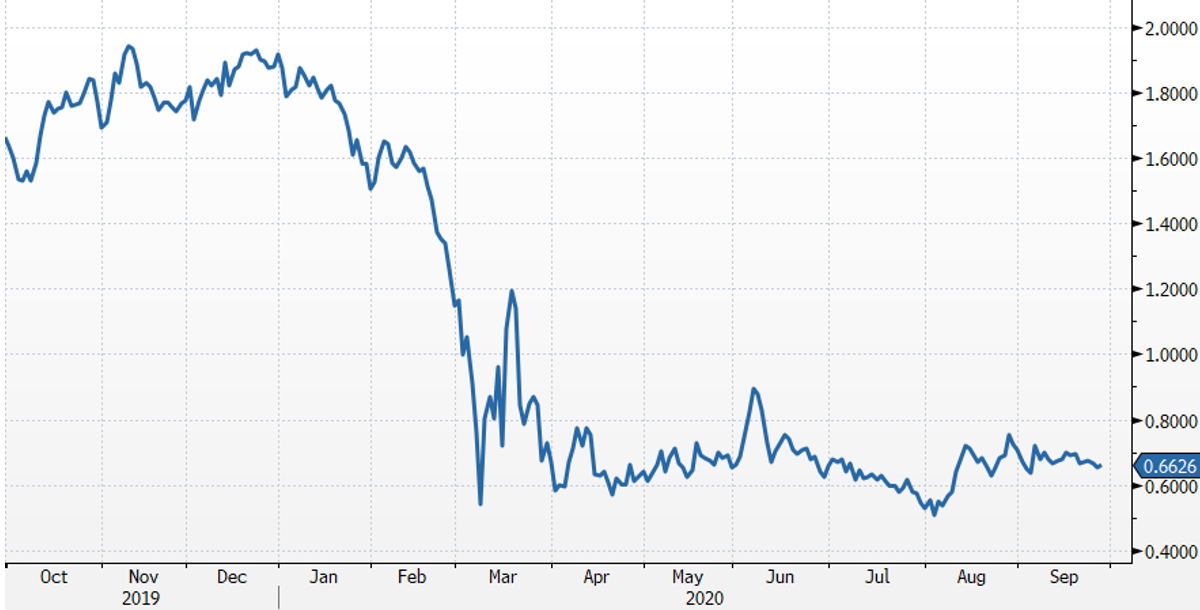 Click here for more DL Reports
Fed: No Hikes Until We See the Whites of Inflation’s Eyes