Last Week: Interest rates were mixed, and equities saw little net change on the week amid choppy, headline-driven markets. News that the US and China may avoid all out-trade war drove markets early in the week, while a continued focus on privacy issues undermined mega-cap tech shares and pushed bond yields lower late in the week. US 10-year Treasury note yields fell to 2.7389% from 2.8520% the week prior, while 1-month LIBOR wrapped the week at 1.8831%, up from 1.8768%, but lower than the 1.8869% high hit late in the week. Oil slipped to $64.50, the US Dollar strengthened, and Gold weakened. Treasury market volatility, as measured by the Chicago Board Options Exchange Treasury Volatility Index, (TYVIX), jumped to 4.17 from 4.04 a week ago.

The US economy grew 2.9% in Q4. The good-times persisted at least through the end of last year as US economic growth was revised to a 2.9% annual pace in the final quarter of 2017, up from the 2.5% pace reported last month. Economists had expected growth to finish the year at a 2.7% rate. That data showed robust consumer spending and an uptick in business inventories. For all of 2017, the economy grew 2.3%, after growing just 1.5% in 2016. The pace of growth leaves the economy well-positioned to extend its run, and the Fed’s gradual approach to rate hikes will provide a tailwind to such an outcome. While we expect growth in Q1 2018 to slow, as it has in every year for almost the last decade, it will rebound later in the year.

The US-China trade war is beginning to look like a trade spat. Markets breathed a sigh of relief early last week when the Wall Street Journal reported that US and Chinese officials had been negotiating potential trade concessions on the part of China. Despite the negotiations, both sides are preparing to levy tariffs on selected goods. The US initiated a 60-day comment period on proposed tariffs, which will largely target high-tech equipment initially, as China is said to be weighing retaliatory tariffs on airplanes, autos, agriculture and semiconductors. While we maintain our belief that an all-out trade war will be avoided, the trade issue has the potential to move interest rates around in sudden, unpredictable ways despite the perceived progress.

US kicked out Russian officials. The US announced the expulsion of 60 Russian officials and closed Russia’s consulate in Seattle, Washington. The moves come in response to an attack on a former Russian spy and his daughter living in Great Britain. Twenty-five nations have expelled almost 150 Russian diplomats in response to the attack, which they blame on Russia. Growing tensions between Russia and the West could increase tensions in the Middle East, where Russia is supportive of the governments of Syria and Iran. Any geo-political flare-up in the regions could cause rates to dip.

What to Watch This Week: On the data front, this Friday’s release of the March jobs report will be the primary focus. If the past is any guide, America’s job-creation engine likely sputtered for the month, but any disappointing number won’t signal a deterioration in the overall labor outlook. While the report includes reads on the number of new jobs created, the unemployment rate and wages, our focus is on the unemployment rate and the pace of wage increases, as they are a more direct pulse of future spending by individual consumers, who are responsible for 75% of US economic activity. With job gains handily exceeding the natural growth rate of the labor force, the unemployment rate is due to fall further in the near term – below the 3-handle – if not in March, then in Q2, and wages should continue their slow but steady gains. Overall, we’re expecting 200K in new jobs created in March, and an unemployment rate of 4.0%. Should the unemployment rate come in below 4.0%, it would steal attention from any job creation surprises.

Take-Away: Although 1-month LIBOR continues its slow and steady march higher, 10-year Treasury yields have suddenly fallen back to earth, trading at 2.76%, a seven-week low, and off from a Feb-2018 high of 2.95%, a level not seen since 2014. Why the turnaround? Usually we’d pin a move like that on a geo-political flare-up or a sudden sign of nascent inflation or even fresh signals from the Fed that’s its backtracking on planned rate hikes. Not this time. While its easy to only focus on interest rates and all things seemingly related, the recent fall in long-term interest rates has been driven almost entirely by the stock market, where the darlings of once-upon-a time, e.g. Amazon, Facebook, Alibaba, and Tesla are suddenly looking precarious. Sometimes we get flack for even mentioning the equity markets in this newsletter, but we’ve been around long enough to know that sooner or later, it becomes crystal clear that equity markets and fixed income markets bleed into each other.

The trillion-dollar question: Will it continue? For one, calls for a 3% 10-year Treasury yield look foolish for now, as does an end to the 50-year bull market for bonds. Whether the sudden fall in long-term rates is seen as a healthy correction or the start of something bigger remains to be seen and will partly depend on where equity market volatility goes from here. And for 1, 3 and 6-month LIBOR? Lower long-term rates will slow their ascent in coming weeks, but there’s no doubt each will continue to climb higher as long as the economy keeps performing and the Fed sticks to its gradual hiking path. Bottom line: the current mix of higher short-term rates and lower long-term ones equates to a flatter yield curve, which could increase the odds of recession next year. 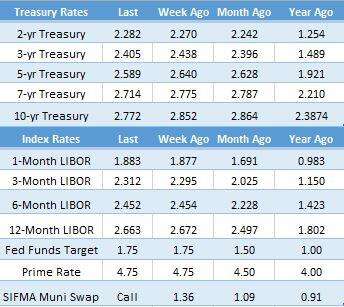 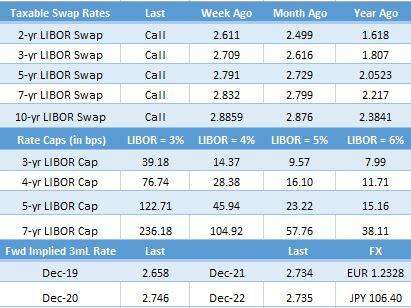 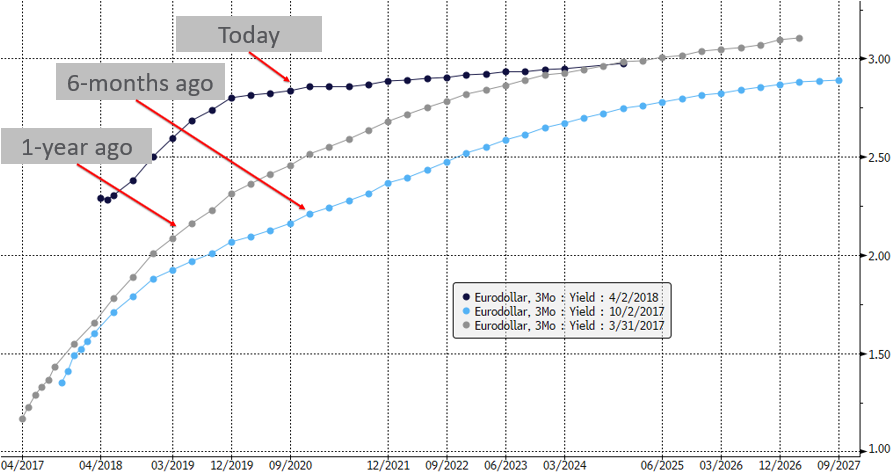