Even Higher Rates Ahead? The Fed is Counting on It

Last Week: Long-term interest rates rose anew while equities were little changed on the week after making a new all-time high on Wednesday. Rising bond yields and strong US economic momentum competed for investors’ attention. The yield on the US 10-year Treasury note continued its ascent, rising briefly above 1.75% on Thursday amid concerns that the Federal Reserve’s new policy framework could leave the central bank behind the curve as inflation heats up. 1-month LIBOR and SOFR were both little changed near record lows. With short-term rates pinned down, the recent rise in 10-year rates has caused the yield curve to steepen to levels not seen in five and a half years. Elsewhere, the price of a barrel of West Texas Intermediate crude oil fell more than $5 to $59.75, as the US Dollar traded flat, and Gold strengthened. Treasury yield volatility, a key driver of the cost of rate caps and swaptions, eased off multi-month highs.

The Fed can’t stop thinking about tomorrow. The Federal Open Market Committee (FOMC), the Fed’s monetary policymaking body, made no policy adjustments during its scheduled policy meeting Wednesday but issued an upbeat economic forecast while signaling no rate hikes are planned through 2023. The FOMC forecasts that the US economy will grow 6.5% in 2021, up from its 4.2% December forecast, and unemployment will fall to 4.5%, down from its early 5% projection. The committee predicted inflation will run at 2.4% this year, materially higher than its 1.8% December estimate.

Our take: As we suspected, the Fed continues to hold the course, maintaining the glide path for both interest rates and asset purchases which it established last year, and does not appear to be close to altering its trajectory anytime soon. The Fed has established a “growth now, jobs later” theme to its outlook, expecting much faster growth this year – mostly in response to massive fiscal stimulus now being unleashed – but little change to the next two years. This will in turn drive unemployment lower eventually, but with only minimal impact on the inflation outlook.

The immense focus on the Fed’s dot-plot – a chart summarizing the FOMC’s outlook for future rate hikes or cuts, continues to make us giggle. Each dot on the chart represents the interest rate forecasted by one of the 12 members of the committee, and the most recent version shows that four Fed members now see a liftoff in rates in 2022 (vs. one in December) and seven see higher rates by 2023 (vs. five prior). We laugh because we’ve always seen the dot-plot, and the market’s intense focus on it as a predictor of when/how much the Fed will hike rates in the future, as a joke. Devout followers of the dot-plot seek to infer a direction in rates where there is none, and Fed Chair Powell’s said as much in his post-meeting statement last Wednesday, no less than five times. Ignore the dot-plot. Its hogwash.

Recent economic data painted a positive picture. The Federal Reserve Bank of Philadelphia’s Manufacturing Survey, which tracks regional manufacturing conditions in the Northeastern US, soared to its highest level in nearly 50 years, reaching 51.8. The data imply that manufacturing is likely also surging across the country – good news. Elsewhere, a large pullback in retail sales activity in February, which follows a sizable upward revision to the January tally, showed that spending by consumers is significantly above year-end 2020 levels.

Our take:  The retail sales data – an important gauge of America’s economic progress considering that the individual consumer accounts for 75% of US economic activity – implies that the previous round of fiscal stimulus has had a more powerful effect than anticipated. Ready for even better news on the retail front in the coming months; the latest batch of stimulus checks, distributed this week, will fuel consumer spending to an even larger degree through the end of the Q1. Taken together, it means that US economic growth could top 6.0% in Q1, as the latest round of fiscal aid – at $1.9 trillion, twice as large as the previous one – fuels even higher growth in Q2 and Q3, putting the US on a path last seen after the 1981-82 recession, when growth clocked in at 7.9% in 1983.

Tying it all together, the robust outlook for growth will certainly accelerate job creation in the coming months, but a full recovery in the labor market won’t come until long afterwards. As of February, 9.5 million Americans were still out of work, equating to a jobless rate of about 9.1% after accounting for those who have exited the labor force. As such, despite the rosy growth outlook, the Fed will continue to look toward progress on the jobs front – not economic growth – to guide its decisions on the timing and degree of rate hikes. The Fed will continue its steady as she goes approach, holding off on easing back the throttle until the jobs market is near recovery. In the meantime, long-term Treasury yields, like the 10-year Treasury, will be free to climb even higher as they further assimilate improving economic prospects.

What to Watch This Week: The data slate in the days ahead is filled with mostly second tier indicators, with signals on new and existing home sales (Monday) Durable Goods Orders (Wednesday), the final reading of Q4 GDP (Thursday), and Personal Income and Spending, and Consumer Sentiment (Friday).

Taken together, this week’s calendar will exhibit data on activity that occurred whilst caught between two waves of fiscal stimulus and may reflect a brief hangover between rounds of income supplements from the federal government. Hence, don’t be surprised or come to false conclusions if we see worse than expected signals – next month’s readings on the same data are poised to make the January surge pale in comparison.

Outside of data, markets will also be tuned into a slew of Fed speakers in the days ahead, especially Chair Powell, for fresh insights. A continued message of patience on tightening rates could spark some to exit bets that hikes may come earlier than the Fed projects.

Big Picture: With the Treasury yield curve recently steepening  (a widening difference between short and long-term yields) to levels not seen since 2016, the Fed is smiling, observing the dynamic as a positive sign that markets believe the economic recovery is indeed happening and content to let markets do the work – via higher long-term rates – of tapping the brakes on economic expansion.

With the positive effects of the next round of fiscal stimulus yet to show its impact on the economy, it’s likely that long-term interest rates will rise even higher still. Since the Fed firmly on hold, that equates to an even steeper yield curve.

Financial market pundits have been keen to suggest the Fed will intervene by tweaking the makeup of its Treasury bond purchases to arrest rising long-term yields. We doubt it. Looking back at economic history, the current steepness of the curve is nowhere near its peak. The Fed’s actions to date have kept the curve much flatter than is typical in past easing cycles. Over the past three decades, the yield difference between the 5-year/30-year and 2-year/10-year Treasury yield curves usually peak a bit above 200 bps. That’s far away from the 1.55-ish in steepness we’re seeing now. Historically, these yield curves then begin to flatten as the market anticipates looming Fed action to ease off the stimulus throttle. We expect the same dynamic this time around; long-term yields will likely move higher before they fall markedly – months from now – under the threat of the Fed spoiling the growth party.

Is your debt portfolio prepared for the new world of higher interest rates? Call us to find out. 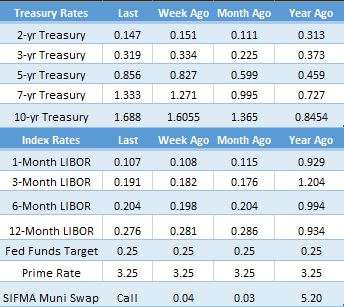 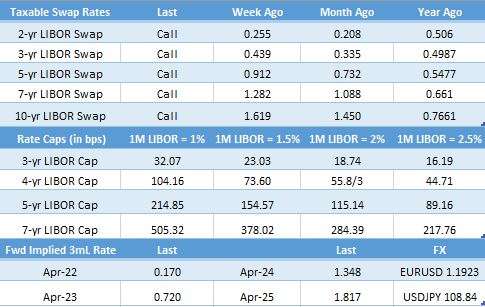 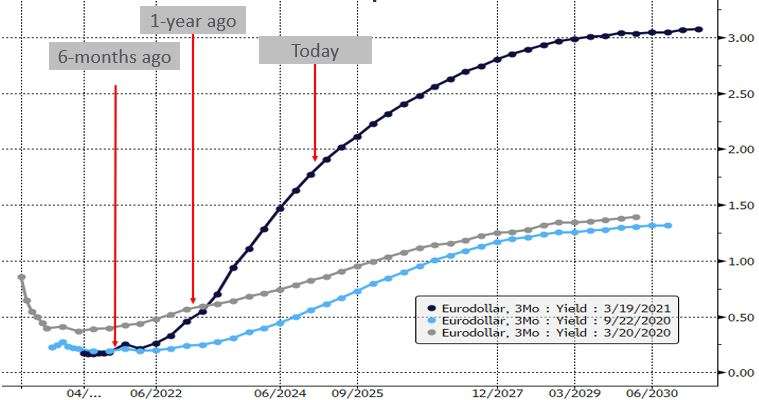 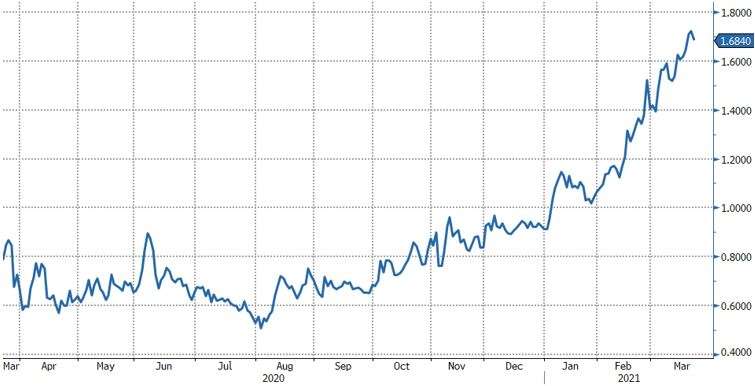