Last Week: Interest rates rose as global equities edged lower, with Japan’s Nikkei average a bright spot, closing at a 21-year high. The US 10-year Treasury yield continued its rise, ending the week at 2.42%, up from 2.38% a week ago. 1-month LIBOR followed suit, climbing to 1.2423% from 1.2379% the week prior. Oil rose slightly as did Gold and the US Dollar. Market volatility, as measured by the Chicago Board Options Exchange Volatility Index (VIX), advanced to 10.8 from 9.9.

The Pace of US GDP growth exceeded forecasts. The US economy grew at a faster-than-expected pace of 3% in the third quarter, handily beating 2.5% forecasts. Economists had expected a moderate slowdown due to the negative impacts from hurricanes Harvey and Irma. Real consumer spending showed continued strength last quarter, rising 2.4%, exceeding forecasts for a 2.2% advance. Core inflation remained well below the Fed’s 2% target, coming in steady at 1.3%. While appearing encouraging at first glance, we believe the robust growth won’t repeat itself in Q4. Indeed, America’s growth trend is accelerating no doubt, but the days of sustained 3% growth have not yet arrived.

The US House passed Senate’s budget blueprint; tax reform is up next. After a year of dysfunction, congressional Republicans appear to be rallying around efforts to reform the bloated US tax code. On Thursday, the House of Representatives passed the Senate’s budget bill, laying the procedural groundwork for the passage of a tax reform package without any support from the Democratic opposition. An initial bill is set to be released as early as this week, with a vote possible by late November. Details of the measure are still being worked out as constituents balk over the potential loss of tax deductions for state and local taxes, as well as potential changes to the tax treatment of 401(k)s.

ECB trimmed QE program but vowed to keep rates low. The European Central Bank delivered what many in the markets had been hoping for, a “dovish taper”: continuing QE longer, but in smaller amounts than expected. ECB president Mario Draghi said that rates will stay at present levels well past the end of the quantitative easing program, with the central bank keeping open the option of increasing the size and duration of QE if necessary. The news was supportive of US Treasuries, as higher yields in Europe  could have sapped some demand for US sovereign debt.

Political Turmoil Continued in Spain. Demonstrations continued in Spain, this time to reject the independence referendum by Catalonia, which was passed earlier this month by a majority of those in the region who voted (turnout was 43%), but was also declared illegal by the Spanish government. Supporters of Catalan independence had been taking to the streets in large numbers both leading up to and following the vote, which the opposition boycotted in large numbers. Subsequent declarations of independence by Catalan separatists and the counter-move by the Spanish government to replace separatist-affiliated officials in government had frayed nerves as tensions escalated over the weekend. European markets seem nonplussed by all the turmoil, as consumer confidence, growth and equities markets continue to rise.

What to Watch This Week: A torrent of market moving events and data releases lie in the week ahead: President Trump’s likely announcement of his nominee for the next Fed Chair, the November FOMC meeting where the Fed is expected to sound the all clear for a 0.25% December rate hike, the October Jobs report which will likely reveal a post-hurricane surge in hiring and last but not least, the release of the Fed’s favorite inflation gauge. Markets will be on edge all week, waiting for the next event to occur or set of economic data to drop.

And oh, by the way, this all comes at a pivotal time when the 10-year Treasury has recently broken above the psychologically important 2.40% threshold and traded to a seven-month high of 2.48% last week, all while 1-month LIBOR steadily approaches 1.25%.  With yields entering new, elevated ranges, markets are bracing for more volatility as they seek greater clarity on where interest rates are headed for the remainder of 2017. This week’s events should lend greater confidence to establishing a long-term view on the course of rates, but until the week’s done, it’s a frightening time to make a bet either way.

Take Away: Don’t be caught off guard by what’s likely to be a very positive jobs report this Friday. After the September jobs report revealed a post-hurricane loss of 33K jobs, we’re expecting this Friday’s October jobs report to come in near 350K, as individuals returned to work and rebuilding efforts helped to more than make up September’s shortfall. If our forecast is correct, job creation will remain on or slightly above trend, but not far ahead as this Friday’s headline number could imply.

What will this week’s data and event dump mean for rates in the near term? While no one expects the Fed to hike rates this Wednesday, it’s now looking like a 0.25% hike in December is a done deal. Don’t expect the Fed to hike again soon after the start of next year however, despite its official plans of hiking three times next year and twice in 2019. Why? While economic data has recovered nicely after the hurricanes and attest to the robustness of America’s economy, storm related lifts in inventories and trade – the real drivers of the positive GDP number – look frothy and won’t be repeated in Q4. 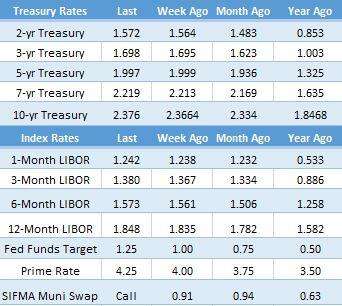 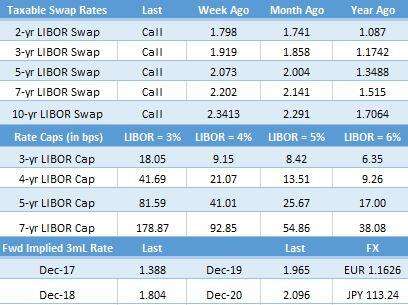 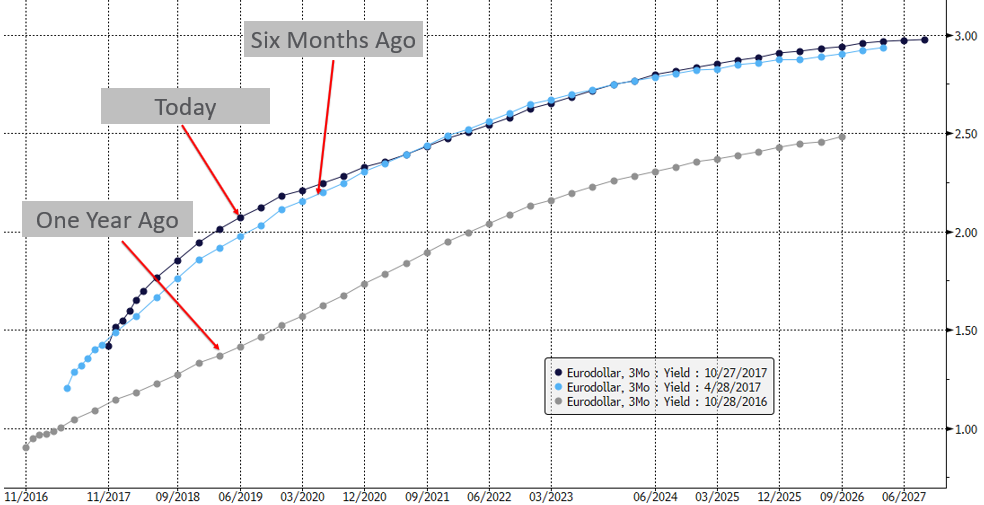 Click here for more DL Reports
Momentum Building for a December Hike The Flat Yield Curve: A Growing Disconnect Between Markets and the Fed
Scroll to top