What You Missed: Long-term interest rates and equities declined as financial markets continued to come to terms with looming, successive Fed interest rate hikes. The yield on the US 10-year Treasury note rose to a two-year high of 1.87% before settling at week’s end at 1.78%. Short-term rates, like the 2 and 3-year Treasury yield, eased off their recent 2-year highs, but remain elevated. Elsewhere, a barrel of West Texas Intermediate crude oil hit a seven-year high near $85, while the US Dollar and Gold both strengthened. Treasury yield Volatility, a key driver of the cost of rate caps, swaptions, and other option-based derivatives, also eased off its recent highs but remained near a 2-year high.

US home sales fell. According to the National Association of Realtors, closed sales of previously owned homes declined 4.6 percent in December to a seasonally adjusted yearly pace of 6.18 million units. Year over year, sales were down 7.1 percent. Sales for the whole year of 2021 totaled 6.12 million, up 8.5 percent over 2020, making it the best year for sales since 2006. At the end of December, there were just 910,000 properties for sale, down 14.2 percent from December 2020. That is less than a two-month supply at the current sales pace, with a balanced market between buyers and sellers averaging a four- to six-month supply. The entire supply is at its lowest point since the NAR began tracking them in 1982.

Our take: The combination of strong buyer demand amid low housing inventories, a continuous rise in the cost of building materials, worsening skilled labor shortages, and rising mortgage rates suggest that housing affordability will worsen in 2022. While that’s all well and good for rising rents and the multi-family sector overall, rising, and sustained increases in housing costs are poking another hole in the narrative that inflation will soon fade as pandemic-induced pressures ease.

Housing costs account for nearly one-third of the most widely watched gauge of inflation, the Consumer Price Index (CPI). Several rent measures have skyrocketed in the last year, with several currently climbing at double-digit rates. The CPI will not completely reflect these rises for at least a year, if not longer. If historical trends hold, the key CPI components that reflect housing expenses could rise 6% to 7% by the summer, quicker than at any point in the last 30 years.

From the Fed’s perspective, the surge in rents have a couple of undesirable consequences: First, the rise in rents will help to keep overall inflation, as measured by the CPI, elevated. The longer that headline persists, the higher the risk that it will permeate household and corporate consciousness, laying the groundwork for a typical wage-price spiral, where rising wages increase consumer’s disposable income, which then raises demand for goods, causing prices to rise further. Those rising prices increase demand for further wage hikes, which then leads to higher production costs and further upward pressure on prices, creating a conceptual spiral. Third, rent increases may reduce tenants’ capacity to spend on other things, potentially depressing an already bumpy post-pandemic economic recovery.

The bottom line? The Fed’s ultimate goal is to keep a transient spike in inflation from becoming permanent, whether it comes from housing or elsewhere. The scenario supports calls for Fed rate hikes, and sooner rather than later.

NY Empire State Manufacturing index plunged – is it a sign of waning demand and a short-circuit to inflation?  The Empire headline plummeted to -0.7 in January, from 31.9 prior, far weaker than the consensus expectation of a drop to 25.0. New orders contracted (-5.0 vs. 27.1 prior), unfilled orders rose less broadly (12.1 vs. 19.0 prior), and shipments stalled (1.0 vs. 27.1). Supply-chain delays were the least broadly felt since July 2021. The index, widely watched by professionals and investors for insights on the state and direction of manufacturing in the influential New York state region, implies that the steep wave of omicron infections left a bigger mark on demand (versus supply).

Our take: Be careful not to take one month’s worth of data and imply a trend. The index is a gauge of general business conditions, which will likely bounce back once the initial Omicron shock dissipates, bringing rising prices and shipping delays in focus again.

What to Watch This Week: The focus is on the Fed’s monetary policy meeting, which concludes on Wednesday.  The Fed starts the new year needing to re-establish its credibility to keep inflation – now running at a 40-year high – under control. Since its tilt toward tighter monetary policy began last October, the Fed has been quite agile, doubling the pace of its bond taper, pulling its planned date for rate hikes forward, and increasing the number of expected rate increases.

The Fed’s long-standing tradition of providing forward guidance well ahead of any policy shift counterbalances its newfound agility. The challenge for Chair Powell this week is to signal a March rate hike in a way that gives the Fed legroom to move aggressively – maybe even to the tune of a 0.50% hike – without spooking financial markets and snuffing out the economic recovery. The Fed will have to tread carefully with the mood remaining fragile (consumer confidence, Tues.; U of Michigan consumer sentiment, Fri.) and activity down (Q4 GDP and durable goods orders, Thurs.) owing to the omicron wave.

However, the Fed would be wise not to tread too carefully. A few days after the FOMC meeting, the Fed’s favored price and wage indicators (ECI and PCE deflator, Fri.) will be released, with both expected to reflect rising inflation pressures. Despite rising mortgage rates (new house sales, Wednesday; pending home sales, Thursday) and a slowdown of housing price growth, home sales will likely remain strong (Case-Shiller, Tues.).

Big Picture: The Fed is walking a tightrope as it prepares the framework for a series of interest-rate hikes that may begin as early as March. They’re responding to requests to slow the sharpest consumer price inflation in 40 years, while also avoiding the appearance of punishing employees at a time when they have unprecedented bargaining power, which is largely viewed as long overdue.

One way for the Fed to accomplish this is stick with the inflation expectations hypothesis, which has dominated mainstream economics since the 1980s. The notion is that if a central bank can persuade companies and consumers that inflation will remain low and steady, it won’t need to do much else. This is because inflation is assumed to be driven in part by predictions about where prices will go, e.g., workers won’t seek higher wages to compensate for their decreased buying power if they don’t expect higher inflation. They also won’t rush out to buy products because they expect prices to rise, resulting in a self-perpetuating upward spiral. That was the Fed’s error in the 1970s: it lost control of the public’s inflationary psychology to the point that managing inflation ended up requiring frequent and large interest-rate hikes, plunging the economy into recession, and throwing millions out of work.

The coming round of rate hikes is aimed at preventing just that; they aren’t really intended to quell today’s high inflation but are intended to prevent today’s inflation from becoming tomorrow’s.

We’re skeptical that the Fed can quell inflation without also hurting the jobs market, as there’s no sort of direct and painless way of influencing inflation without affecting something else in the economy. In short, the Fed’s toolbox is full of blunt instruments that, when used, often have unintended consequences. Rather, it’s more likely that any Fed tightening this year will slow the fall in the unemployment rate but won’t have much impact on inflation until next year, due to lingering but substantial supply bottlenecks amid swirling virus infection fears. By that time, inflation will likely have mostly vanished on its own: consumer’s excess cash piles will have evaporated, pandemic fears will have receded, allowing supply networks to untangle. It’s a scenario that will likely result in the Fed hiking less than the 3-4 four times that the markets expect this year. 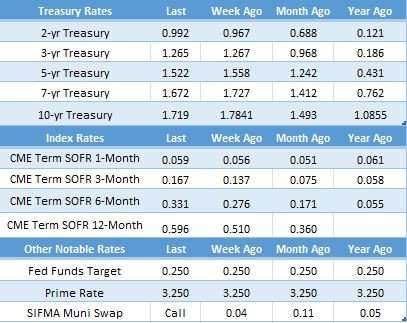 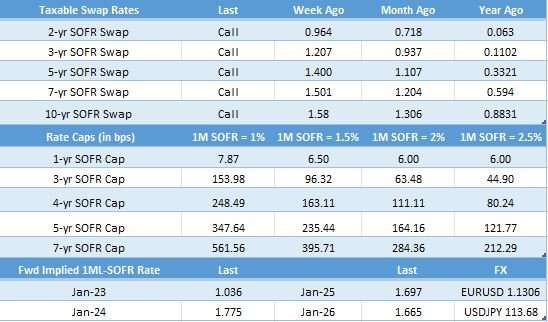 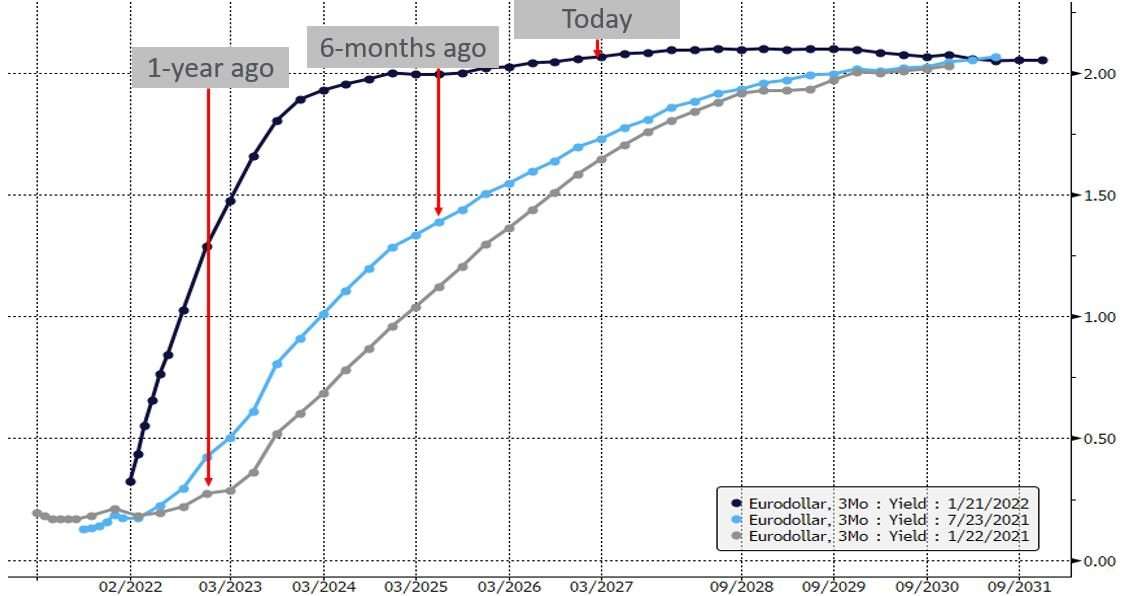 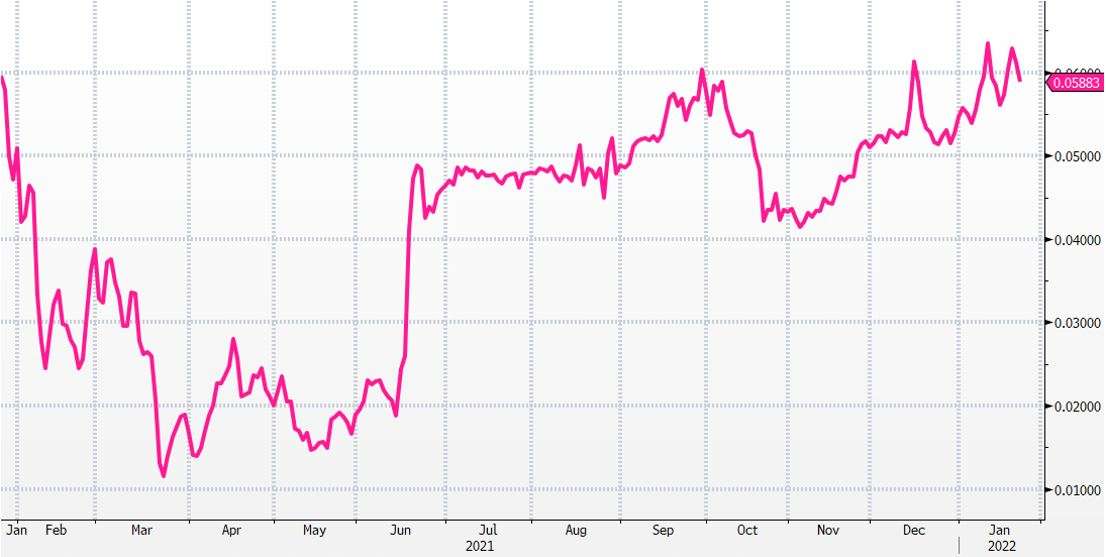 Click here for more DL Reports
Will the Fed Hike as Much as Markets Believe?