Last Week: Interest rates and equities were higher on the week as a risk-on rally received additional fuel from news that the US labor market is beginning to bounce back. The yield on the benchmark US 10-year note soared 26 basis points – the most since September – to 0.92%, as investors left the safety of government bonds, while 1-month LIBOR drifted 1 basis point higher to 0.18%. Now that the easing of COVID-19 lockdown is in full swing in most states, expectations of improving demand pushed the price of a barrel of West Texas Intermediate crude oil to $39.10 from $33.50 a week ago, as the US Dollar and Gold both fell. Treasury yield volatility, a key driver of rate caps and swaptions, rose modestly to 4.71 from 4.61 this time last week.

Blowout jobs report underestimates the wage gap. The US labor market apparently bottomed out in April, a month or so earlier than expected, and rebounded in May, adding 2.5 million jobs, and beating expectations by more than 10 million positions – a record. The job gains were broad based, with nearly half coming from the hard-hit leisure & hospitality sector. All major segments added jobs, except for three: mining and lodging, transportation and warehousing, utilities and information, which continued to shed jobs in the month. The US unemployment rate declined to 13.3% in May from 14.7% in April, beating the consensus forecast of a rise to near 20%. Average hourly earnings (aka wages) plunged by 1.0%, normalizing from artificially elevated growth in March and April. Despite the broad-based improvement, when compared with weekly jobless claims data, a significant gap between wage income growth and its recent trend suggests that a recovery in the labor market will be more protracted than last week’s headline statistics suggest. As such, an additional round of fiscal stimulus, directly aimed at supporting the labor market, will likely still be needed.

Rates jumped in response. The better than expected jobs numbers drove a moderate rise in Treasury yields, with the 10-year yield up 5 basis points to 0.92%, coupled with a 2 basis-point increase in the 2-year yield to 0.22%. The entire Treasury curve continued its steepening slant; the spread between five-year notes and 30-year bonds widened on Friday to 126 basis points, a level unseen since December 2016. The moves added to what is already the steepest Treasury yield curve since the pandemic-driven market panic started more than two months ago.

Why it matters: The rate on that 7 or 10-year loan may be moving higher. Traders are betting short-to-medium term rates will be anchored at ultra-low levels by Fed stimulus, including potential steps such as capping yields, aka Curve Sculpting.  At the same time, the steepening yield curve gives an indication that longer-term rates, like the 10-, 20- and 30-year Treasury yields, may be headed even higher as more green shoots of economic recovery emerge. The massive sales of new Treasury bonds by the US Treasury to pay for all the fiscal stimulus is only adding momentum to long term yields’ push higher. Need a primer on yield curves? Find it here: The Yield Curve: What You’ve Always Wanted to Know but Were Afraid to Ask

Interest rate swaps: a public service announcement. We have been receiving an overwhelming number of calls lately – probably more than ever – from borrowers considering interest rate swaps to mitigate against floating interest rates rising over the long-term. In many of these conversations, the borrower is at the mercy of their bank that is offering the “best” hedge to lock in historically low rates. While aspects of a swap may be beneficial or convenient on the surface, they may add risk, additional costs (swap fees), or limit future flexibility. Many borrowers are also dealing with amendments and forbearance complexity as their loans experience the COVID-19 shock. We can’t stress enough how important it is to seek independent advice to help clarify what’s being offered, and more importantly, to ensure borrowers have a comprehensive understanding of all the costs and risks involved. The bottom line: The bank is trying to sell you something. It’s your job to understand it. Do you? Ask us how you can mitigate interest rate risk and still maintain flexibility under these uncertain times.

What to Watch This Week: Don’t be fooled – the stunningly positive May jobs data by no means implies the economic crisis is over or that the economy is firmly on the road to recovery. To the contrary, the latest job statistics highlight the importance of the need for a timely and sizable fiscal policy response and the need for additional measures in the second half of the year – directly aimed at supporting the labor market. Remember, even though last week’s jobs report showed that 2.5 million jobs were created, there are still tens of millions unemployed. An unemployment rate at 13.3% is well above the peak of the last recession and will strangle consumer demand and corporate revenue growth.

To get consumers – the main driver of any economic recovery – really spending again, the unemployment rate must fall below double-digit levels. For that to occur, we will need to see a narrowing of the huge gap between  current income levels and their pre-pandemic trend. The only way this can happen quickly – by the end of the year specifically – is with more government assistance in the form of augmented unemployment benefits. Consumers were the engine of economic growth before COVID-19; they will remain the key engine of economic growth in the recovery.

As such, the main event of the week is the Wednesday’s Federal Reserve’s FOMC monetary policy meeting. Fed Chair Powell is expected to repeat that the Fed is ready deploy its full suite of liquidity and stimulus backstops when he addresses reporters in the post-meeting press conference, even if there is seemingly little need for them at the moment. There’s little chance the Fed will contemplate moving rates off the zero-bound until the unemployment rate returns to the 4-5% range, a scenario we will not see until 2022 at the earliest. The Fed’s other unconventional policy measures will be unwound sooner, but policy makers are presently focused on doing more, not less. The Fed’s emergency pandemic lending programs are just getting started.

On the data front, the week’s releases will highlight intensifying deflationary pressures, with the Consumer Price Index (CPI) release on Wednesday and the Producer Price Index (PPI) report on Thursday. The risk at present is that with inflation pressures already muted prior to the pandemic, a moderate bout of disinflation could push the economy close to the brink of deflation. More on that in the weeks ahead.

Big Picture: The employment number surprised all of the experts, and that means something is off.  The distortion, most experts agree, is how the Labor Department data categorized a worker who is employed, but not working. For experts to admit they were wrong is to figure out whom to blame. Let’s give some credit to the Labor Department given the current challenges by disclosing why the data might be skewed. One good number is simply a data point and not a trend.  The focus going forward should be wage growth. At the moment, high wage earners seem to be weathering the storm, but this might not last.  In this economy, flexibility is of the upmost importance.  Call us to discuss how to mitigate interest rate risk and learn the best methods to remain flexible in a highly uncertain environment.

Suddenly, 10-year Treasuries at 0.69% look like a distant memory. The benchmark yield rose 10 basis points last Friday, jumping from 0.86% to as high as 0.96% in the minutes following the blowout jobs report before settling back to close the week. In hindsight, as Treasury yields in February and March fell so far, so fast, this move higher showed there’s life still left in the market. Expect more volatile trading ahead – and higher rate cap and swaptions costs – if incoming data in the coming weeks confirm the narrative that the U.S. economy is on track to rebound faster than expected. Yes, last week’s jobs report was encouraging no doubt, but it was one of many such reports. Rest assured that there will undoubtedly be many twists and turns in the great reopening of America. One good economic number is just a data point and not a valid reason to change course – yet. 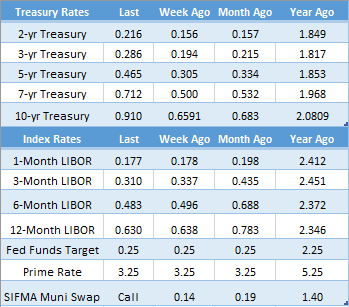 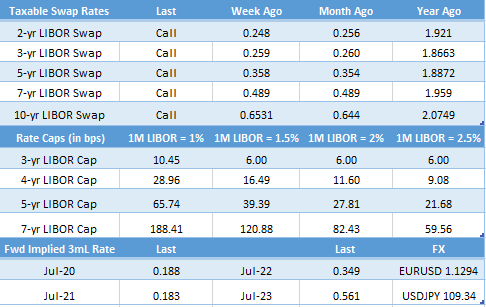