Last Week: Interest rates backed off their recent highs, settling into a holding pattern amid the much anticipated 0.25% rate hike by the US Federal Reserve. The yield on the US 10-year note slipped to 3.07% after peaking at 3.09% early in the week. 1-month LIBOR moved in lock-step with the Fed’s increase in the Fed funds rate, peaking at 2.26%, well above the 2.22% seen early in the week.  Oil also continued its sustained ascent, rising $1.51 a barrel to $73.59 amid lingering concerns over supply disruptions from Venezuela and Iran along with increased demand and prompting some to call for a $100/bbl before year’s end.  The US Dollar strengthened, and Gold weakened. Treasury yield volatility, as measured by the Chicago Board Options Exchange Treasury Volatility Index (TYVIX), fell to 3.34 from 3.71 early in the week.

The Fed pressed ahead with a 0.25% hike, and increased expectations of another in December. Via its accompanying statement and economic projections, it suggested that Powell & Co. will raise interest rates at least two and possibly four times between now and the end of next year. We’re doubtful we’ll see that many hikes however, given that the sugar high of tax reform will surely fade by mid-2019, and higher rates will begin to bite at around the same time, prompting us to expect only two-more hikes next year, with Fed Funds peaking somewhere in the 2.75-3% range mid-2019.

The Fed removed the long-standing word “accommodative” in its post-meeting official statement. The nearly omni-present word in Fed meeting statements since the financial crisis of 2008 told markets the Fed was standing at the ready to pump low-cost funds into the economy in an effort to stimulate activity. Nearly 10 years on, the word was finally removed last week, signaling that FOMC members recognize that the Fed Funds target rate has now moved into neutral territory, and at 2.25%, is neither stimulating nor restraining economic activity. In addition to language changes in the meeting’s accompanying statement, the Fed also upped its median GDP growth projections, now at 3.1% this year and 2.5% in 2019, up from 2.8% and 2.4% previously. This shift reinforces the Fed’s view of a strong domestic economy, a tight labor market, and on-target inflationary pressures.

US and Canada reached a trade deal sealing NAFTA 2.0. Taking one aspect of uncertainty off the table, the deal, which includes Mexico, would keep NAFTA trilateral. What did we get from all the trade-related drama? Not much it seems. Thus far the deal looks to be a re branding of the old NAFTA agreement, along with a handful of provisions from the 12-nation
Trans-Pacific Partnership President Trump pulled out of on his first full working day in office.  While all the details remain scant, enough have been released to tell markets that the new agreement probably imposes more regulatory demands on specific industries (e.g. automakers) and ends up hurting rather than helping North America’s competitiveness versus rivals like China.

As traders jump on the $100/barrel oil bandwagon, what would $100 oil mean for interest rates? The short answer is not much, and not what it used to, thanks to the boom in US shale oil production. However, if a sustained rise in oil feeds into higher inflation, central banks globally, and notably the Fed, would have one less reason to keep rates low. Given the cushion the US enjoys from its own domestic oil production, we’d expect to see oil-driven rate hikes only from the likes of countries that have a high dependence on it with no offset, like India, Thailand, Indonesia, the Philippines and South Africa.

What to Watch This Week: The main focal point of the days ahead is public activity by Fed officials as well as the September jobs report.

Following last week’s monetary policy meeting, Fed officials will be out in force, making speeches all over the country to hammer home an implied expectation of a fourth rate hike this year – likely in December – while trying to clarify the Fed’s path for next year.  While the broad expectation is for three rate hikes in 2019, there are equal-sized camps anticipating both two and four hikes.

Regarding economic data, Friday’s September jobs report will take center stage, but its relevance will be second guessed due to Hurricane Florence-driven distortions in data on both the number of new jobs created as well as average hourly earnings (aka wages). After average hourly earnings touched a cyclical high in August, promoting pundits to claim inflation is finally on the rise, it seems markets will have to wait until the hurricane clouds clear from the data before figuring out if that is in indeed the case. We expect that 180K new jobs were created last month regardless, and that any reduction in job creation last month will likely be made up in a few months as reconstruction efforts boost overall employment.

Take-Away: After last week’s Fed meeting, the accompanying statement and updated economic projections to the upside, it’s now clear that short-term rates will continue to rise as we have expected, at least through mid to late next year as the economy adjusts to fading fiscal stimulus and trade frictions, yield-curve flatness, the second-half of 2018 growth profile, and even the economic effect of the midterm election results.

For now, we’re sticking with our forecast of another hike in December, followed by only two more hikes next year as the sugar high of tax reform fades and higher interest rates begin to bite at around the same time, with Fed Funds peaking at somewhere in the 2.75-3% range mid-2019. Further out, as economic growth slows below its potential rate mid to late next year, the Fed will begin contemplating cutting rates by early 2020. 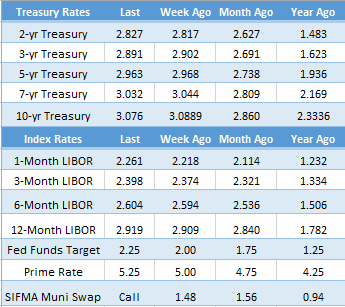 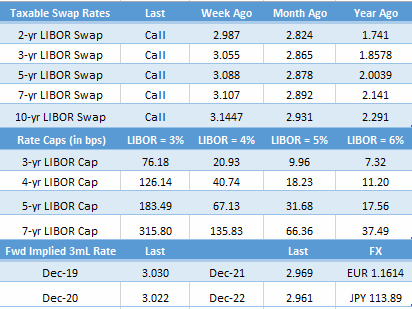 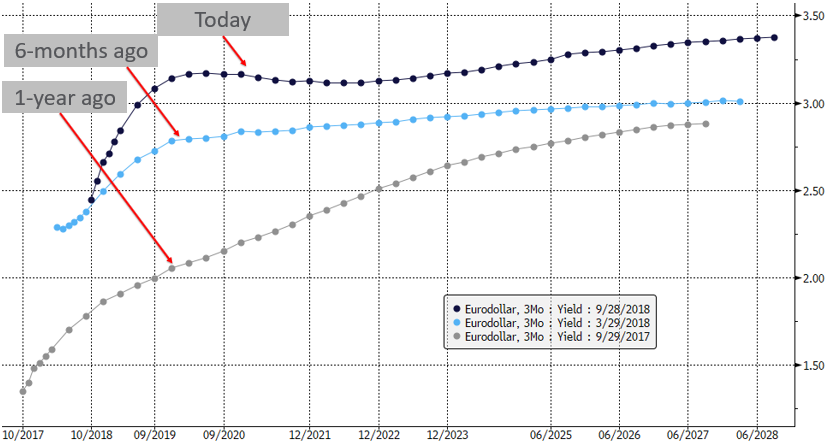