Fed Isn’t Coming To Save You

What You Missed: Long-term interest rates fell, and equities were lower on the week, with the fallout from stubbornly high inflation dominating financial markets’ psyche. Investors favored traditional safe havens for the first time in a while, pushing the yield on the US 10-year Treasury note down from its intraweek high of 3.20% to 2.82% on Thursday before rebounding to 2.91% on Friday. Short-term rates, like 1-month Term SOFR, logged consistent increases throughout most of the week to 0.80%, on the back of broad expectations of another 0.50% Fed rate hike in June. Elsewhere, credit spreads widened, the US Dollar strengthened, and Gold weakened, while the price of a barrel of West Texas Intermediate crude oil changed little from a week ago, wrapping the week at $108.60. Treasury yield volatility, a key driver of the cost of rate caps and other option-based interest rate hedges, fell throughout the week but remained near 2-year highs.

Will sky-high rate cap costs ever go away? We get asked this question almost everyday. One of the key drivers of the cost of rate caps – along with a steep SOFR forward curve –  is the volatility of rates, which has played a key role is driving the cost of rate caps to levels not seen in a long while. Rates volatility typically declines when a central bank starts a rate hiking cycle, then calms once the policy path becomes clearer. At this stage of the game, the wide range of potential Fed outcomes is reflected in elevated levels of volatility. However, this high level of volatility isn’t sustainable over the long term, and will calm once we get past another Fed meeting or two, and the outlook for what the Fed will do becomes clearer.

Consumer-price gauge suggests inflation has peaked. Fears that economic growth will sag were front and center last week driving the continued sharp decline in equity prices. With the Fed expected to hike rates aggressively, at least through the next quarter, investors are increasingly concerned that the rapid sapping of stock market driven wealth could soon cause consumers to retrench and tip the economy into recession.

Fresh inflation data was the catalyst. Consumer prices  – via the release of the Consumer Price Index (CPI) – rose 8.3% year over year (0.3% month on month) in April, holding close to four-decade highs amid a broadening of price pressures across both goods and services. Translated to PCE inflation, the Fed’s preferred inflation gauge, headline inflation would be around 6.6% on a 12-month basis.

Core CPI – a more indicative gauge of the underlying inflation trend – accelerated sharply last month, led by rapid services inflation and an increase in car prices. Core CPI rose 0.6% month on month (vs 0.3% prior), corresponding to a year-on-year rate of 6.2% (vs 6.5% prior). This decline in the rate of acceleration provides a glimmer of hope that inflation may be beginning to moderate. If the trend continues, the Fed’s rhetoric on tightening will also moderate, to be followed by smaller and less frequent rate hikes than markets currently expect. Time will tell.

The latest inflation report and ensuing market fallout begs the question: is inflation hotter than expected or is it moderating? If one focuses on year-over-year inflation comparisons, as most financial news headlines do, you’d be comparing a period where the Fed said inflation was transient, to now, where the Fed says inflation is running too hot. That’s a big gap in opinion. Looking at inflation on a month over month basis instead may yield a more accurate picture. Why? Consumers react quickly to changes in price, as they go through their lives buying gasoline, groceries, services and the like. Therefore, measuring inflation changes from one month to the next is likely more accurate method of gauging how current price changes will impact consumer behavior, and by extension- how economic growth is faring in the midst of high prices (since consumer’s spending drives roughly 70% of US economic activity).

Our take: Looking ahead, we suspect that energy and food prices, autos, and prices for services will keep inflation high in May and beyond. Though falling energy prices helped take the edge off consumer prices in April, they’ll likely have the exact opposite impact in May as Europe moves closer to an oil embargo on Russia. Also helping to keep inflation high will be a widespread constrained supply of goods due to companies’ difficulty in building up inventories because of China’s COVID lockdowns and the seemingly everlasting  global supply-chain bottlenecks.

On the flip side, demand for consumer durable goods, which was boosted by the pandemic, will continue to fall, but won’t fall fast enough to counter both the supply restrictions and growing service inflation, keeping inflation high overall for months to come.

Bottom line? While peak inflation may be in the rear-view mirror, any real decline in inflation from a 40-year high will be slow as molasses. We think we’ll continue to see a 6% percent inflation handle as late as Q4 of this year, keeping the Federal Reserve on track to raise rates at least a couple more times this year.

Producer-price data implies that inflation has peaked. Producer prices, via last week’s release of Producer Price Index (PPI) data, increased more slowly in April than in the previous month, and slowed from a year earlier. Headline PPI decelerated to 0.5% in April following a 1.6% gain in March. The reading matched the consensus forecast.

Our take: While one month’s worth of data certainly doesn’t make a trend, the PPI data adds to evidence that producer and consumer inflation may have peaked, bolstering expectations that cooling demand for goods should begin to limit price increases in commodities, like oil and gasoline. Slower economic growth in China will likely dampen demand-driven inflationary pressures. Offsetting this however, the Covid lockdown in Shanghai threatens to worsen supply-chain tensions and inflation concerns. Overall, if the downward trend in PPI continues, combined with declining demand for goods (versus services) in the US, equating to an slow erosion of sorts of the forces driving inflation higher, then the need for continued aggressive Fed rate hikes throughout the year comes into question.

Consumer Sentiment data hint at an increasingly cautious consumer. As gasoline prices rose to new highs in early May, the University of Michigan consumer sentiment index – a measure of the overall health of the economy as determined by consumer opinion – fell to a new cycle low. The latest report shows that consumer confidence is still dominated by inflation expectations. According to the preliminary May data, buying conditions for durable goods fell to their lowest level since 1978, owing to high prices. Consumers’ assessment of their current financial situation relative to a year ago is at its lowest reading since 2013.

Our take: The consumer sentiment data comes ahead of April retail sales data, which we expect to show a drop in consumer’s discretionary spending as inflation forces people to spend more on necessities like food and gas. Again, while one month’s worth of data does not make a trend, the consumer sentiment data hints at the possibility that consumers are beginning to reconsider frivolous purchases as rising costs blunt the positive impact of higher wages. All told, if the current data turns into a trend, it will force the Fed to reign back any plans of a sustained path of sequential interest rate hikes, for fear of over tightening and cratering the economy in the process. Judging by the losses in equity markets alone, we’re sticking by our belief that the Fed will hike 0.50% in both June and July, then pause to reassess.

What to Watch This Week: The data and event calendar in the days ahead may provide any signs of cooling consumer demand. Regional factory surveys (Empire Manufacturing Index, a gauge of the state and direction of manufacturing in the influential New York state region, Mon. ; Philly Fed, a measure of regional manufacturing growth, Thurs.) are expected to show slower order growth and worsening business prospects. As high prices constrain consumers’ discretionary spending, retail sales ex-vehicles and gasoline (Tues.) may show scant growth in April.

The economy is normalizing. After two years of extravagance during the pandemic, demand for goods is softening. Weakening demand for goods has kept inflation from rising to even higher levels as supply-chain bottlenecks worsened amid China’s Covid shutdown and Russia’s war on Ukraine. Consumer demand will likely fall steadily throughout the rest of the year as higher prices begin to bite, implying continued price moderation, if not outright deflation, in several consumer-goods sectors.

Another thing to keep an eye on this week is whether Treasury yields keep falling in concert with stocks. If they don’t, which would be a carry over from last week, then its a signal that yields may have topped out for the near term as economic growth fears bleed into the Fed’s tightening psyche.

Big Picture: Markets are still coming to terms with a significant regime shift: from a low-inflation, low-rate, negative-real yield environment to a high-inflation, higher-rate, positive-real yield one. Taking a look back, in the post-financial crisis period of 2008, investors became accustomed to the Fed altering its policy mix in response to market pressures – the so-called “Fed put”. However, those actions took place during a low-inflation cycle. With inflation now running at a forty-year high, the Fed put is therefore likely deeply out of the money, and the Fed isn’t coming to save us this time for sure.

However, it’s important to keep in mind that corporate and consumer balance sheets remain strong, inflation is expected to moderate as supply chains untangle and reorient over time, and the job market will remain historically tight, suggesting the potential for fewer-than-normal layoffs in the event of an economic slowdown. The icing on the cake? The recent equity market selloff has pulled down lofty valuations; a good thing as we re-orient toward a brighter future.

For interest rates, the billion-dollar question now is just how much the inflation situation will improve and how quickly.  The Fed will require a considerable passel of evidence corroborating any easing of inflation before it steps back from rate hikes, which means the highly probable outcome for now are 50-basis-point increases at each of its next two policy meetings in June and July. 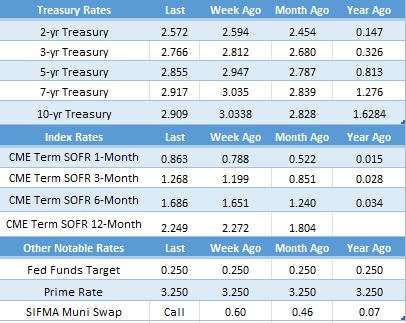 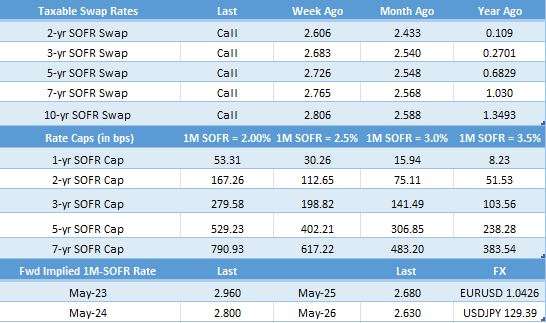 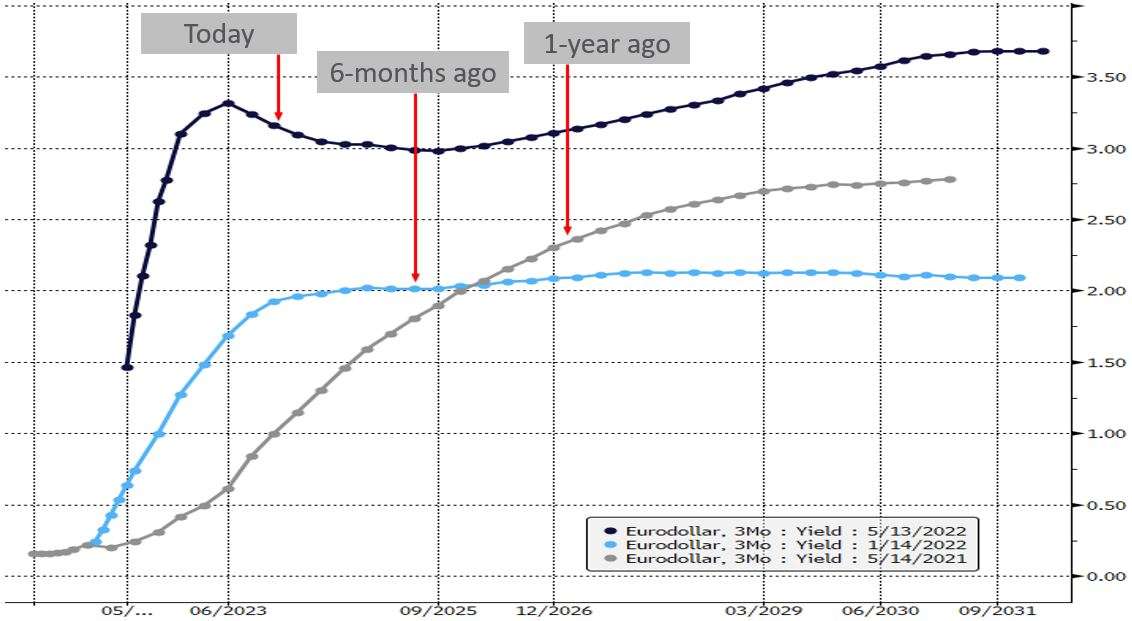 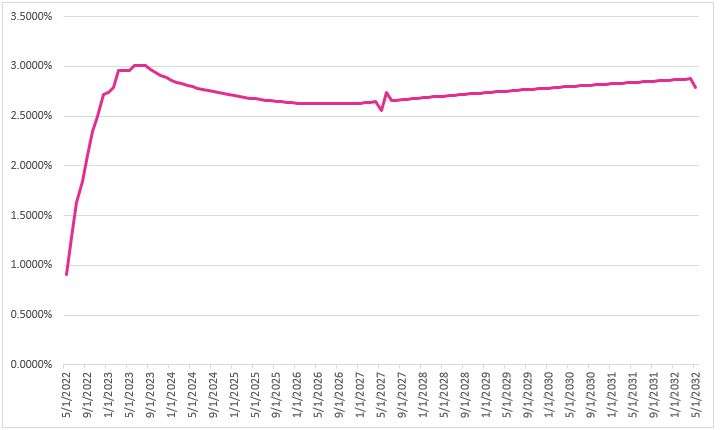 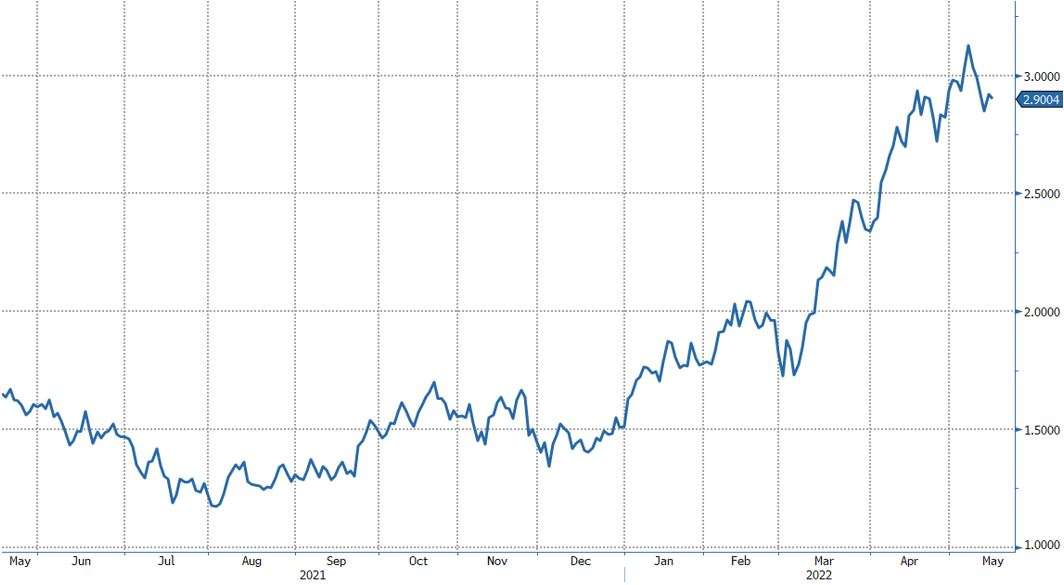