Last Week: Interest rates fell, and equities rose thanks to better than expected US corporate earnings, a strong October US jobs report and a glimmer of progress on the US-China trade war front. The yield on the US 10-year Treasury note fell 10 basis points to 1.71%, as 1-month LIBOR fell three basis points to 1.77%, both moving on the back of a new impression that the Fed is on hold for the foreseeable future. Oil fell one dollar to $56.35, as the US Dollar weakened and Gold strengthened. Treasury yield volatility fell to 4.08, from 4.88 this time last week.

America’s job creation engine is humming – but at a slower speed. In what is historically the single most impactful economic data point for interest rates, nonfarm payrolls expanded by 128K in October, showing impressive resilience and far exceeding expectations for a rise of 85K. The jobs gains came despite a 40-day General Motors strike and layoffs of 2020 Census workers. Revisions to the prior two months’ data added an additional 95K positions to the tally. The unemployment rate ticked up a tenth of a percentage point to 3.6% – just shy of the lowest level in half a century – while consumers’ hourly earnings expanded at a 3% YoY rate, comfortably outpacing inflation. The number of new nonfarm jobs, while beating expectations, was the weakest in five months, corroborating our view of a slowing, but not collapsing, pace of US economic growth.

US economy slowed less than expected in Q3. The US economy expanded at a 1.9% pace in the third quarter, faster than the median forecast of 1.6% but below Q2’s 2% rate. Consumer spending was responsible for nearly all of the expansion, with the contribution from business and government flat on the quarter. With consumers now single-handedly driving economic growth, any slowdown in hiring or incomes pose significant vulnerability to America’s economic fortunes in the coming months. Therefore, all gauges of such will be front and center through the rest of the year.

Key metric confirmed a US manufacturing recession. The ISM factory index – a widely viewed gauge of the health of the manufacturing sector – posted a contraction for the third straight month, cementing the sector’s recessionary state. As a result, further declines in factory employment are likely as companies continue to suffer from slowing global growth and broad economic uncertainties. Why you should care: While America’s factory woes aren’t welcome, they aren’t enough to topple its overall economic momentum. Regardless, it doesn’t bode well for new factory jobs.

Fed cut rates but dialed back expectations of more. America’s central bank cut its target range for the federal funds rate to a 1.50%-1.75% range on Wednesday but indicated that it has set a high bar regarding any further cuts. According to the Fed, the global economic backdrop would need to worsen significantly for it to cut rates further. We read between the lines and see the Fed’s communications as creating optionality for itself in future meetings. Given its communication blunder this time last year, which sparked a stock market selloff and a downdraft in Treasury yields, it seems the Fed now seeks a lighter touch to guiding market expectations. The Fed is torn between two conflicting needs: 1) to act swiftly and aggressively to avert a recession, and, 2) with rates already low, to have enough room to cut if a downturn occurs. For now, a seemingly favorable turn in US-China trade talks, a rebound in stocks and a steepening of the yield curve gave the Fed confidence to take its foot off the economic accelerator. It won’t last though; we expect fading economic momentum to manifest more clearly over the next few months, prompting the Fed to cut again, likely in December, and if not then, in Q1 2020.

Phase one US-China trade agreement on track? Negotiators from China and the US stated that the two are on track to conclude a preliminary agreement this month, but leaving the most thorniest of issues unresolved. While any near-term agreement is encouraging on the surface, Chinese officials threw cold water on the two nations reaching a comprehensive long-term trade deal, citing President Trump’s impulsive nature and track record of reneging on agreements with other nations. One act by the President that could change their minds? Rolling back America’s existing tariffs on imports from China, which most don’t see happening anytime soon. In the meantime, the outlook for the Chinese manufacturing sector dropped to the lowest level since February and US economic growth fell to its slowest pace in a year.  Get comfortable, the US-China trade war will be with us well into 2020 and will spur increasing caution from businesses in their hiring and capex decisions.

What to Watch This Week: The days ahead offer a respite from the data and event deluge we witnessed last week. The key event for the week is the ISM non-manufacturing index – mostly a measure of the vitality of the services sector of the economy – on Tuesday, and the University of Michigan consumer sentiment report on Friday.

Other than economic data, Fed officials will be out en masse, hammering home Fed Chair Powell’s “Fed on Hold” message.

Take-Away: After falling the most in a year since 2011, current signals point to long-term yields staying low well into 2020. For the 10-year Treasury specifically, any climb toward 2% will be capped by cooling global growth, low expectations of real progress in the US-China trade war, a teetering European economy and US inflation that’s nowhere to be found – all serving as an anchor on any sustained move higher in yields. 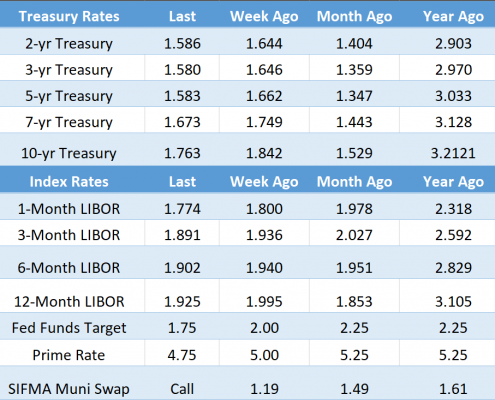 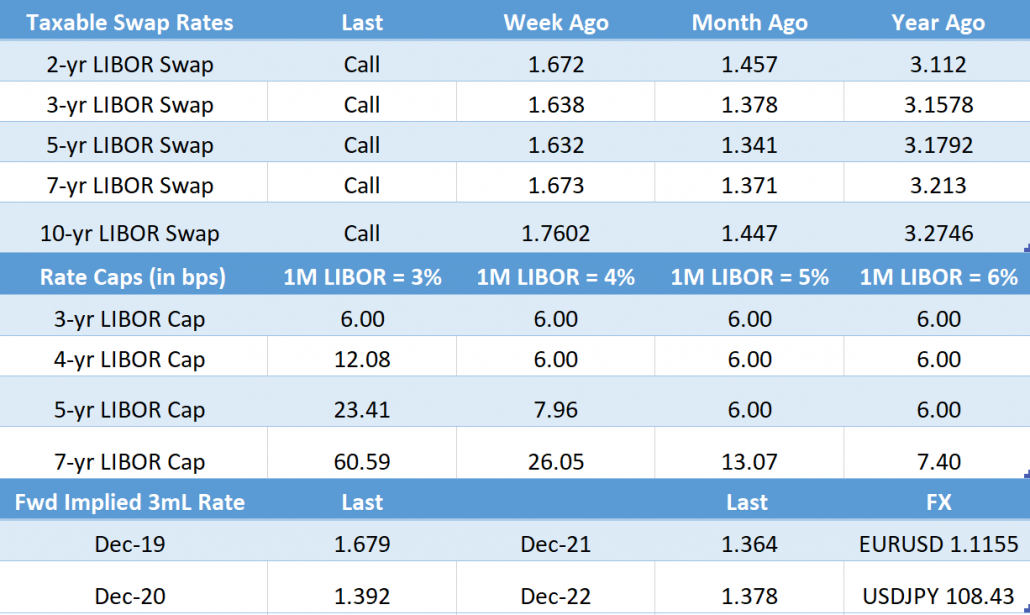 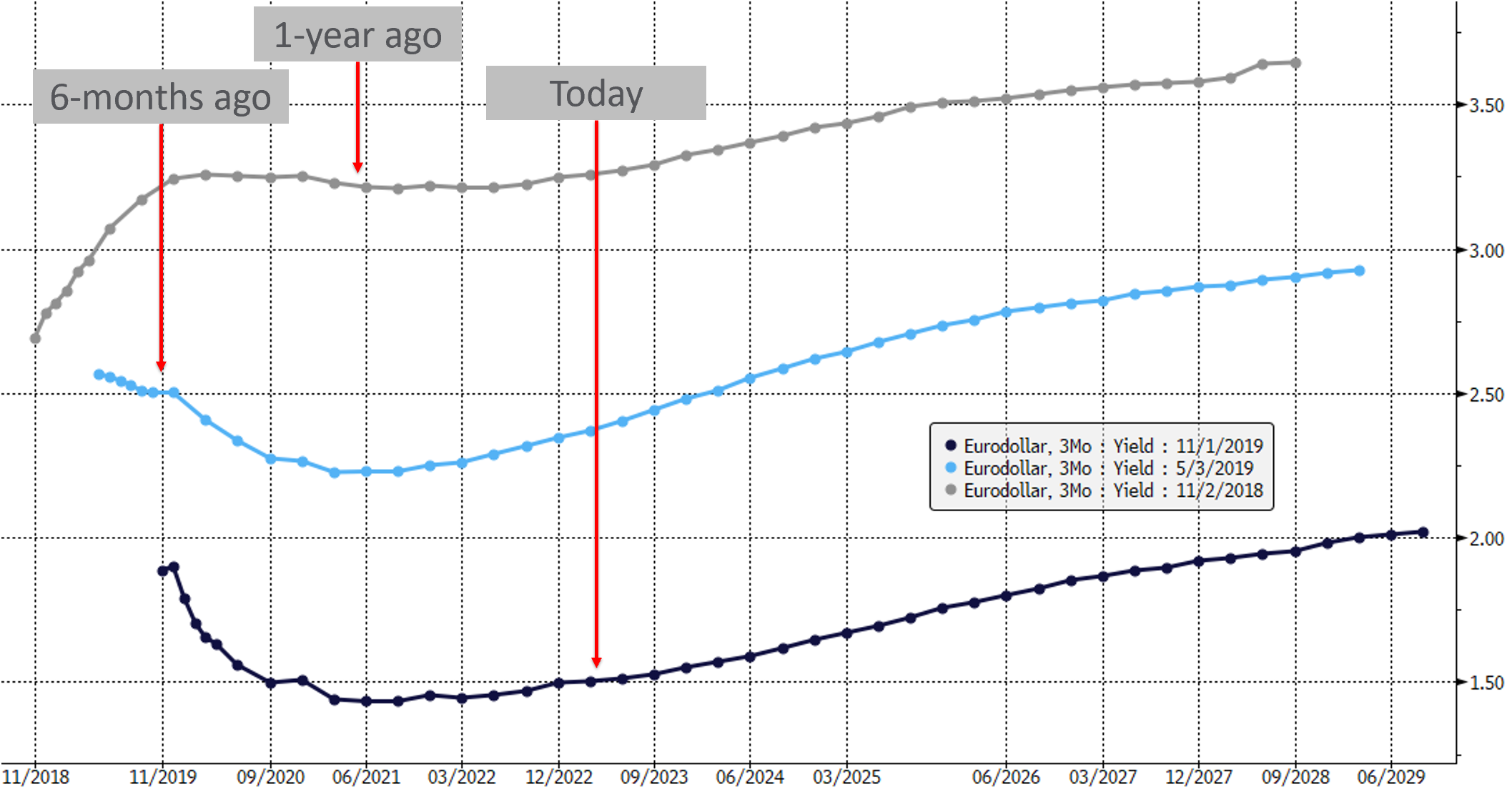 Trade Crumbs To Keep Rates on a Precipice
Scroll to top