Last Week: The chances of a rate hike on June 15 were all but killed by last Friday’s jobs report showing the U.S. economy added only 38,000 jobs in May, versus expectations of 160K. The report muted recently upbeat data on consumer spending and overall growth, and unwound almost three weeks of increased rate hike expectations. The data marked the worst monthly jobs growth in more than 5-1/2 years, as other parts of America’s economy appear to have rebounded from a sluggish Q1. 1-month LIBOR declined by 1 bps to .4648%, while the 10-year Treasury fell 10 bps to 1.7004%.

This Week: It is a quiet week for US data. Second-tier data on labor market conditions, productivity, labor turnover, wholesale inventories and consumer sentiment will do little to sway the markets nor offer much to counter the newly negative sentiment. Dovish Fed voter Rosengren and Yellen are due to speak, events that have gained much greater importance after last week’s dismal jobs data. After this week, Fed speakers are quiet until the Jun 15 FOMC meeting.

Regarding Yellen’s speech today,  it’s unlikely that the Fed Chair will want to destroy weeks of Fed prepping after one round of unexpected numbers. Thus we expect her to maintain a broad focus on the ongoing trend decline in unemployment and improvement in earnings, rather than an overtly dovish message about fresh weakness. If so, that might give the market the necessary excuse, before or after, to pare back some of the payrolls reaction.

Take-Away: As for payrolls itself, the data was clearly more than disappointing across a number of series, but it`s worth remembering that it is not outside the bounds of monthly noise. Last March’s jobs report, for example, logged sub 100k, and the latest number was not too much south of that once you add in the 35k Verizon strikers. Markets subsequently saw payrolls bounce back over 250k the following April, though admittedly there has been more of a trend slowdown over the last three months, on the back of the weak Q1 GDP number.

We’ve pushed our expectations our hike expectations from July to the fall or winter (September or December).  While the May jobs data was abysmal, we’re skeptical that the labor market has slowed enough to stop the unemployment rate from trending down and wage gains and inflation from trending up, both giving room for the Fed to hike at least once before the end of the year.  Jobless claims data will gain more importance in the months ahead, and non-US events, e.g. BREXIT and negative bond yields in many developed economies will continue to keep a lid on rates in the near-term. 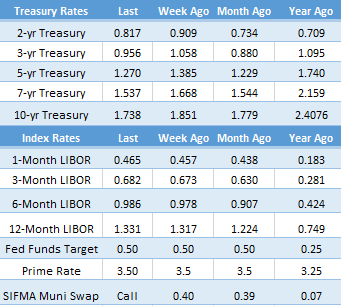 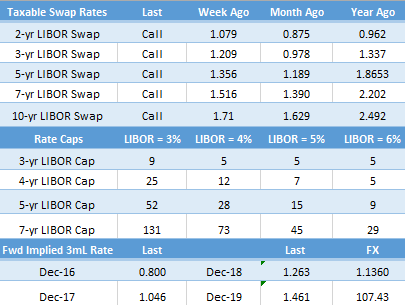