Last Week: US interest rates were mixed, and equities closed at record highs after Fed Chair Powell all but confirmed a Fed rate cut later this month. The yield on the US 10-year note rose 18 basis points from last week, to 2.13%, while 1-month LIBOR fell 5 basis points to 2.330%. European yields mostly rose in similar fashion as markets unwound overly bearish bets on the global economy. Oil rose 50 cents to $60.20, while the US Dollar weakened, and Gold strengthened. Treasury yield volatility declined slightly to 4.20 from 4.36 this time last week.

The Fed prepared markets for an “insurance” rate cut. In his scheduled testimony to Congress last week, Fed Chair Powell all but-guaranteed a minimum 0.25% rate cut at the Fed’s July 31 meeting. Citing the growing weight of uncertainties on cooling global growth and little progress in America’s multi-front trade wars, Powell said that while the economic outlook has not improved in recent weeks, America’s economy is in a very good place and that the Fed wants to use its tools to keep it there. Despite the post-G20 trade truce, the resilience of the labor market and signs of a rebound in inflation, markets anticipate at least a quarter-point cut in the Fed funds rate – which would be the first since 2008 – and place about a 20% probability of a half-point cut. In case you’re wondering, higher odds of a larger cut went out the window in the wake of the recent strong US jobs report.

US inflation data took some shine off rate cut bets. A key measure of changes in US consumer prices rose more than expected in June, evidencing rising costs broadly from everything from shelter, used vehicles, clothing and home furnishings. The news added some complication to now-overwhelming expectations of a near-term Fed rate cut, as rising inflation usually calls for a rate hike. One month of inflation doesn’t make a trend, however. When measured by the Fed’s preferred gauge, inflation was 1.5% in the year through May and has been below their 2.0% target for most of the past seven years. While last week’s inflation data caused some to question the need for an “insurance” aka a just-in-case Fed rate cut, it won’t alter the Fed’s plans to cut later this month in our view.

Treasury yield curve steepened to levels not seen in months. On the back of firming rate cut bets and above-forecast inflation data, the yield curve from 2 to 10 years steepened the most since October. Two-year yields fell to 1.85%, while 10-year rates rose to 2.12%. What does it mean you ask? Remember that when the Fed hikes or cuts rates, it does so via the Fed Funds rate, which is a short-term, overnight interest rate. Short-term yields, e.g. the 2-year Treasury yield, can’t rise much given that a July cut to the Fed funds rate is baked in the cake. However, that reasoning doesn’t apply to long-term rates, like 10-year or 30-year Treasury yields. The expectation of a July Fed cut is causing investors to sell their long-term Treasury holdings, sending yields on the 10- and 30-year Treasuries higher (lower bond prices = higher yields and vice-versa). The short-term rates falling and long-term rates rising dynamic equates to a steeper yield curve. Got it? For a primer on yield curves, check this out – The Yield Curve: What You’ve Always Wanted to Know but Were Afraid to Ask

US-China trade talks resumed. Negotiators resumed trade discussions by phone but have yet to set a time to resume talks face to face. Worries mounted over a reshuffling of the Chinese negotiating team in order to give certain hardliners on trade more prominent roles. We suspect that the fundamental differences between the two sides mean those negotiations will probably come to nothing, with tariffs eventually being levied on all Chinese imports, a situation which will add downward momentum to interest rates across the curve.

US debt ceiling battle coming into view. Recent estimates suggest that the US Treasury is running out of cash faster than expected, and that the US government could run up against its debt ceiling by early September, a month earlier than previously expected.  The news prompted US political leadership to call for legislation to raise the limit before Congress’s August recess. So far, icy negotiations between the White House and the Democrats on Capitol Hill have not been able to bridge a divide over discretionary spending levels; the situation could be setting up for a lengthy battle, which could also add downward pressure to interest rates.

What to Watch This Week: Given that a rate cut on July 31st is pretty much a done deal, the big question now is what comes next. This week’s slew of scheduled speeches by Fed officials, the release of retail sales data (Tuesday), regional production surveys out of New York (Monday) and Philadelphia (Thursday), the Beige Book (Wednesday), as well as Consumer Confidence (Friday) will signal the degree to which consumers and the factory sector reacted to heightened trade anxieties in Q2. While the Fed continues to emphasize data dependence in determining policy action, even a streak of unanticipated strength won’t be enough to sway Fed officials away from cutting rates at month-end. Beyond that, we expect the Fed to cut by another 0.25% before year’s end.

Take-Away: The Fed Funds futures markets have become a widely accepted crystal ball for predicting Fed hikes or cuts. With a Fed cut predicted by Fed Funds futures, and a Fed that seems to be willing to acquiesce, it’s a good time to take a quick peek to see how accurate Fed Funds futures really are as a predictor of Fed action.

When observing Fed Funds futures the day before a Fed meeting, it tends to be correct in its prediction of Fed moves. Since the Fed began to publish post-meeting statements in 1994, there have been 211 meetings – including conference calls – resulting in 68 changes in interest rates; 39 of them were hikes, 29 were cuts. The day before the 39 hikes, Fed Funds futures (aka “the market”) priced correctly 85% of the time. For the 29 cuts, the market got it right only 45% of the time – though many of the incorrect market calls were due to missing the magnitude of cuts, not the direction.

When observing Fed Fund futures days or weeks before a Fed decision, “the market” is less accurate. A month before meetings at which the Fed ultimately moved, Fed Funds futures accurately predicted a hike only 64% of the time, while for cuts “the market” predicted correctly only 50% of the time – again, mostly getting the magnitude of cuts wrong. Your take-away? Develop your own view of the future path of interest rates, as financial markets don’t really get it right consistently more than half the time. Better yet, establish a relationship with a knowledge base (like ours at Derivative Logic) that can help you deploy tools to shield your business from unpredictable changes in interest rates over time. 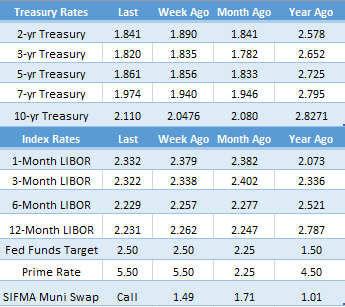 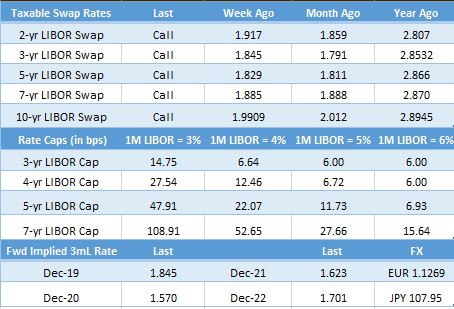