Last Week: Interest rates were notably higher as equities were modestly lower amid headwinds from a spike in oil prices. The yield on the US 10-year Treasury note rose 12 basis points to 3.08%, settling a tad lower than the 3.12% multiyear high hit mid-week. 1-month LIBOR followed suit, wrapping the week at 1.9527% after logging higher-highs all week. The price of a barrel of West Texas Intermediate crude oil ended little changed on the week, at $71.35, after touching $72.15 on Thursday, the highest level since 2014, . The US Dollar strengthened, and Gold weakened.  Treasury market volatility, as measured by the Chicago Board Options Exchange 10-year Treasury Volatility Index (TYVIX), was steady at settled down by weeks end at 3.82, after topping 4.08 last Wednesday in concert with the multi-year high in the 10-year Treasury yield.

Interest rates and oil prices rose together. A combination of solid US economic data and concerns over the potential for a fresh round of US financial sanctions on Iran helped push oil prices to their highest levels since 2014, pushing global Brent crude above $80 last Thursday. Yields on US 10-year notes moved up in concert, as firmer oil and solid US economic growth prompted renewed inflation concerns. Ever wondered why we mention the price of oil in this publication every week? Now you know. Regardless of the number of Teslas on the road, Oil is still, and will remain, a major input cost into many aspects of America’s economy, and when its price spikes or falls notably, it affects how inflation is viewed and ultimately, how the Fed may react.

US business spending rebounded. Yet another signal that the US economy continues to motor on: Capital expenditures by members of the S&P 500 Index are expected to expand 24% compared with the same quarter a year ago, per credible media sources. That’s the fastest increase in corporate spending since 2011, and a record for the first quarter of the year. Capex is important for long-term corporate profits and increasing economic productivity, and in the short-run adds momentum to job creation.

A China-US trade war off the table for now. After heated discussions last week, President Trump announced over the weekend that he won’t impose tariffs on Chinese products for now. The administration seeks to open up China’s financial sector to US companies as well as reduce the ballooning trade deficit between the tow countries. The news helped to support the lofty 10-year Treasury yields we’ve seen of late.

North Korea casts doubt on US summit. After several weeks of constructive dialogue in the lead-up to a scheduled 12 June summit in Singapore, North Korean officials threw cold water on any positive expectations of progress by threatening to pull out of the meeting if the United States insists on North Korea giving up its entire nuclear program before being rewarded with economic aid and security assurances.

What to Watch This Week: The days ahead are light on important economic data and heavy on Fed-related events. While the major economic data releases for the week will be April Durable Goods and Consumer Sentiment data, both set for release on Friday, markets will pay more attention to scheduled speeches from Fed officials and the release of the most recent Fed meeting minutes for signals on how the Fed is assessing the muted but increasing inflation landscape. In the midst of it all are guesses as to how much further Treasury yields will climb, and re-energized talk about the flat yield curve and what it means for the future direction of rates.

On the data front, Friday’s data on Durable Goods orders will likely fall following two solid months of solid gains in February and March. Given that most of the gains were attributed to aircraft orders and we already have news that Boeing’s orders are lower since then, we’re not expecting corresponding gains in Durable Goods orders this time around. The most important aspect of the Durable Goods data is how it relates to US factory production. As of now, Durable Good orders are +11% year over year, and outpace a 7% YoY increase in factory shipments, which implies continued factory production gains in the near term to fulfill the rise in orders. Good news indeed.

The March Fed meeting minutes, set for release on Tuesday, will be scoured for clues on how the Fed feels about meeting – and even exceeding – its “symmetric” 2% inflation target, which was officially hit just prior to the March meeting. Markets want to know if the minutes imply that the Fed feels the need to impose larger or more frequent rate hikes as a result of current inflation levels. We doubt they do, given the numerous inflation boogeymen that never appeared in recent years and the Fed’s addition of the word “symmetric” in describing its 2% inflation target in the last meeting’s official statement. As we continue to state, the Fed will continue on its slow and incremental path of 0.25% hikes, choosing to take a “light touch” on managing increasing inflation and accelerating economic growth. Unless something markedly changes on the consumer wage and inflation front, expect two more 0.25% hikes this year. One in June and another in the fall.

Take-Away: Alarmed by the sudden spike in the 10-year Treasury? Don’t be. While it makes a great news headline, it pales in comparison to what happened in May 2013, when the 10-year jumped over 1% in three and half months, topping out just above 3%. Dubbed afterwards as the “Taper Tantrum”, the sudden spike back then was caused by expectations of the Fed suddenly slowing the spigot of quantitative easing in the midst of a US economy that was fragile at best, just barely showing real recovery after the 2008 financial crises. While 10-year yields are now higher now than their highs back then, things are different this time around: the recent move higher in yields is half as large over the same period and it’s occurred amid a much more solid economic backdrop. Given that the entire yield curve has shifted higher in recent weeks, instead of fearing what the future environment brings, we’re contemplating how this new world of higher rates effects US growth and consumer’s spending activity going forward, specifically the ability of companies to pass on higher costs onto their customers.

While the recent spike in log term yields took some pressure off the ever flattening Treasury yield curves, the flat-curve environment will endure. The current rate environment still presents  borrowers with many opportunities to cushion the blow of higher rates on their future financings. As discussed at length in our Rates are on the rise: What Smart Borrowers are Doing Now  publication, many clients have used the flat curve environment to their advantage. Not sure what the flat yield curve could do for you? Ask us. 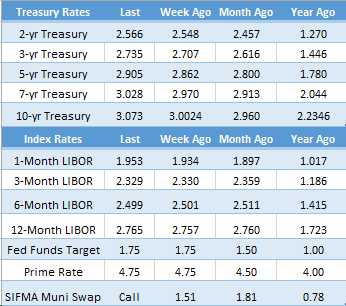 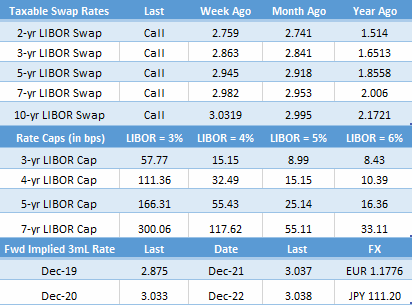 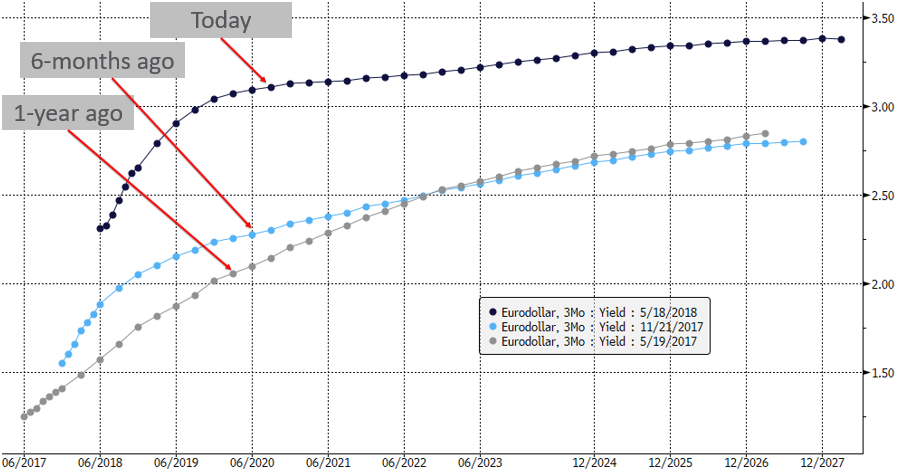 Borrowers: The Flat Yield Curve May be Your Friend
Scroll to top