Last Week: Interest rates were mostly flat as global equities rose on the week, the latter shaking off a significant decline after strong US employment data and encouraging comments from Fed Chair Powell helped calm markets. The yield on the US 10-year Treasury settled at 2.66%, down 11 basis points from pre-holiday levels, as 1-month LIBOR traded slightly higher to 2.52% from 2.50% a week ago.  Oil rose modestly to $48 as the US Dollar weakened and Gold rose slightly.  Treasury yield volatility, as measured by the Chicago Board Options Exchange Treasury Volatility Index (TYVIX), backed off its 30-day peak above 5 to settle at 4.63.

Strong US jobs report yanked slowdown fears back from the brink. Economic data on the state of US manufacturing and job creation sent markets – already reeling from a volatile holiday season – on another rollercoaster. Thursday’s very weak US manufacturing data for December sparked fears that the US economy is beginning to downshift along with the rest of the global economy. Market sentiment staged a complete U-turn on Friday, saved by the US employment report and soothing comments from Fed Chair Powell who talked markets off the ledge. The US economy added an extraordinary 312,000 jobs in December,  more than doubling expectations for a rise of 175,000 inclusive of October and November revisions. Average hourly earnings rose 3.2% year over year, while the unemployment rate rose to 3.9% from 3.7% as new entrants were added to the labor force. Fed chair Jerome Powell stated the Fed will be patient as the economy evolves but is fully prepared to shift its policy stance significantly if necessary. As we’ve said for weeks now, markets are underpricing the likelihood of Fed rate hikes this year, now expecting none in all of 2019. While even our expectations have been scaled back, we still expect at least one and possibly two hikes this year.

More signals point to slowing global growth. While the US manufacturing sector spent much of 2018 growing more quickly than its developed market counterparts, it appears that the pace slowed dramatically as 2018 drew to a close. The clearest sign of the slowdown was the publication of the closely watched Institute for Supply Management’s manufacturing purchasing managers’ index (PMI) on Thursday, which showed a tumble of more than five points in December, to 54.1 from a robust 59.3 in November, the biggest one-month decline since Lehman Brothers collapsed in the fall of 2008. Survey participants pegged the recent loss of confidence mainly on the ongoing US-China trade war. Globally, China’s manufacturing PMI fell into contraction territory in December, below 50, while the eurozone PMI slipped to 51.4, suggesting weakness is spreading around the world. The news plays into our long-standing view that US growth will slow markedly this year, but that we’ll avoid a recession until 2020. For more on our views on where the economy and interest rates are headed, look for our Annual Forecast via email later this week.

Trade War woes begin to hit US companies doing business in China. News that Apple lowered its Q1 revenue guidance by 8% , its first pre-announcement in a decade, on significantly slower sales in China – prompted the White House to warn that many other companies may face lower earnings in China until the United States secures a trade deal. As we’ve said for months, China’s economy is less resilient to the economic pain a trade war brings relative to the US, and growing evidence China is slowing markedly bolsters our view that China will acquiesce on many US demands and a deal will be reached in mid to late 2019. However, differences regarding technology sharing may never be resolved.

What to Watch This Week: Headlines will be dominated by news of ongoing negotiations related to the US government shutdown. Despite the media deluge, we doubt the shutdown will have any real, lasting impact on the economy unless it persists well into January.

The shutdown is delaying the scheduled release of economic data however, which will muddy the economic picture, as if forces larger revisions to the data down the road. Data on new home sales, construction spending, factory orders, the trade balance and wholesale inventories, originally set for release this week, will all be delayed if the shutdown lingers through the week.

In the meantime, we have our eye on December’s Consumer Price Index report, set for release on Friday, to see if the higher wages we’ve heard so much about are finally manifesting in higher prices/inflation. While we doubt we’ll see higher inflation this time around, we do expect to see it show up more meaningfully later in the year. Since the inflation outlook will define the Fed’s hiking path this year (remember that the Fed’s other mandate – full employment – is already running hot), if wage-driven inflationary pressures materialize more meaningfully, the Fed will not hesitate to deliver more rate hikes.

Curious where we think rates are headed this year? Here’s a preview of our Annual Rates Forecast, set for release via email late this week:

Markets now expect no Fed hikes in all of 2019. We beg to differ and feel that markets are selling America’s economic strength short.   Here are a few reasons why the Fed will hike this year:

1) Although America’s economic momentum seems to be slowing, we expect the slowing to be moderate and doubt the economy will tip into recession this year. That said, the moderation in growth will still translate into solid job creation and will keep the unemployment rate uncomfortably low for the Fed, enough so to keep the possibility of overheating firmly on their radar. The Fed won’t hesitate to hike if they feel the jobs market is overheating.

2) With a few months of bona-fide wage increases in the bag, more money in consumers’ pockets combined with a still-growing economy will eventually translate into inflation beyond the Fed’s 2% mandate. They’ll have another reason to hike as inflation creeps higher.

3) The Fed Funds rate – the interest rate the Fed hikes or cuts to effect monetary policy – at 2.50%, is still very low historically. It’s also at the bottom end of what the Fed calls the “neutral rate”; the rate that is neither stimulative nor suppressive of the economy, giving the Fed ample room to hike at least once this year should it feel the need.

4) Fed Chair Powell will successfully deflect calls by President Trump to ease monetary policy and will – as he should – continue to focus on data and the economic outlook for guidance. The Fed will continue to focus on its long term, dual mandate of maximum employment (aka hiking to prevent an overheating of the jobs market) and price stability (aka hiking to stamp out the possibility of a spike in inflation).

In short, we expect the Fed to hike by 0.25% one or two times this year. The timing of such has become more clouded, but we expect the first hike to occur mid-year at the latest. 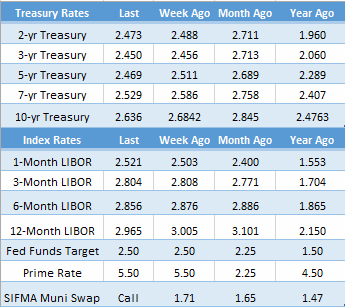 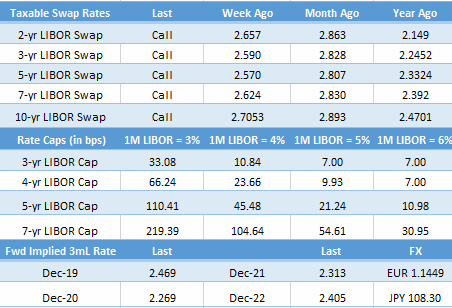 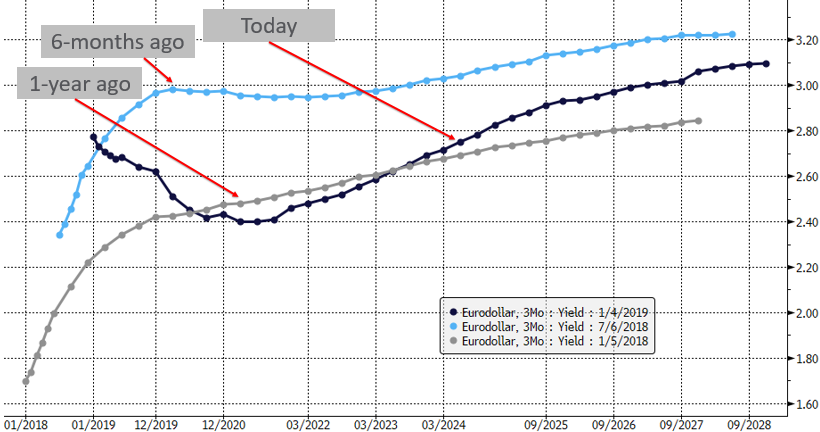