What You Missed: Long-term rates leaped higher and equities narrowly advanced in a volatile week of trading, filled with domestic and international cross currents. The yield on the benchmark 10-year US Treasury note rose to 1.45% from a low of 1.33% while short-term rates, like LIBOR, SOFR and BSBY, continued to bounce near record lows.  The price of a barrel of West Texas Intermediate crude oil rose to $73.86 from $72.01, as the US Dollar and Gold traded flat. Treasury yield volatility, a key driver of the cost of option-based derivatives like rate caps, drifted in a range.

Fed delivered its taper tease. At the conclusion of its much-anticipated policy meeting, Fed Chair Powell and Co. held benchmark interest rates near zero but indicated rate hikes could be coming sooner than expected, while significantly cutting their economic outlook for this year. Further, it indicated that it will soon start easing off its bond-buying throttle but kept markets guessing as to when its “tapering” will begin. A majority of the Fed’s voting members now see the first rate hike happening in 2022, about a year sooner than previously expected. The Fed cut its GDP growth forecast to just 5.9% for the year, compared with a 7% forecast in June. However, 2023 growth is now expected at 3.8%, compared with 3.3% previously. Holding its ground on its “inflation is transitory” mantra, the Fed sees core inflation coming in at 3.7% this year, compared with its previous 3% forecast, and that inflation pressures will ease in the coming years: 2.3% in 2022 and 2.2% in 2023.

Our take: Pretty much everyone expected the Fed to signal its tapering intentions; what caught markets by surprise was the shift in the Fed’s dot plot, from which markets have inferred that the first rate hike will occur in 2022, as opposed to the Fed’s previous estimate of 2023. While all of a sudden the dot plot is a big deal know that it’s a terrible predictor of when and how much the Fed will hike rates.

Regarding the timing of a taper, by using a vague reference that it will begin “soon”, the Fed is giving itself wiggle room to push tapering to next year in the event the expected improvement in economic conditions – like job creation and a calming of supply bottlenecks – doesn’t materialize in the next few months. We expect the Fed to announce a formal taper timeline at its next policy meeting in November, and that its first tapering actions will begin in earnest in December. The fly in the Chardonnay? A drawn-out debt ceiling standoff and/or a blow up in international risks. If all continues as it is today, and the Fed does finally announce its tapering plans in November, long-term rates will mostly hang on to their recent gains and stage a slow, jittery drift higher.

Congress scrambled to avoid a government shutdown. The US House of Representatives passed a bill to a avoid a government shutdown and suspend the debt limit, but it faces Senate roadblocks ahead of the fast-approaching September 30th deadline. Republicans are threatening to block the measure if it includes a debt limit suspension, which could leave Democrats scrambling to find another way to avoid a federal funding lapse or even a first-ever default on US debt. The White House began to advise federal agencies that, barring a new appropriations bill, they expected to execute a shutdown next week. Should the Senate negotiations become rocky, and a US default becomes a real possibility, long-term interest rates will spike higher. Will it happen though? We doubt it.

Evergrande – is it a real threat to market stability? Chinese authorities have told local officials to prepare for the potential demise of property developer Evergrande, the world’s most indebted developer, with liabilities of $300 billion. Local officials described the signals from Chinese authorities as preparations for a potential storm and said the government told them they should step in only at the last minute to prevent spillover effects from Evergrande’s demise. Evergrande was due to pay $83 million of interest last Thursday for a $2 billion dollar-denominated bond that is set to mature in March 2022. For some perspective, non-financial corporate debt in China is now on an even bigger scale than Japanese corporate debt before its economy ground into crisis in the 1990s.

Why is this important? Dollar bonds are typically held by foreign investors, and any default on them would directly, and negatively impact many investors, banks, bond funds and commodities, globally. Even if no payment is made, the company will not technically default unless it fails to make that payment within 30 days. As of this writing, Evergrande had not made any announcement, nor had it filed any official regulatory filings suggesting it isn’t able to pay, leaving global investors in limbo.

Our take: Evergrande’s problems were in many ways triggered by China’s regulatory crackdown on developers’ leverage last year, and it looks as though the Chinese authorities are determined to ensure some form of orderly workout. Hence, we doubt that an Evergrande default or bankruptcy would trigger a crisis on the scale of the disaster that followed the Lehman Brothers collapse in 2008, which took markets by surprise. This is what you might call the “upside” of the Chinese government’s increasing willingness to intervene in the private sector. While Chinese authorities work to figure it out, we look to long-term yields in the meantime to tell us if US financial markets are really worried about an Evergrande default. What are they saying? Everything’s going to be fine.

What to Watch This Week:  The days ahead are chock full of data releases and events that will test the Fed’s assumption that growth will rebound, and that supply bottlenecks and inflation pressures will resolve next year.

While it’s likely that the recent softness in consumer spending is a temporary phenomenon due to the Delta variant, supply-chain bottlenecks are getting worse rather than abating. Lead times for semiconductors continue to worsen, and port congestions and shipping delays have been exacerbated by the spread of Covid in Asia and Hurricane Ida-driven supply disruptions. As an example, one of our partners is having to wait over two months for his new motorcycle to arrive, and that’s a conservative estimate.

Is the Fed wrong in its belief that its all just temporary? This week’s data releases will offer the next set of refreshed signals to help clarify the situation. The third print of second-quarter GDP (Thursday) will likely confirm that consumers entered the year with a strong appetite for spending due to stimulus checks, as Treasury Secretary Yellen and Fed Chair Powell will attest in their Senate testimony (Tuesday). But increased costs of living – from skyrocketing housing prices (S&P Corelogic Case-Shiller, Tuesday) amid low inventory (construction spending, Friday) and supply-chain disruptions (ISM manufacturing, also Friday) –  and Covid resurgence have weighed consumers down in their sprint toward economic recovery.

Bubbling inflation pressures, as reflected in the Fed’s favorite gauge of inflation, the PCE deflator (Friday) dented consumer’s confidence (Tuesday) in the future heading into September. Durable goods orders for August (Monday) will shed light on whether supply constraints have slowed business’s appetite for spending on new equipment.

Elsewhere, we’ll be watching events in Congress closely this week as Democrats take a first step in tying a suspension of the debt-ceiling to government funding. Treasury yields could be whipsawed as political hiccups create headline risk as each party seeks to gain leverage. At the end of the day though, we expect the debt ceiling will be raised before the funding deadline.

Big Picture: The Fed has now officially begun to broadcast its tapering plans far and wide, and the tapering messaging will develop even further over the coming weeks.  But with rate hikes totally disconnected from the taper, the timing of the Fed’s first post-Covid rate hike is less certain. While markets are pricing the first hike in December 2022, the Fed may have other plans.  In the meantime, we doubt we’ll see the 10-year Treasury yields much higher than 1.50% at year’s end, especially given last week’s large move higher. 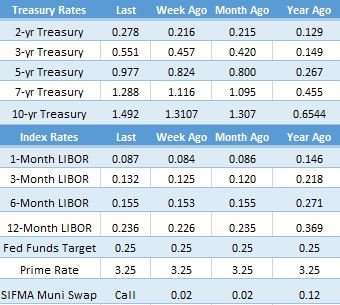 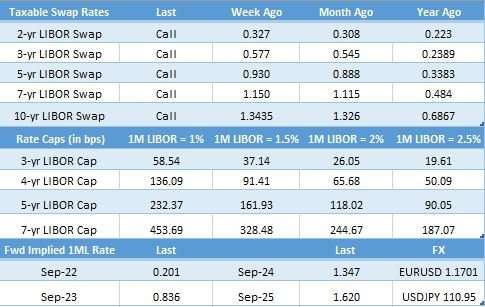 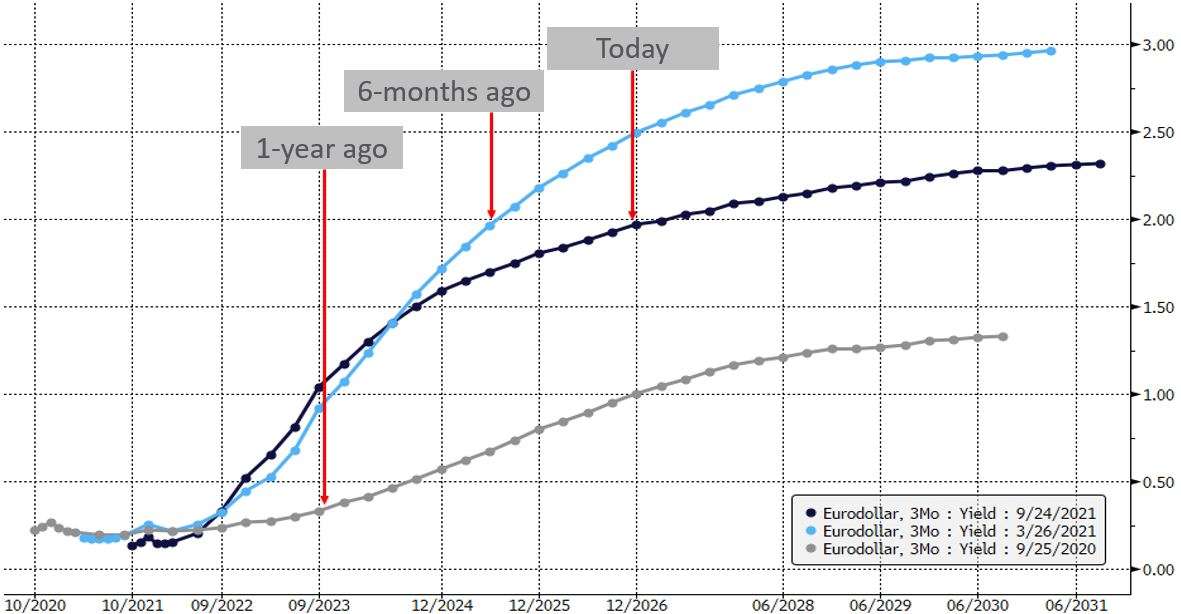 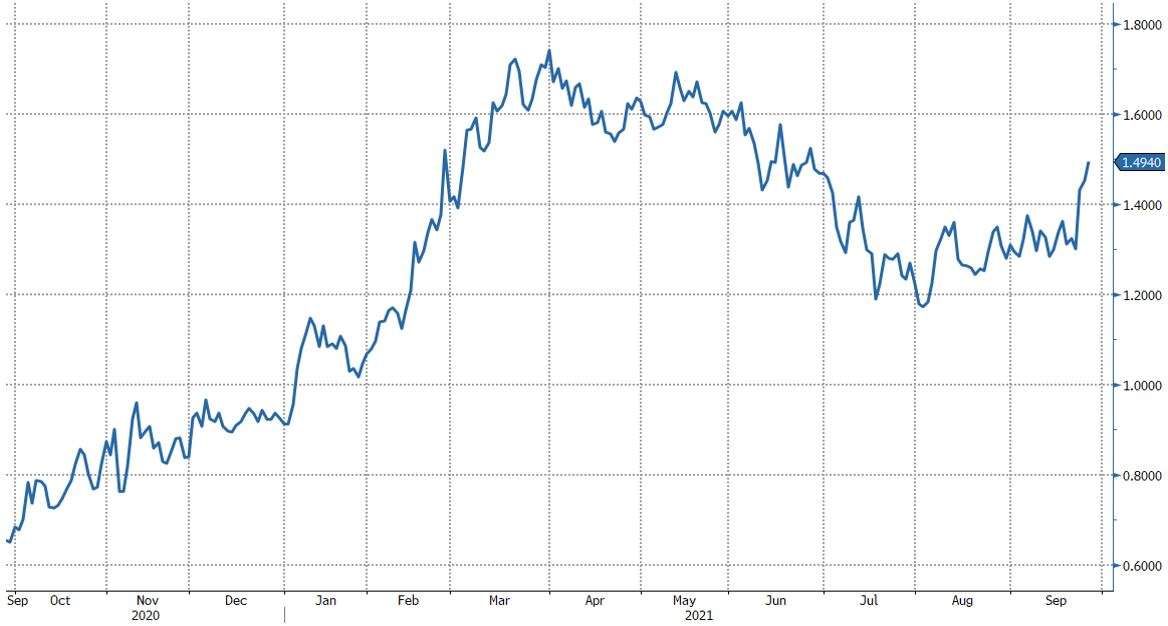