Fed To Double Down At Jackson Hole 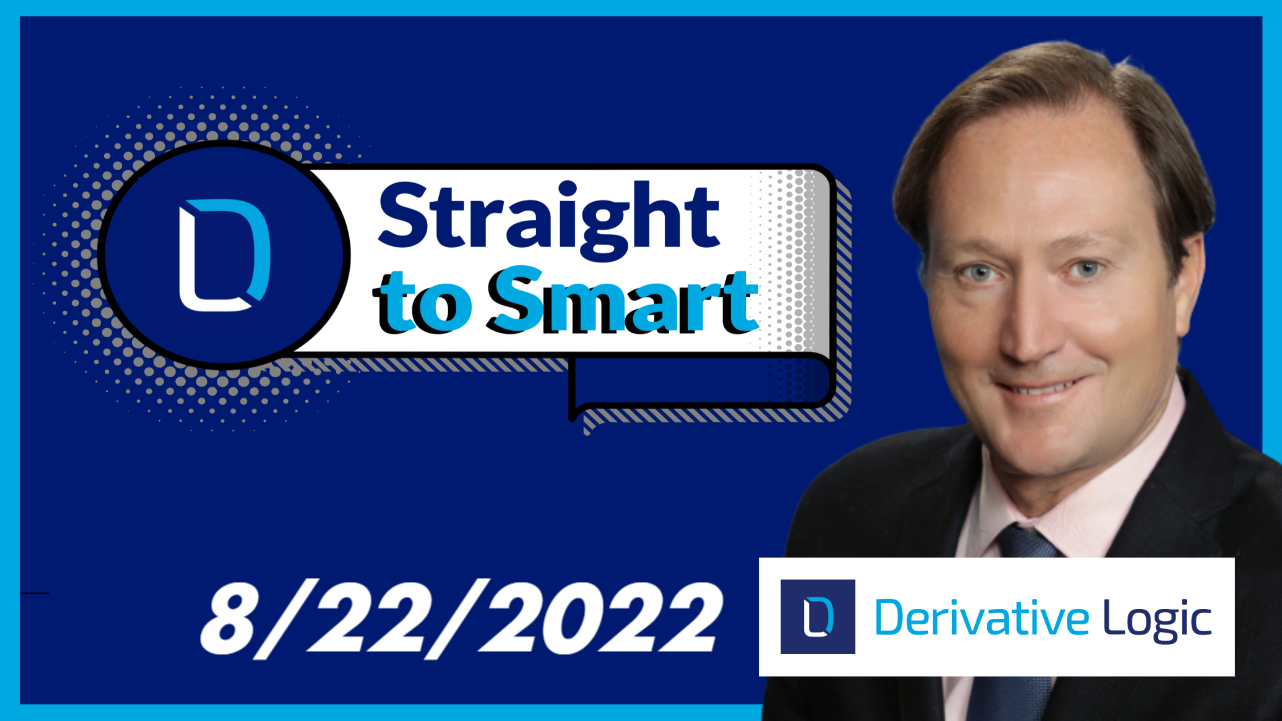 What You Missed: Interest rates across the curve lurched higher last week, driven by minutes from the Fed’s last policy meeting that implied the central bank could hike more than necessary to tame inflation.

For the week, the 2-year US Treasury yield rose 5 basis points to 3.23%, easing off mid-week highs near 3.29%. The largest rate increase was seen in the 10-year Treasury note, which rose nineteen basis points to 2.95%, a one-month high, but well off its 3.47% peak in mid-June. Elsewhere, the price of a barrel of West Texas Intermediate crude oil fell to $88.50 from $92 a week ago, as the US Dollar strengthened, and Gold weakened.

By the end of last week, the implied yield on the March ’23 Fed funds futures contract  – the rate market’s best guess how much more the Fed will hike from here – stood at 3.64%, up from 3.33% this time last month.  The futures market anticipates the Fed funds rate peaking around March/April ’23, then slowly drifting lower by ~ 50 bps into year-end ’23.

Hedging costs rose but remain well off June highs. 3-month Term SOFR rose 5 basis points to 2.78% while implied future 3m SOFR yields – a useful gauge for changes in the cost of interest rate caps – fell; expectations for where 3-month Term SOFR will be a year from now rose about ten basis points to  3.35%, 2-yr expectations rose about 23 basis points to 2.82% and 3-yr expectations rose 20 basis points to 2.53%.  Despite the increases, these levels are still well below their mid-June highs and continue to reflect an easing in rates after Q1 ’23.  We see risk that if inflation doesn’t soon recede, the rates market will eventually attempt to send medium-term yields up ~50 basis points, back to mid-June levels.  Contemplating hedging rate risk anytime soon? Don’t fall asleep at the wheel; dynamics driving rates of late are shifting more often than usual, thus please check with us for updates before pulling the trigger.

Fed meeting minutes show resolve to kill inflation. Markets were left wanting by last week’s release of minutes from the Fed’s July 27th rate-setting meeting. The minutes provided little clarity on when the Fed will halt its tightening cycle, and at what rate level, nor did they indicate that a potential pivot from rate hikes to rate cuts is in the offing anytime soon. What was clear from the minutes was the Fed’s commitment to killing inflation, and that the Fed may hike rates more than expected to do so.  The minutes also suggested the Fed will look past the recent fall in oil prices, which they see as volatile and an unreliable gauge of the state of inflation.

Our take: The minutes provided very little guidance on the Fed’s short-term policy trajectory. The minutes did tell us, however, that Fed officials were uniformly of the view the central bank would continue to aggressively fight inflation, with a goal of smothering it to a level that meets its 2% inflation target. With the last annualized inflation reading at 8.7%, it looks like we’ve got a long road of rate hikes ahead of us, although futures markets are anticipating rate cuts as early as next year. This collision course between rates markets and the Fed will have to be reconciled soon, and it’s anyone’s guess which way it will go. Either the Fed backs down from its aggressive stance or markets ease off their expectations of rate cuts. We’d guess that eventually the Fed and markets will meet somewhere in the middle.

In the meantime, July’s better-than-expected gauge of the jobs market and a downside inflation surprise, both of which occurred after the Fed’s July meeting, may have changed the Fed’s mind somewhat. The next set of jobs (Non-farm Payrolls, due 9/2) and inflation data (Consumer Price Index, due 9/13) could alter it even further as the Fed prepares for its next rate-setting meeting on September 21st.

High US interest rates continue to pummel housing. The National Association of Homebuilders Market Index dropped from 55 in July to 49 in August, indicating a decline in sentiment among US homebuilders. For comparison, the index started 2022 at 84. Demand for both new and existing homes has decreased due to higher mortgage rates. Housing starts decreased for the sixth consecutive month in July, falling 5.9% from June to their lowest level since early 2021, while existing home sales also declined. The median sale price dropped from $413,800 in June to $403,800 in July. Fitch Ratings issued a warning this week stating that a major US housing downturn is possible but not likely.

Our take: Housing activity, among the most interest-rate sensitive sectors, remains in steep decline. Since their April peak, housing starts are down 20%, and since January, existing home sales are down more than 25%. According to the most recent Fed meeting minutes, this was a deliberate side effect of tightening monetary policy and tells us that a deteriorating housing market won’t dissuade the Fed from raising rates substantially higher.

Lower gas prices gave consumers retail relief. Retail sales for July were flat, coming in slightly weaker than the consensus forecast (0.1%). Despite the lack of progress, the data were promising ahead of August’s back-to-school season, the first significant test for retailers before the holiday season.  First, consumers – who alone are responsible for nearly two-thirds of US economic activity –  will be positioned to spend more on the back of the steady decline in gasoline prices. Second, according to preliminary data, there will likely be significant discounting by retailers around the corner, which should boost sales of general merchandise. Bottom line? Better-than-expected retail data suggest the US economy has enough momentum to withstand more Fed rate hikes.

Surging inflation sends UK confidence lower. Consumer confidence in the UK hit a record low of minus 44 in August amid warnings of an imminent recession and a 40-year high in the cost of living. With UK inflation recently rising to 10.1% for the first time since 1982, the mood of the UK economy has darkened. According to a Bloomberg survey, UK analysts now predict a 75% chance of a recession within the next year, up from a 44% likelihood in the previous survey. Recent employment data from the UK was strong, with the unemployment rate remaining at 3.8%, even though real earnings are still being negatively impacted by rising inflation. Why you should care: It’s a global economy folks. The gathering storm clouds in Europe and the UK only harden the Fed’s resolve to hike further.

What to Watch This Week: All eyes are on this week’s speech by Fed Chair Jerome Powell (Friday) at the Fed’s annual gathering in Jackson Hole, Wyoming.

J-hole, as we call it around the office, will offer an opportunity for the Fed Chair to reset messaging on its planned policy path after many interpreted July’s meeting minutes and the Chair’s post-meeting press conference as dovish.

In his speech this week, we suspect that Chair Powell will double down on the need to smother inflation and go out of his way to discourage markets from assuming the Fed will shift to rate cuts anytime soon. We doubt Powell will provide any clues on the Fed’s near-term rate trajectory, however. Rather, Powell will look toward August’s jobs market and inflation data to do that for him.

Elsewhere, to maintain any hope for a Q3 GDP bounce, the July personal income and spending figures (Friday) must show a sizable inflation-adjusted bump. Given that last week’s retail sales data for the month indicate consumers are holding steady despite skyrocketing inflation and a troublesome housing market, home sales data (new home sales, Tuesday; pending home sales, Wednesday) will be scoured for evidence that supports the notion.

All too often borrowers add risk when executing a swap, especially when fear – amid rising rates –  is the driver.  We are now faced with unknown challenges after years of low interest rates.  Objective, independent advice is critical right now to avoid the many pitfalls that lie ahead. In our decades of capital markets experience, we’ve had a front row seat to many economic cycles. Put our deep knowledge to work for you. 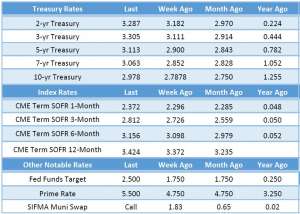 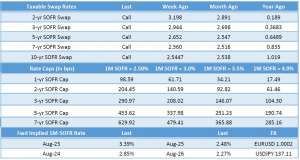 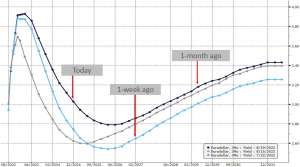 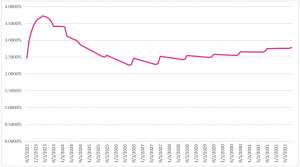 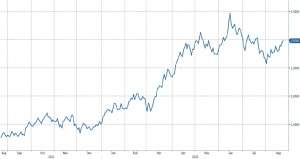