Last Week: Interest rates traded slightly higher as equities fell on the week amid volatile trading, driven mainly by increasing political and economic uncertainty. Yields on the US 10-year Treasury note drifted higher to 2.89% from 2.86% last week while 1-month LIBOR continued its March higher to 2.45% from 2.42% this time last week. Oil fell $2 to $51.60, as the US Dollar strengthened, and Gold fell. Volatility, as measured by the Chicago Board Options Exchange Treasury Volatility Index (TYVIX), fell to 3.66 from 4.38 a week ago.

Growing signs of a slumping Chinese economy spurred trade talks forward. China resumed purchases of US soybeans and crude oil while rolling back tariffs on US-made autos to their pre–trade war level of 15% from 40%. These concessions and China’s seeming desire to engage more deeply with the US on trade seems to be driven by a sharp decline in domestic economic activity. Chinese auto sales have fallen for five straight months and could post their first year-over-year decline since the early 1990s. Retail sales reflected the slump in auto sales, only rising 8.1% year over year in November compared with forecasts for a 9.0% pace. The pace of industrial production slowed more than expected in November, rising at a 5.4% year over year pace compared with October’s 5.9%. China’s moves last week are the likely start of a growing list of trade concessions, and as we’ve been saying for months now, China will ultimately cave to many US trade demands as its economy slows further.

Rate caps are on sale. We’ve seen the cost of rate caps fall dramatically over the last couple of weeks, backing off outrageously high levels as interest rates came back down to earth and volatility has moderated. If you’re a floating rate lender requiring your borrower to purchase a rate cap, they’ll find the cost of such much more palatable. If you’re a floating rate borrower worried about a rise in rates, now is a good time to consider layering on some protection. Call us for details.

US data were mixed as jobless claims fell back to recent lows. One of the most helpful early warning signs of a slowing economy is a persistent rise in weekly jobless claims. Before last week, economists were becoming concerned as jobless claims edged higher week after week over the past several months. Last week’s decline to 206,000 was close to the 49-year low of 202,000 posted in mid-September and alleviated some concerns. Elsewhere, US data were mixed: Retail sales rose 0.2% in November, as expected, nudged higher as lower oil prices, and a rise in wages left more cash in consumers’ pockets to spend elsewhere. Industrial production rose a more-than-expected 0.6%, mainly driven by the utility and mining sectors. The move was a head fake however, as colder winter temperatures always boost utility activity and lower oil prices will eventually subdue the mining sector. US economic performance, and US consumers in particular, are increasingly seen as the only economic bright spot globally, as similar measures of consumer activity in Europe and Asia are lagging.

A partial US government shutdown looms. Congress is headed for a Democratic vs. Republican showdown this week as both sides toy with a government shutdown. Seven appropriations bills need to be approved by December 21 or about 25% of the US government will run out of funding. President Trump insists he won’t sign the funding bills unless they include $5 billion to fund a border wall, rejecting an overture by Democratic legislators of $1.6 billion earmarked for border security. A two-week funding extension was put into place on December 7, so another temporary measure could be put in place by week’s end. The new Democratic House will be sworn in on January 3, dramatically altering the makeup of the House of Representatives. Government shutdowns have typically lasted only few days in recent years and have not had any real impact on financial markets.  While there appears to be little willingness to negotiate at present, we’re confident a last-minute solution will be found and that markets will shrug the budget fight off yet again. In the meantime, enjoy the political theatre.

The European Central Bank ended QE despite uncertain outlook. The ECB confirmed its asset purchase program will come to an end this year and reiterated that rate hikes will not come until at least after the summer of 2019. However, market expectations of the first rate hike have been pushed out to early 2020, given a soft economic outlook for the eurozone, headwinds from Brexit, social unrest in France and an ongoing budget battle between Rome and Brussels all dampen the mood. The ECB shaved 0.1% off its growth and inflation forecasts for 2019, which now stand at 1.7% and 1.6%, respectively. Why should you care?  The ECB’s change in tact will add downward pressure on US Treasury yields as global investors seek higher returns amid Fed rate hikes.

What to Watch This Week: The importance of economic data will sunset this week and won’t have much of an impact on interest rates through year-end. As such, market moves from here on out will be event driven, and simmering trade tensions, the border wall funding and the potential government shut-down and what comes out of this week’s Fed meeting could easily roil markets into year end. With a 0.25% Fed rate hike this week all but guaranteed, the trillion-dollar question now is: What will the Fed do in 2019 and 2020?

Before markets can really begin to answer that question, they’ll have to analyze the Fed’s communications – specifically Fed Chair Powell’s press conference and the Fed’s latest forecasts for interest rates and the economy – during this Wednesday’s FOMC meeting. We expect the Fed to leave the question open as to how much it will hike next year, and to retain as much flexibility as possible, as it reiterates the strength of the US economy this week and avoids creating expectations that it’s on a pre-set course of rate hikes next year. No matter one’s opinion, the Fed’s message this week will dictate whether the inversion seen in some parts of the yield curve becomes more pervasive. The spread between 2- and 10-year yields is already close to going negative for the first time since 2007.

Other than the Fed meeting, there’s a slew of mostly second-tier data scattered throughout the week; durable goods orders, the final reading of Q3 GDP, consumer sentiment, housing starts, manufacturing and interest rate decisions by the Bank of England and the Bank of Japan will do little to alter current sentiment and won’t move financial markets in any meaningful way.

Take-Away: Markets have downgraded their expectations of Fed tightening next year dramatically in recent weeks in response to increasing global risks. At present, markets are pricing in barely one hike next year. That’s it. If you’ve ever attended our Derivatives 101 sessions, you know that markets are wrong most of the time.

It’s no different this time around. The Fed will remain on its hiking path. We continue to expect at least two more 0.25% hikes next year and believe that we could see the Fed even cut rates in 2020 as higher interest rates and a global slowdown ultimately take their toll on US growth. However, before that, US economic performance will continue to surprise to the upside. If we turn out to be wrong, it will likely be due to unforeseen events rather than economic factors. One thing is certain: The Fed will be more cautious going into 2019. As such, if the Fed modifies the key phrase “further gradual increases” in its official meeting communication this week, it shouldn’t be viewed as a signal its backing off it’s hiking path.

Concerned about all the market volatility of late? Keep this mind: The Fed is slowly weaning the world off of the greatest monetary policy experiment – the comforting support of ample, consistent and predictable liquidity – in human history, and moving us toward a brave new world where economic and corporate fundamentals hold sway. Volatility should be expected. 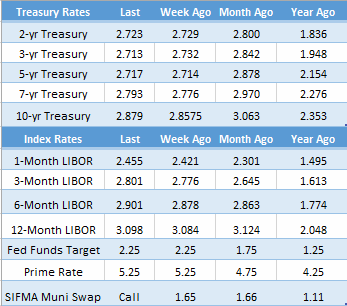 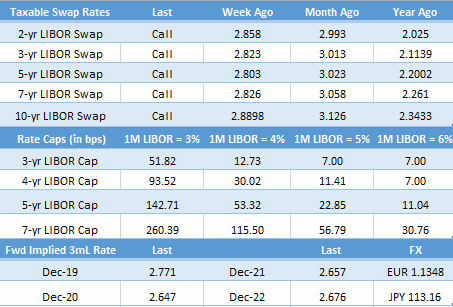