Fed vs Treasury Tug of War to Dominate Rate Moves

Last Week: Interest rates were mixed, and equities were higher on the week as the economic fallout from the pandemic became clearer. The yield on the US 10-year Treasury traded within its well-worn yield range, bouncing a mere 7 basis points between its 0.70% peak seen mid-week and its 0.63% trough. 1-month LIBOR continued its slow but steady drift lower, falling six basis points throughout the week to finish at 0.198%. Oil came back from the dead to add to last week’s gains, rising $5 to $24.50 as the global economy took tentative steps toward reopening after the cresting of new coronavirus cases. Treasury yield volatility, a key component in the cost of rate caps and swaptions, rose modestly to 5.15 from 4.69 at the start of the week.

Interest rate swaps: a quick public service announcement. We have been receiving an overwhelming number of calls lately – probably more than ever – from borrowers considering interest rate swaps as a vehicle for hedging interest rate risk. In many of these conversations, the borrower is at the mercy of their bank that is offering the “best” hedge to lock in historically low rates. While certain aspects of a swap may be beneficial or convenient on the surface, they can often add risk, and costs, or limit future flexibility. Many borrowers are also dealing with amendments and forebearance complexity as their loans experience the COVID-19 shock. We can’t stress enough how important it is to seek independent advice to help clarify what’s being offered, and more importantly, to give the borrower a comprehensive understanding of all the costs and risks involved. The bank is trying to sell you something. It’s your job to understand it. Do you? If you call, be sure and ask us about forward starting swaps as well.

Markets took horrific jobs report in stride. The scope of the economic damage wrought by the coronavirus pandemic became clearer on Friday, with the April jobs report – the most important piece of data for interest rates – showing as many jobs lost as the last eight recessions combined. Nonfarm payrolls fell by 20.5 million during the first full month of the lockdown, unwinding more than 20 years of job creation in a single month, and putting the number of employed workers back to levels not seen since early 2000. The unemployment rate rose to a post-World War II record of 14.7% from 4.4% the month before. Average hourly earnings rose dramatically in April, by 4.7% compared with March, as white-collar workers were largely kept on payrolls while lower-paid workers suffered job losses disproportionately. All told, the jobs data were somewhat better than economists’ forecasts of a 22 million drop in jobs and a 16% unemployment rate, muting negative market reaction to the news.

The private-service sector bore the brunt of the job losses, and manufacturing, construction, and state and local governments all suffered massive layoffs. Within the private service-sector, leisure and hospitality made up the bulk of all the job losses, followed by education and health services, and professional and business services. Least affected were the financial, transportation and warehousing sectors, followed by utilities – basically parts of the jobs spectrum where it is easy to work remotely or where the work is considered essential.

Is the employment situation leaving you bewildered? Buckle up – there is no end in sight. While the total number of layoffs was modestly better than forecasts, filings for unemployment benefits show that the pace of job losses continued to surge after the mid-month survey for the April jobs report concluded. Hence there is little solace to be taken from the fact that the jobs situation, while terrifying, wasn’t as bad as economists expected; a sizable downward revision to April’s jobs numbers awaits us in next month’s report, and as a result, the unemployment rate will likely top 20% in May. Over the long term, we expect the staggered reopening of the economy to keep the unemployment rate above 10% through year-end. What’s next? We are laser focused on monitoring whether the progress in reopening various states occurs as smoothly as hoped. If it doesn’t, the jobs picture will darken further, and short-term interest rates will be doomed to their current ranges or move even lower.

Futures markets suggest Fed Funds will go negative early next year.  December Fed funds futures traded in negative territory late last week – a move that implies that the Fed will cut its policy rate below zero sometime in early to mid-2021. The moves in futures markets were fueled by the steady drip of dire economic data and supported by steep moves lower in the two and five-year US Treasury yields in recent days as well as in one-month and three-month LIBOR. Could we really see negative interest rates here in the US? It’s unlikely. The Fed has consistently poo-poo’d the possibility of negative rates, and stated that if things get considerably worse, it stands ready to employ other methods of stimulating the economy. We can’t blame them, things haven’t worked out so well for other countries employing negative rates (for a full discussion see our DL Report, Negative Interest Rates for Dummies).

As for last week’s move in futures markets, we’ll chalk that up to technical factors for now, and don’t see any real possibility of negative rates unless the much hoped for economic recovery fizzles out, ultra-low inflation transforms into deflation, and the spectrum of US Treasury yields approaches zero.

What to Watch this Week: The key economic data releases this week will begin to gauge the state of the ever-important US consumer. Consumers were the driving force behind the economy prior to the crisis, and they will be catalyst of the pace, vigor and timing of any economic recovery as well.

Data on retail sales, consumer sentiment, industrial production, weekly jobless claims and the NY Empire Manufacturing Purchasing Managers Index – a measure of the prevailing direction of economic trends in the manufacturing sector – will shed light into just how bad things got last month.  We’re expecting another slew of horrific numbers, reflecting the nationwide shutdown of non-essential businesses, which will cap any substantial moves higher in rates in the short term.

We continue to highlight the importance of weekly jobless claims filings as a gauge of what is to come, as they provide a more frequent pulse on total job losses, and a peek into whether the pace of job losses is slowing. Ignore them at your peril.

Other than data, there are several speaking engagements from Fed officials this week, including from Chair Powell on Wednesday, when markets will be listening intently for any hint of the Chairman’s view on negative interest rates.

Big Picture: There is a tug of war of sorts erupting in America’s bond markets between the US Treasury and the Fed. The US Treasury is flooding the market with debt to pay for all its massive stimulus efforts, helping to drive up long-term rates like the 10, 20 and 30-year Treasury yields. At the same time, the Fed has cut short-term rates to zero and promised to keep them there to help revive growth, while reducing the pace of its purchases of US Treasury bonds. The result? A Fed vs. Treasury tug of war, and a steeper Treasury yield curve, where short-term rates are well below their longer-term counterparts (need a primer on yield curves? Check out The Yield Curve: What You’ve Always Wanted to Know but Were Afraid to Ask).

Two and five-year Treasury yields both hit record lows last Friday, while 10 and 30-year bond yields have moved and stayed well above their recent lows. Taken together, that equates to a steeper yield curve. The imminent reintroduction of the 20-year Treasury bond is adding to the momentum. What it means for you? Well, outside of the ongoing Fed vs Treasury tug-of-war and the steeper yield curve that results from it, it is all about the success of the staggered re-openings of the nation’s economy. Assuming all goes well, and no new massive COVID-19 outbreaks occur, the curve will likely continue its steepening trend. If the re-openings go poorly, we will likely see a test of new lows in yields across the yield curve. 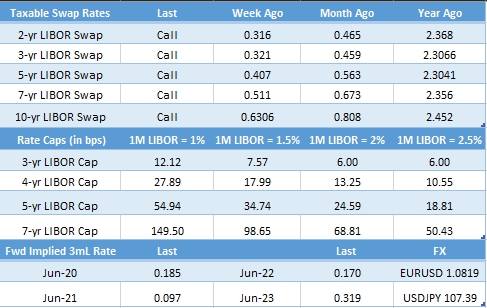