Last Week: Interest rates fell as equities were little changed on the week. The yield on the US 10-year Treasury note fell 8 basis points to 2.06%, the 10-year Swap rate fell 11 basis points to 2.01%, while 1-month LIBOR followed suit, falling 2 basis points over the course of the week. The price of a barrel of West Texas oil fell $1 to $52.35, as the US Dollar and Gold both strengthened. Treasury yield volatility rose to 5.41% from 4.42% this time last week.

Markets increasingly expect fiscal and monetary stimulus in the months ahead – globally. Markets are pricing in a nearly 87% chance of a Fed rate cut before the fall season, while officials from the European Central Bank and the Bank of Japan laid the groundwork for easing policy further. The stimulus expectations have come from mounting evidence that the global economy is running out of steam amid a slowdown in global trade stemming from the US – China trade spat, and as inflation remains stubbornly below central bank targets. China will lead the way in the looming stimulus actions, as a steady stream of economic data show its economy is slowing broadly. The magnitude of the disconnect between the market’s rate cut expectations and the Fed’s plans for such is staggering. Markets expect the soon-to-begin cutting cycle to stop just short of four rate cuts, ending somewhere near January 2021. Our view: The market’s hopes for cuts run well ahead of reality. Keep reading for a deeper analysis.

Economic data isn’t screaming the need for near-term rate cut. Retail Sales – an important barometer to gauge the attitudes and spending habits of consumers, who account for 70% of economic activity, rose by a stronger than expected 0.5% in May and previous months’ gains were revised higher. The data showed that America’s consumer-dominated economic growth profile remains intact and that the economy will likely continue to expand at an above-trend pace, driven by solid gains in consumer spending, favorable financial conditions, low inflation and historically low unemployment. All told, the data probably brought a sigh of relief for the Fed, allowing it to maintain its “patient” stance as concerns about a near-term downturn were questioned.

Falling gauges of inflation test the Fed’s hand. On the flip side to solid consumer data, an ongoing stream of data shows that signs of consistently rising prices for goods and services (aka inflation) is nowhere to be found. Last week’s Consumer Price Index (CPI) report showed a fourth consecutive reading of a minuscule +0.1%. The failure of core inflation to rebound to a 0.2% clip, last seen in 2018, has reinvigorated concerns among the dovish Fed members about achieving the Fed’s widely advertised 2% inflation goal. As such, Fed Chair Powell will have a tough time continuing to attribute weakness in inflation as “transitory” at the post-FOMC meeting press conference this week. The data also helps to erode the Fed’s do-nothing stance on interest rates. Think your life is tough? Try being the Fed.

US small business remains confident; big business less so. The National Federation of Independent Business survey of business optimism rebounded sharply in May to near-record levels. But leaders of large businesses were less ebullient, with the Business Roundtable CEO Economic Outlook Index falling for a fifth straight quarter. While the overall index remains at healthy levels, all three components of the survey – hiring, sales and capital investment – declined. Uncertainty over US trade policy and softening global growth were cited as factors behind the erosion in sentiment.

No US-China trade breakthroughs on the horizon. In the lead-up to an expected meeting between Chinese President Xi and US President Trump during the G20 summit in Osaka at the end of this month, expectations of a breakthrough toward a trade agreement are scant. As acknowledged by President Trump, such a meeting will likely not even take place. The President also said that if a meeting does not take place, his administration will immediately impose 25% tariffs on the remaining $300 billion in Chinese exports to the US, putting China’s leadership in a pickle. Settle in – it seems the months long trade spat is going to be wit us for awhile yet, but will eventually dissipate as the 2020 US Presidential election gets closer.

Germany auctioned 10-year government bonds at a record low -0.24%. Yes, you read that right. Investors are willing to loan the German government money for 10 years and pay 0.24% for the privilege of doing so. How can that be? Does it mean that things are going so well in Europe that investors are falling all over themselves to lend the government money? No. It means that buyers of German debt have no other viable alternative, and are firmly focused on return OF principal, not return ON principal. The record low yield reflects the world’s expectations of new stimulus from major central banks and also ensures that US Treasury yields won’t climb notably higher anytime soon, sans a unexpected breakthrough in US-China trade negotiations.

What to Watch this Week: The conclusion of the Fed’s scheduled monetary policy meeting on Wednesday will be front and center. Every word of Fed Chair Powell’s post-meeting press conference will be parsed for clues on how the central bank plans to walk the fine line between providing policy accommodation (aka rate cuts), if needed, while avoiding financial stability risks. While no one expects the Fed to cut or hike rates at this week’s meeting, everyone will use its contents to help form the outlook for such.

On the data front, coming on the heels of the upbeat retail sales report and better-than-expected industrial production data, the tone of Tier-2 economic data releases this week will likely be disappointing. Regional manufacturing data and homebuilders’ sentiment will reflect the impact of the latest increase in tariffs on Chinese imports, while housing starts could be affected by extensive flooding in the Midwest. One bright spot will be a projected rebound in sales of existing homes.

Take-Away: The Fed is faced with two forces that require completely opposite policy responses:

1) Solid consumer spending driving above-trend growth. A tight labor market and an unemployment rate near record lows. Income growth and low inflation supporting vibrant personal consumption. All factors calling for no change in rates or in some circles, even a rate hike.

2) Trade tensions exacerbating weakness in business sentiment and investment intentions, leading to downgrades of economic growth. A recent sharp slowdown new job creation, adding to uncertainties surrounding the sustainability and resiliency of the economic expansion. Tepid inflation pressures. At best, factors calling for a wait-and-see approach to rate changes, or at most, calling for a rate cut.

What’s the Fed to do? We’ll find out on Wednesday, when it will be all about the messaging. We’re betting the Fed will will walk a fine line by avoiding giving a clear nod to the possibility of rate cuts – a worrisome prospect for markets – which have driven Treasury yields to their lowest levels in years on expectations of several Fed cuts over the next year. In our view, the Fed committing to cuts would be premature, and won’t box itself into any rate cut commitment before this month’s Group-of-20 summit, where the beginnings of a resolution to the tariff standoff, while remote, is still a possibility. All in all, the market’s pessimism and pricing of multiple rate cuts is overdone. 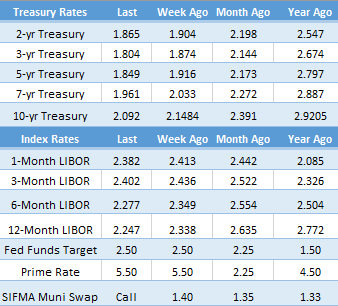 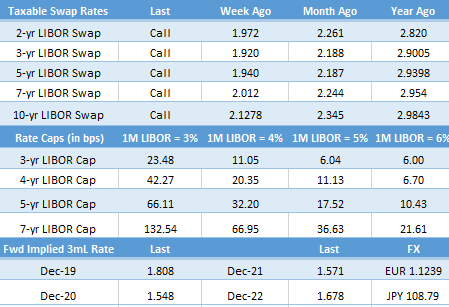 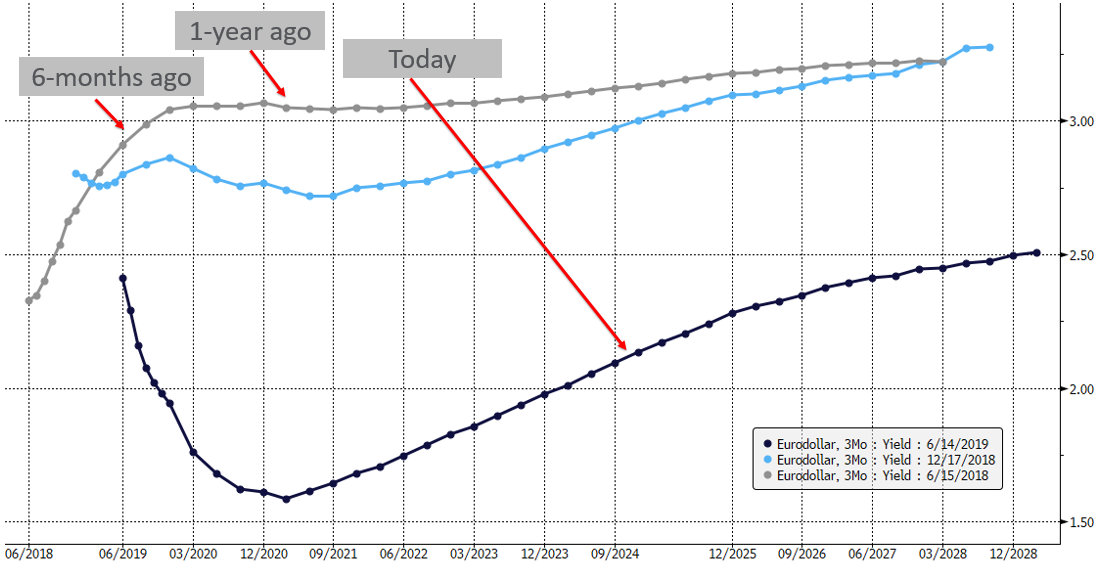 Swaptions: What Smart Borrowers Are Doing Now
Scroll to top